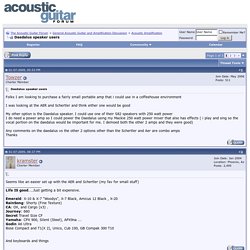 Tell him what you want to achieve in terms of amplification. Daedalus Speakers? Aloha Eric! 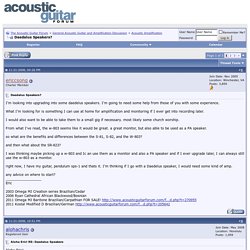 I've never played through or heard better speakers than my Daedalus 803's in over 40 years of playing live gigs through amplification. If you have any questions, please call Daedalus' Lou Hinkley. He's always available, very friendly and helpful. He'll answer all your questions. Hornloudspeaker Magazine. 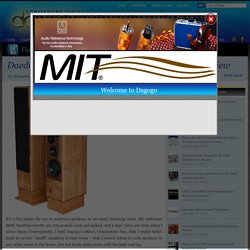 My reference B&W Nautilus 800Ds are 275 pounds each and spiked, and I don’t have any help when I move them. Consequently, I told Dagogo’s editor, Constantine Soo, that I really didn’t want to review “midfi” speakers in that room – that I would listen to such speakers in any other room in the house, but not in my main room with the high-end rig. As a result, I’ve had some very fine speakers to listen to and to pit directly against the Nautilus 800D. Daedalus Audio Ulysses. In 1994 I assembled an audio system consisting of a MicroMega CD player, Audio Research SP9 MKII preamp, Quicksilver Silver Mono tube amps, and ProAc Response 3 speakers. 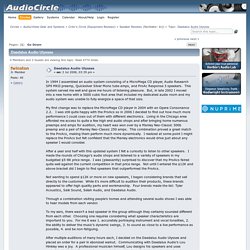 This system served me well and gave me hours of listening pleasure. But, in late 2002 I moved into a new home with a 5000 cubic foot area that included my dedicated audio room and my audio system was unable to fully energize a space of that size. My first change was to replace the MicroMega CD player in 2004 with an Opera Consonance 2.2. AudiogoN Reviews: Daedalus Audio Ulysses Speaker. In 1994 I assembled an audio system consisting of a MicroMega CD player, Audio Research SP9 MKII preamp, Quicksilver Silver Mono tube amps, and ProAc Response 3 speakers. 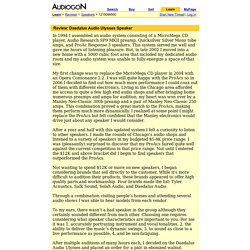 This system served me well and gave me hours of listening pleasure. But, in late 2002 I moved into a new home with a 5000 cubic foot area that included my dedicated audio room and my audio system was unable to fully energize a space of that size. My first change was to replace the MicroMega CD player in 2004 with an Opera Consonance 2.2. Daedalus Audio Argos v.2 Loudspeakers. I’ve long had an interest in Daedalus Audio’s loudspeakers. 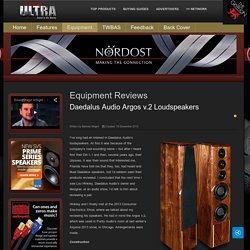 At first it was because of the company’s cool-sounding name -- but after I heard first their DA-1.1 and then, several years ago, their Ulysses, it was their sound that interested me. Friends have told me that they, too, had heard and liked Daedalus speakers, but I’d seldom seen their products reviewed. Daeduls audio ulysses. Zugspitz - Klang in Vollendung. GrimmAudio. Avantgarde Horntechnology Video - english. 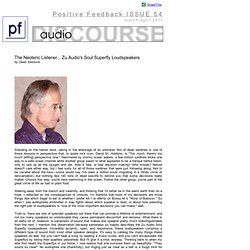 Zu Audio's Soul Superfly Loudspeakers by Dean Seislove Standing on the harbor dock, taking in the wreckage of an unbroken film of dead sardines is one of those lessons in perspective that, to quote rock icon, David St. Hubbins, is "Too much, there's too much [effing] perspective now. " Hammered by stormy ocean waters, a few million sardines broke one way to a safe ocean channel while another group swam to what appeared to be a tranquil harbor basin, only to use up all the oxygen and die. Was it fate, or bad decision making? Walking away from the stench and calamity, and thinking that I'd rather be in the warm earth than on a hook, I reflected on the consequences of choices. 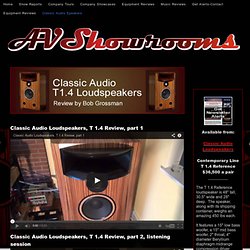 The speaker, along with its shipping container, weighs an amazing 450 lbs each. It features a 15" low bass woofer, a 15" mid bass woofer, 2" throat, 4" diameter Beryllium diaphragm midrange compression driver mounted to a tractrix horn designed by Bruce Edgar of Edgar Horn. The tweeter is a Beryllium super tweeter extending up to 45kHz.

The drivers are field coil designs and run on an external power supply with adjustable voltage. The sound of the loudspeaker is breathtakingly natural and realistic. Omega Speaker Systems Other True Sound Speakers. The Large and Small Ends of the Omega True Sound Speaker Series The Omega TS1 and TS3 [Italian version] 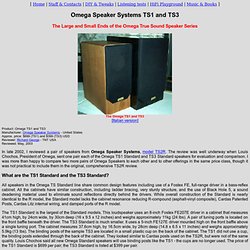 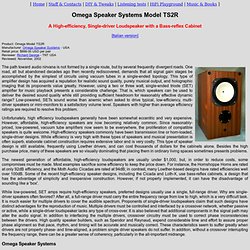 One road, all but abandoned decades ago then recently rediscovered, demands that all signal gain stages be accomplished by the simplest of circuits using vacuum tubes in a single-ended topology. ISE 2014: Tannoy Shows Its Improved Range of Prestige GR Series Home Loudspeakers. Omega Loudspeakers SuperHemp. "The SuperHemp was the first speaker I had designed with the 8" drivers," he continued. "As a large stand mount with good volume, it works out great with the new Alnico drivers in both vented and sealed box mode. In the SuperHemp design, the alignments I use are converted sealed box alignments so it's very easy to have the flexibility of both vented and sealed. It offers a little bump in mid bass and a great balance throughout the frequency range.

Honest Value. Salvage Audio. Reference room at Blumenhofer Acoustics Germany with Genuine FS 2.2. Burwell and Sons Loudspeakers. BURWELL & SONS. View ProductsBurwell & SonsSan Mateo Burwell & Sons are a revival of the audio innovation behind the great studio recordings of the 1960’s and 1970’s, from Brian Wilson and the Beach Boys, to Phil Spector and the Wall of Sound. Respected electricians with an affinity for Hi-Fi sound, Gordon Sr. and Gordon Jr. found they were left wanting when surveying existing performance audio products. To truly capture the powerful sound of the music that inspired them in the 70’s and today they figured they’d simply do it themselves, and began to source and vet the finest vintage speaker components every built, integrating them into hand-crafted wood cabinets.

The sophisticated, exotic wood marquetry horns combine a compelling aesthetic with a high level of audio performance. Each set of speakers built is one of a kind, and never reproduced exactly the same. At the heart of the Burwell & Son’s loudspeakers are the vintage Altec “Voice of the Theater” speaker components. Focal Tools free download. Eleven Horns. AudioKinesis. A-BOX™ heavy edition – thodio freedom hifi. Thodio A-BOX, the original .50 cal Ammo Can BoomBox... Urban Fidelity. Ojas Speakers. Audiotone - affordable hi-end audio. Experiences in setting Deep Hemp Subwoofers with the Super 8 or Maxhemps. I just wanted to post an update here just in case others were looking for similar information. For the Omega Deep Hemp Subwoofer, the frequency range on the subwoofer plate amp goes from 40 Hz to 180 Hz. Looking at the actual knobs, you will see divisions on the plastic knob itself.