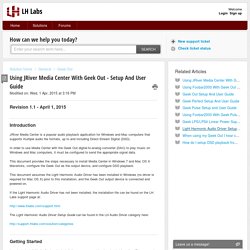 In order to use Media Center with the Geek Out digital-to-analog converter (DAC) to play music on Windows and Mac computers, it must be configured to send the appropriate signal data. This document provides the steps necessary to install Media Center in Windows 7 and Mac OS X Mavericks, configure the Geek Out as the output device, and configure DSD playback. This document assumes the Light Harmonic Audio Driver has been installed in Windows (no driver is required for Mac OS X) prior to this installation, and the Geek Out output device is connected and powered on. If the Light Harmonic Audio Driver has not been installed, the installation file can be found on the LH Labs support page at: Getting Started Installation and Configuration – Windows 7. Raspberry Pi Multi-Room Music Player. For a long time I have been trying to figure out what I need for a multi-room music set up. 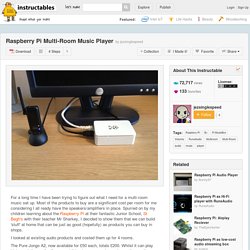 Most of the products to buy are a significant cost per room for me considering I all ready have the speakers/amplifiers in place. Spurred on by my children learning about the Raspberry Pi at their fantastic Junior School, St Begh's with their teacher Mr Sharkey, I decided to show them that we can build 'stuff' at home that can be just as good (hopefully) as products you can buy in shops.

I looked at existing audio products and costed them up for 4 rooms. The Pure Jongo A2, now available for £50 each, totals £200. Whilst it can play high resolution audio, if you want it to stream a music service on its own it uses their own service Pure Connect. I am already using Spotify on PC, Mobiles and a Smart TV Box, so whatever system I end up with I would like the option to stream Spotify. The range that started it all, Sonos, offers the Connect as a means of streaming to existing systems.

Review: Raspberry Pi 2 as Music Streamer. A couple of months back the Hewlett-Packard laptop that served me as a media player decided to leave this world for a better place (the recycling bin). 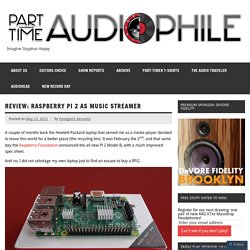 It was February the 2nd, and that same day the Raspberry Foundation announced the all new Pi 2 Model B, with a much improved spec sheet. And no, I did not sabotage my own laptop just to find an excuse to buy a RPi2. The Raspberry Pi is a credit-card-sized single-board computer, the first edition of which launched on February 2012. Computer Audiophile - 20 Audio Applications To Enhance Your Music Listening Experience. Invariably, whenever I meet fellow computer audiophiles at audio shows or dealer events we always ask each other what the other is using. 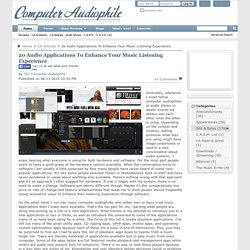 Depending on the context and location, asking someone what they are using might have illegal undertones or lead to a nice conversation about audio systems. I enjoy hearing what everyone is using for both hardware and software. For the most part people seem to have a good grasp of the hardware options available. When the conversation turns to software I am usually a little surprised by how many people have never heard of some very popular applications.

It's like some people selected iTunes or MediaMonkey back in 2007 and have never wondered or cared about anything else available. Computer Audiophile - 20 Audio Applications To Enhance Your Music Listening Experience. Support - Geek Out. A Summer Soundtrack: iFi, HTC and Superlux. Don’t know about you, but I love listening to music. 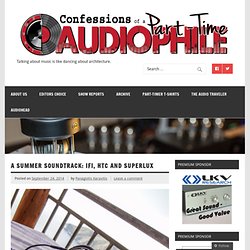 Not just the radio when driving or the occasional record. I start my day with music and one too many times I refuse to hit the bed just to enjoy another LP in the very late hours. Now, there are two problems. I don’t like all kinds of music. Elevator music is not on my list. Nothing of all this is new and we all have a set of headphones or in ear monitors (IEM); worst case scenario would be the ones that come with the cell phone. For this summer I used the following, and let me say this straight up, it’s an amazing combo for the money: HTC’s one M8 mini 2 feeding the iFi nano iDSD DAC and headphone amp, with a pair of Superlux 681 evo headphones. 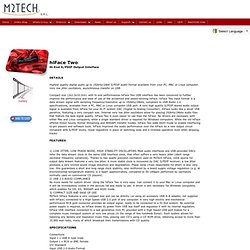 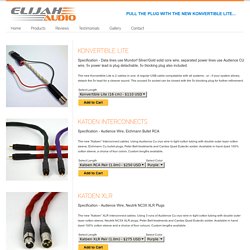 The new Konvertible Lite is 2 cables in one. A regular USB cable compatabile with all systems - or - if your system allows, detach the 5v lead for a cleaner sound. The unused 5v socket can be closed with the 5v blocking plug for further refinement. DSD-Ready DACs. DSD-Ready DACs. AudioStream. Computer Audiophile. Plugins for Audiophile Music Players. Betraying the analog roots of audio, this time I’m diving into plug-ins, those fun and versatile bits of code that can enhance your digital audio listening experience.

The first time I heard about plug-ins was when Adobe added that feature to Photoshop version 2. In the audio world, Digidesign took what was at the time a rather nasty sounding application named Pro Tools and drove it to the number one Digital Audio Workstation on earth, in no small part thanks to their early inclusion of a plug-in SDK. AccurateRip. Exact Audio Copy.