ALTEC LANSING Speaker. Jeff checking in … a peek into the crystal ball at what is to come! » Jeff's Place. There’s a lot of exciting audio projects coming up which I think you’ll find very interesting. 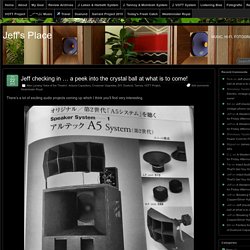 The one that’s occupying a lot of my attention right now is the upcoming Altec Lansing A5 Voice of the Theatre project. In my introductory post I mentioned that I had chosen the Altec Lansing 515E ceramic magnet low frequency driver for the project, which was also the choice of John Stronczer in his A5 project that he wrote up for Sound Practices way back when. There was good reason for that particular choice, as the 515E goes 5Hz lower than the classic 515B Alnico low frequency drivers, and its lighter cone paper reportedly makes its response smoother and more articulate, and from a maintenance standpoint you don’t have to worry about remagnetizing it like you do with the Alnico magnet 515B drivers. The 515E ceramic magnet drivers are also less than half the price of the Alnico magnet 515B drivers. All good. Did I mention how exciting these ideas are? WRSE with WE16GA internal wiring. 311-Series-Data.pdf. 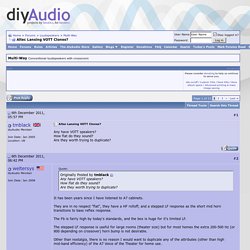 When I was a teen, I worked at a TV / hifi store after school and became sort of friends with a salesman that worked at a competitor’s real hifi store. I was stunned by the sound in the apartment and sitting about 8 feet away from a pair of such large cabinets seemed “right’. Anyway some years back a friend had a stock A-7 that he wanted to make better sounding and louder if possible.

Here is the before and after curves. Subjectively while I only listened to it for a few days but I was surprised that it struck me that it sounded much like one of our synergy horns, I suppose from the lack of crossover phase shift and hf driver. It had been my intention to write an “upgrade” article back then; I took pictures and had made some notes on what I did. 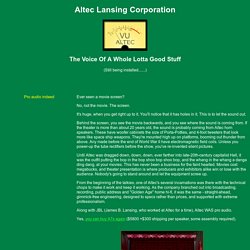 A2s, but note the double horns for 180-degree dispersion. The split-surround auditorium here is unusually short and wide, fitting inside a deeply curved screen, and all housed in a true, Bucky-Fuller-style, Geodesic dome. The vertical lines in this original screen were due to its construction out of carefully placed strips, which solved a problem with light bouncing back onto screens with such extreme curves. The projection booth is long, claustrophobically narrow, and (necessarily) curved. It has Cinerama's three separate boothlets called "Able," "Baker," and "Charlie" (from old World War II radio phonetics), each with its own ports. 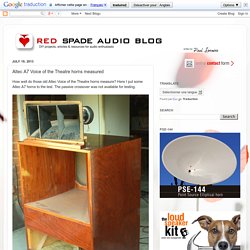 Here I put some Altec A7 horns to the test. The passive crossover was not available for testing. Tested: Altec 2-way horn system redux. Truth be told, I was never fully satisfied with the performance of the Altec 2-way which is why I never uploaded the article in the Arkiv. 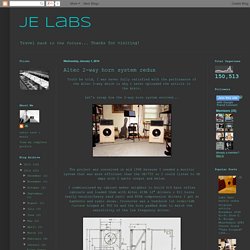 Let's recap how the 2-way horn system evolved... The project was conceived in mid 1998 because I needed a monitor system that was more efficient than the OB/755 so I could listen to SE amps with 2 watts output and below. I commissioned my cabinet maker neighbor to build 614 bass reflex cabinets and loaded them with Altec 419A 12" drivers + 811 horns (early version/heavy sand cast) and 804A compression drivers I got at hamfests and radio shows. Altec Large HF Drivers. Great Plains Audio's Homepage. Yet Another Altec Page.

What is the cut off frequency for the Altec A7 and A4 horns? Altec Lansing A7. Altec Valencia 846B Completed Restoration Sound Audition. Inner Magazine - My Altec Valencia Iconics. Nowadays the Altec is mostly known as a manufacturer of cheap audio devices for the computer audio and other personal audio use.

However, during the good old days Altec was known as a manufacturer for serious audio systems both public and home audio, and huge horn-loaded speakers were their trademark. Valencia Iconic is the descendent model of the 1937 original and legendary Iconic loudspeaker. The original Iconic was used mainly in serious mono systems. Valencia Iconic was manufactured only for a short period of time during the 60's prior to Valencia 846A and 846B models, both more common but still very respected. Silly prices are asked at the ebay and by some vintage brokers.