Smuggling in Hampshire and Dorset: the New Forest, Bournemouth & Poole. Guide-Book: Southern England Contraband run all along this stretch of coast quickly found its way up to the New Forest. 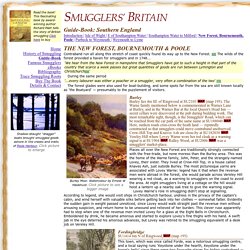 The wilds of the forest provided a haven for smugglers and in 1748... 'We hear from the New Forest in Hampshire that Smugglers have got to such a height in that part of the country that scarce a week passes but great quantities of goods are run between Lymington and Christchurch' Smuggling in Hampshire between Southampton Water and Milford. Guide-Book: Southern England Immediately to the west of Southampton Water the mainland forms a kind of peninsula, hemmed in on the west side by the Beaulieu river. 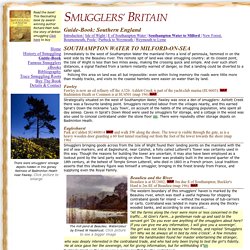 This remote spit of land was ideal smuggling country: at its closest point, the Isle of Wight is less than two miles away, making the crossing quick and simple. And over such short distances, a signal flashed from a lantern instantly warned of danger, so that a landing could be diverted to a safer spot. Policing this area on land was all but impossible: even within living memory the roads were little more than muddy tracks, and visits to the coastal hamlets were easier on water than by land. Fawley. Smuggling on the north coast of Cornwall and Devon. Guide-Book: South-West England Smuggling boats landed goods from the continent on the south coast of the peninsula in all seasons, but the north coast was used for continental traffic principally during the summer, when the Atlantic storms had abated. 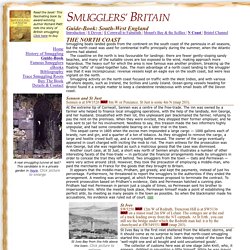 The coastline on the north is less favourable for landings: there are fewer gently-sloping sandy beaches, and many of the suitable coves are too exposed to the wind, making approach more hazardous. Smuggling on Anglesey & in north Wales. Moelfre is at SH5186 and Amlwch at SH4492 on the NE coast of Anglesey (map 114) Smuggling to Anglesey probably reached its zenith in the middle of the 18th century , and was largely unhampered by the efforts of the excise authorities. 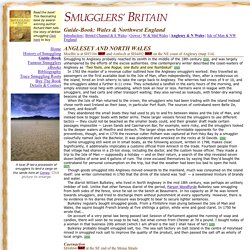 One contemporary writer described the coast-waiters of Anglesey as 'Two fools, one Rogue, one Bully and one Numbskull' Smuggling in Mounts Bay, Cornwall, and the Scilly Isles. Guide-Book: South-West England Beyond the Lizard from Falmouth is the golden curve of Mounts Bay, with St Michael's Mount set like a jewel on the western side. 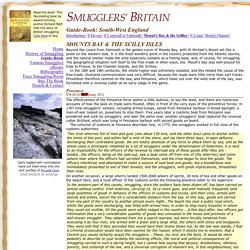 It is the most westerly point in the country protected from the Atlantic storms, and the natural shelter made the area especially suitable as a fishing base, and, of course, for smuggling. The geographical situation lent itself to the free-trade in other ways, too. Mount's bay was well-placed for trips to France, to the Channel Islands, and the Scillies. Smuggling on the south coast of Devon. Guide-Book: South-West England Beer & Jack Rattenbury Beer is at SY2289. 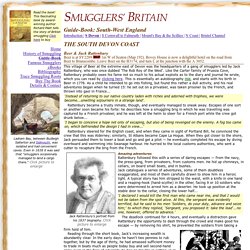 Smuggling in Dorset from Purbeck to Weymouth. Guide-Book: Southern England To the west of Poole harbour lies the Isle of Purbeck, famous for its marble workings. 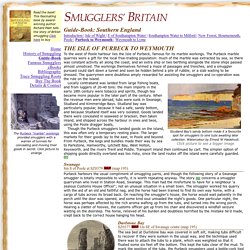 The Purbeck marble quarries were a gift for the local free-trading population: much of the marble was extracted by sea, so there was constant activity all along the coast, and an extra ship or two berthing alongside the stone ships passed almost unnoticed. The workings themselves formed a maze of passages and trenches, and a smuggler pursued could dart down a tunnel and soon be hidden behind a pile of rubble, or a slab waiting to be dressed. The expansion and final suppression of smuggling in Britain. Britain’s Smuggling History In the absence of really effective opposition, it was inevitable that wholesale evasion of duty would expand. 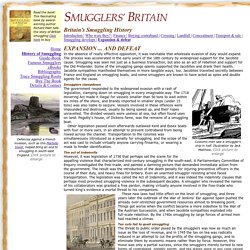 The process was accelerated in the early years of the 18th century by widespread support for the Jacobite cause. Smuggling was seen not just as a business transaction, but also as an act of rebellion and support for the Old Pretender. Some of the smuggling gangs openly supported the Jacobites and drank their health. Jacobite sympathies manifested themselves in more tangible ways, too. Smugglers clampdown. Introduction to Britain's smuggling history. Britain’s Smuggling History Ask anyone to describe an 18th-century smuggler, and they will probably tell you about a Cornishman called Tom dressed in long boots and a striped jersey. 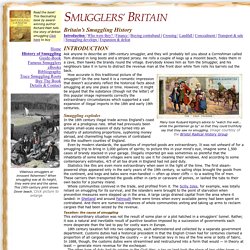 Who were Britain's smugglers? Britain’s Smuggling History If you've ever spent time delving into the local history of a coastal area, you'll sooner or later have come across notes to the effect that 'everybody in these parts is a smuggler' or 'every house is a smuggler's', and while many such reports were wildly exaggerated, it's probably true that, at certain times and in certain areas, everybody really was involved in smuggling in one way or another, or at least stood to benefit by its continuation. 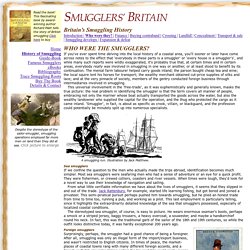 The menial farm labourer helped carry goods inland; the parson bought cheap tea and wine; the local squire lent his horses for transport; the wealthy merchant obtained cut-price supplies of silks and lace; and at the very pinnacle of society, members of the gentry conducted foreign business through intermediaries involved in smuggling. Sea smugglers If we confine the question to the men who actually made the trips abroad, identification becomes much simpler. The stereotyped sea smuggler, of course, is easy to picture. How Britain's smugglers financed a smuggling venture. Britain’s Smuggling History Smugglers' cutomers paid for their illegally imported goods on delivery, so clearly any would-be smuggler had to find money to buy the goods abroad.

There were so many ways of financing a smuggling trip that it's difficult to make any accurate generalisations about how the capital was raised. Every possible form of transaction short of credit cards was pressed into use at one time or another, but the earliest method of funding was probably simple barter. The Kentish and east-coast smugglers would ship out bales of wool to a destination in Normandy, and return packed to the gunwales with tubs of wine or bales of silks and lace.

No money changed hands — it was a simple and direct arrangement. How Britain's smugglers bought contraband abroad. Britain’s Smuggling History Once finance for a smuggling trip had been arranged, a representative appointed by the entrepreneur of the smuggling trip often travelled with the outgoing ship to the continent to purchase the contraband. However, this was not always considered necessary, and the purchase might have been entrusted to the ship's master.

A common arrangement was to have agents abroad, who could strike a bargain with the suppliers, and have a cargo stacked ready for loading on the quayside when the tide brought the vessel into port. Another option was for a representative to cross the channel alone by some legitimate vessel such as a postal packet, and then on arrival to charter a French or Dutch boat and crew.

It's no coincidence that some of these are now familiar destinations for cross-channel travellers — then as now, the ports were conveniently situated for a short crossing, and had fine harbours. Man-size packaging. Smuggling on Solway Firth and Galloway coasts, Scotland. Guide-Book: Scotland Annan is on the A75 8m W of Gretna; Waterfoot and Kenziels are just S of the town at NY1965 Ruthwell is 8m farther W (map 85). Smuggling around Chichester, West Sussex. Guide-Book: South-East England The far west of Sussex has a particularly black reputation in the history of smuggling, on account of a number of particularly brutal murders that took place here. (see Barbarous Usage below). However, these notorious incidents were in some respects the doing of strangers to the area, and by contrast, the local people kept a characteristically low profile in their smuggling activities. They were aided in this by the nature of the coastline, which changes progressively west of Bognor, from straight flat beaches to a fretwork of sandy inlets and natural harbours.

How smuggling developed in Britain from the 13th to 19th century. Britain’s Smuggling History A description of a smuggling run draws together elements that might have been separated in time or geography, and gives no sense of how smuggling methods evolved in the course of the eighteenth and nineteenth centuries. So it's worth now turning briefly to look at how changing patterns of taxation and prevention shaped smuggling practice. Obviously, smuggling as a business proposition requires something to smuggle — contraband that on crossing a border, is taxed, or levied, subject to a duty — or even banned and impounded. How smugglers carried contraband back to Britain. How smugglers landed their contraband on Britain's coasts. Britain’s Smuggling History A skilled master of a free-trade ship was expected not only to bring the cargo to English shores, but to do it to a timetable that would make even the Swiss look unpunctual.

Hiding places where smugglers concealed contraband. Smuggling gangs of East Sussex and their inland bases. Smuggling in east Kent: Deal, Dover and Folkestone. Guide-Book: South-East England As any modern traveller knows, the shortest channel crossing is from the east Kent coast to northern France, and this blindingly obvious fact had not escaped the early smugglers, either. Smuggling in Suffolk. Guide-Book: The East Coast The major centre for smuggling in Suffolk was perhaps surprisingly not on the coast, but some 40 miles inland: the charming market town of Hadleigh gave its name to one of Suffolk's most successful smuggling gangs.

At full strength, the gang numbered 100 men, each turning out with two horses. Such a force would have been almost unstoppable, even when the customs authorities had military support. Certainly, the precise descriptions of the gang's activities recorded in the custom house letters suggests that the authorities could do little more than watch and count the horses: 20 May 70 horses with dry goods landed at Sizewell 27 May 27 horses with wet goods and 36 loaded with tea landed at Sizewell 11 June 60 horses most with brandy, 53 with tea 2 July 83 horses with tea, 9 waggon loads wet goods 12 July 50 horses tea 17 Sept 120 horses — 100 smugglers 10 Nov 50 horses dry goods, 1 cart w/wet goods 23 Nov at least 40 horses, mostly dry goods. Smuggling on Thanet and northeast Kent. How British smugglers transported contraband inland.