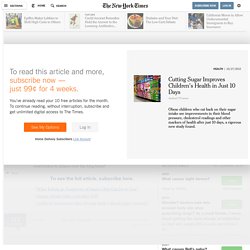 The new research may help shed light on a question scientists have long debated: Is sugar itself harming health, or is the weight gain that comes from consuming sugary drinks and foods mainly what contributes to illness over the long term? In the new study, which was financed by the National Institutes of Health and published Tuesday in the journal Obesity, scientists designed a clinical experiment to attempt to answer this question.

They removed foods with added sugar from a group of children’s diets and replaced them with other types of carbohydrates so that the subjects’ weight and overall calorie intake remained roughly the same. After 10 days, the children showed dramatic improvements, despite losing little or no weight. An Isolated Tribe Emerges from the Rain Forest. Redirect?url= When Jenna Weiss-Berman left her job as head of Buzzfeed Audio earlier this year, she hoped that she could attract a little startup capital for her new podcast startup. 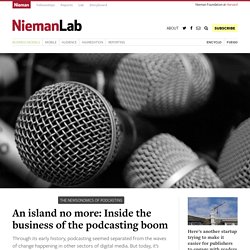 Indeed, she could: Within four weeks, no fewer than four venture capital firms began offering her and Pineapple Street Media cofounder Max Linsky funding. How hot is podcasting? Stupid V.C. money hot. What life is like behind bars for O.J. Simpson Prisoner 1027820. Redirect?url= Camera companies, like traditional phone manufacturers, dismissed the iPhone as a toy when it launched, in 2007. 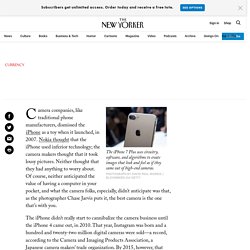 Nokia thought that the iPhone used inferior technology; the camera makers thought that it took lousy pictures. Neither thought that they had anything to worry about. Of course, neither anticipated the value of having a computer in your pocket, and what the camera folks, especially, didn’t anticipate was that, as the photographer Chase Jarvis puts it, the best camera is the one that’s with you. The iPhone didn’t really start to cannibalize the camera business until the iPhone 4 came out, in 2010. That year, Instagram was born and a hundred and twenty-two million digital cameras were sold—a record, according to the Camera and Imaging Products Association, a Japanese camera makers’ trade organization. The rise and fall of Rocket Internet in India. The Really Big One. Penny Lane – Liverpool, England. On the corner of Liverpool’s Church Road and Smithdown Place there is an abandoned building that was once a bus shelter. 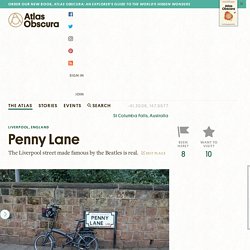 It was here that a young Paul McCartney changed buses to go visit John Lennon, and from here that the lads hopped on double-deckers to get downtown to play the Cavern Club and visit Brian Epstein’s record shop. At this intersection begins Penny Lane, famous as the inspiration for McCartney’s song of the same name. The “shelter in the middle of a round-about” is at the top of the street, across from a shop where the barber showed photographs “of every head he’s had the pleasure to know”. It’s still a barbershop today, but that barber and his photographs are long-gone. There is other music history along Penny Lane, apart from the song. There's New Evidence in the Mystery of Neil Armstrong's Missing 'A'

Armstrong on the moon. 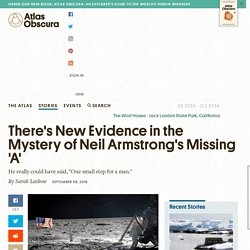 (Photo: NASA) When Neil Armstrong walked on the moon in 1969, he uttered a series of words. “One small step”…but for whom? Most famously, the quote is “One small step for man, one giant leap for mankind.” Grave in the Road – Hearne, Texas. The town of Hearne is known as "The Crossroads of Texas" because it sits at the intersection of several highways and railroads. 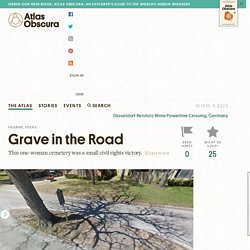 The little town used to be a hub of transport and commerce, but is now fairly sleepy pit stop. Amid the suburban houses and grassy lawns though, there is an unusual sight: a body buried in the middle of the street. Florida Man Fends Ten Sharks Off With Fishing Pole. Sharks! 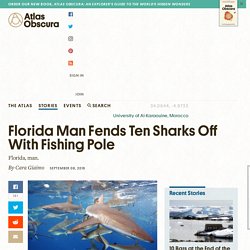 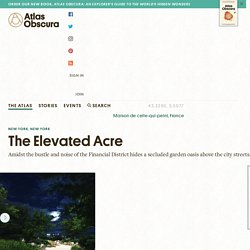 In a city where space is at a premium, there remains hidden away a lush garden of solitude, known to only a very few. Remarkably this pleasant, quiet meadow can de found in the jostling streets of the busy Financial District in Lower Manhattan. Or more specifically, above it! Cours des Miracles (Court of Miracles) – Paris, France. The poor and homeless population of Paris ballooned during the reign of Louis XIV, from 1654 to 1715, leading to terrible slums in the city center where the unemployed and destitute relied on begging to survive. 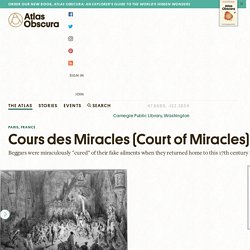 The least fortunate of Paris would venture out onto city streets during the day wearing guises like physical disability or disease in hopes of evoking sympathy. But come nightfall, when the poor returned home to the slum and there was no more need to feign illness, they were miraculously "cured" of these ailments. The blind could see; the lame could leap. Hence one of the poorest and most notorious 17th century slum districts of Paris became known as the Cours des Miracles, or Court of Miracles.

In the late 18th and early 19th centuries, the large slums were demolished during the Haussmannisation renovation of Paris following the French Revolution. Pizza Vending Machines Are Now Operational in Florida. Would you buy pizza from a vending machine? 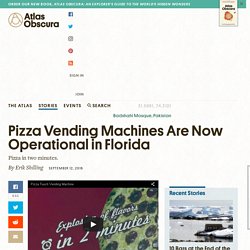 An Italian company is betting just that, testing out a couple of the machines near Orlando, Florida, as well as one in nearby Lakeland, according to News13. The pizza costs $6, and is made by the machine in about two minutes. For now, the company, called Pizza Touch, is testing out the concept, with plans to expand if it proves successful. The World's Oldest Snowshoe Sat in an Italian Cartographer's Office for 12 Years. A very old snowshoe. (Photo: Provincia di Bolzano) Thirteen years ago, Simone Bartolini was mapping Italy's border with Austria. High up in the mountains, at more than 10,000 feet, he found a wooden object—birchwood rounded into a snowshoe. Dolphins Have Human-Like Conversations Underwater, Says Science.

Blah, blah, blah... (Photo: David B. /CC BY-SA 2.0) We may be getting one step closer to figuring out what dolphins are always gossiping about. According to the Telegraph, for the first time ever, researchers have recorded a human-like “conversation” between two dolphins, using specific “words” to form what seem like sentences. It’s no secret that dolphins and whales have a complex and robust system of communication, that coincidentally makes for great new age relaxation albums.

Why Thousands of Catalytic Converters Are Stolen from Cars Each Year. (Photo: Public domain) Catalytic converters have been standard in most cars since 1975, when the Environmental Protection Agency mandated stricter emissions regulations for automobiles. They're a part of your car that, like an alternator or water pump, you don't think too much about. 6 New Entries Added to Oxford English Dictionary in Honor of Roald Dahl. Entries for scrumdiddlyumptious, human bean, golden ticket, oompa loompa, the "witching hour," and Dahlesque have each been added to the Oxford English Dictionary, the OED said yesterday, making permanent a few of beloved author Roald Dahl's contributions to the English language. The words will be familiar to anyone who's read The BFG, Charlie and the Chocolate Factory, or other classic works from Dahl's oeuvre. Each will now be added to the OED, or, in the case of "golden ticket," a new sub-entry in an existing entry.

(The first documented golden ticket was given to the 18th-century English painter William Hogarth, in exchange for perpetual admission to the Vauxhall Gardens.) The words were added in honor of Dahl's centenary, as the author was born on this day 100 years ago. America's Oldest Lighthouse Has Turned 300. Boston Light, which turns 300 years old today. (Photo: Massachusetts Office of Tourism/CC BY-ND 2.0) Three hundred years ago today, a lighthouse keeper made his way across Boston Harbor to Little Brewster Island. Found: One of the Largest Meteorites Ever. Did We Just Witness the Birth of a Black Hole? There's a Big Sperm Shortage in New Zealand. The World's Oldest Man is About to Have a Belated Bar Mitzvah. A Retired Teacher Built a Perfect Scale Map of China on His Terrace. Conductor Stops Train After His Work Shift Ends, Stranding 109 Passengers Mid-Trip. Arctic Sea Ice Is At Its Second Lowest Minimum on Record. The Mystery of Van Gogh's Final Breakdown Will Probably Never Be Solved.