This Parking Lot Is Paved With Solar Panels. Image courtesy Scott and Julie Brusaw The Idaho couple who created an innovative road surface made of solar panels is back with a prototype, and they’re looking to Indiegogo for additional funding. 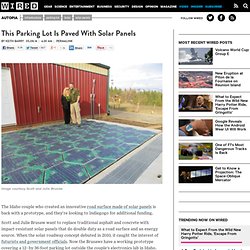 Scott and Julie Brusaw want to replace traditional asphalt and concrete with impact-resistant solar panels that do double duty as a road surface and an energy source. When the solar roadway concept debuted in 2010, it caught the interest of futurists and government officials. Now the Brusaws have a working prototype covering a 12- by 36-foot parking lot outside the couple’s electronics lab in Idaho. The new panels look quite different from the prototype we saw almost four years ago. According to the Brusaws, the new glass-covered panels have been tested for traction and impact resistance, and can sustain a 250,000-pound load. Up until this point, the project has been financed through a $50,000 private grant and two phases of funding from the Federal Highway Administration. 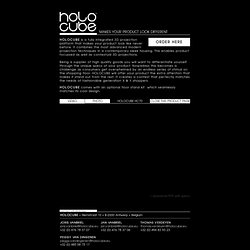 It combines the most advanced modern projection techniques in a contemporary sleek housing. This enables product focussed as well as contextual 3D projections. Being a supplier of high quality goods you will want to differentiate yourself through the unique specs of your product. Nowadays this becomes a challenge as consumers get overwhelmed by an endless series of stimuli on the shopping floor. HOLOCUBE will offer your product the extra attention that makes it stand out from the rest. HOLOCUBE comes with an optional floor stand kit which seamlessly matches its cool design. Oculus Rift Lets You See What It Would Be Like To Swap Genders (NSFW) TapTap Wristband Connects Couples With Wireless Vibrations. Nowadays you can reach whomever you want through various modes — a Facebook message, a tweet, a text message and a phone call, just to name a few. 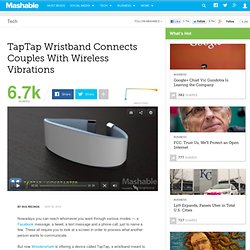 These all require you to look at a screen in order to process what another person wants to communicate. But now Woodenshark is offering a device called TapTap, a wristband meant to help people communicate without the need of a screen. Targeted toward people in a relationship, the wristband allows users to communicate through — you guessed it — taps.

One user taps the wristband and the other feels the wristband vibrating as it relays those taps. For $130, you get two wristbands, which can run up to seven days on one charge, according to the company. The product works with Android smartphones with Bluetooth 2.1 and above, as well as the iPhone 4S and newer. Woodenshark's wristband also comes in variety of patterns. "People can create their own language," he said. At the time of this writing, the team had raised $74,888 out of a $130,000 goal. 6 Substances That Wipe Their Ass With the Laws of Physics. #3. 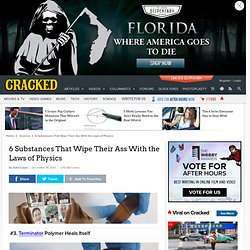 Terminator Polymer Heals Itself A Rekondo et al, Mater. Horiz., via Youtube The self-healing substances that science has managed to develop in the past have been relatively shoddy affairs, fixing small cracks with resin in a manner that is closer to the way your body slowly heals small wounds than it is to full-on T-1000 "this should not be" awesomeness. What we're about to show you is an altogether different beast. If you didn't watch the video, here's a play-by-play: First, they cut a chunk of the stuff in half. Then, they put the pieces back together and go get some lunch. A Rekondo et al, Mater. And ... holy shit, this should not be! Finally, a terrified disbeliever grabs the restored piece and stretches it, trying to find evidence of the wound, but discovers nothing. A Rekondo et al, Mater. Then the rest of the video is pretty much just the frightened scientists crying, "What have we done?! Hey, speaking of T-1000 ... #2. Cornell University/Luo Lab, via Youtube.