Slim framework and twig template tutorial. The tutorial on Eloquent ORM and Slim PHP framework ended at the models level. 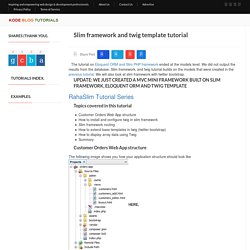 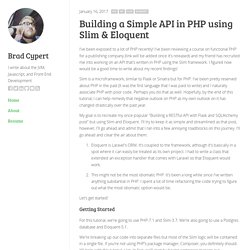 I've been reviewing a course on functional PHP for a publishing company (link will be added once it's released) and my friend has recruited me into working on an API that's written in PHP using the Slim framework. Slim, twig and Ajax (JSON) - Questions - Slim Framework. Hi all, I am trying to wrap my brain around what the best is for using an Ajax request and appending it to the dom.So far I have tried the following:- with jQuery I made a function 'renderFields' - that handles the data- in the controller I render a twig view and 'return this'. 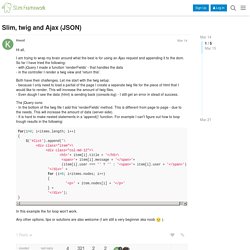 Both have their challenges. Let me start with the twig setup:- because I only need to load a partial of the page I create a seperate twig file for the piece of html that I would like to render. This will increase the amount of twig files.- Even dough I see the data (html) is sending back (console.log) - I still get an error in stead of success.