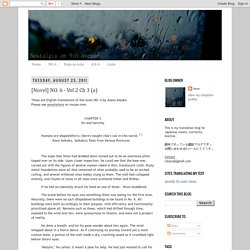 Please see annotations on mouse-over. CHAPTER 3 Sin and Sanctity Humans are shapeshifters; there's naught that's not in this world. [1] - Ihara Saikaku, 'Saikaku's Tales from Various Provinces' The slope that Shion had skidded down turned out to be an enormous pillar tipped over on its side.

Upon closer inspection, he could see that the base was carved out with the figures of several women robed in thin, translucent cloth. If he had accidentally struck his head on one of those― Shion shuddered. The scene before his eyes was something Shion was seeing for the first time. He drew a breath, and let his gaze wander about him again. "Nezumi," he called. "You're getting sharper," said a voice somewhere from above. Nezumi jumped down from his spot several metres up.

"You're light on your feet," Shion commented. "I am most humbled by your gracious compliments, your Highness. " "Quite something," Shion quipped. "Hm? " "Yup. "I guess so. Log in. Koizora Chapter 4 Page 1. Rei Kawakubo. Since she launched her Comme des Garçons (French for "like the boys") fashion brand 41 years ago, Rei Kawakubo has always played by her own rules. 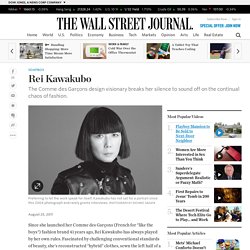 Fascinated by challenging conventional standards of beauty, she's reconstructed "hybrid" clothes, sewn the left half of a jacket onto the right half of a different jacket and designed asymmetrical dresses made from her own vintage scarves—and that was all just in her last women's presentation. It's never just about creating something to wear, but rather expressing an idea. The 68-year-old, whose conceptual outlook has inspired everyone from Azzedine Alaïa to John Galliano and who still often clocks 12-hour days, seven days a week, is famous for saying she became a designer "to make a living. " While that may be true, Kawakubo has also immeasurably changed the greater fashion landscape. All kinds of business models are necessary to suit all kinds of tastes and needs.

My work has never been as an artist. Rei Kawakubo. Rei Kawakubo went to university and studied art and literature, like a lot of bright girls do. 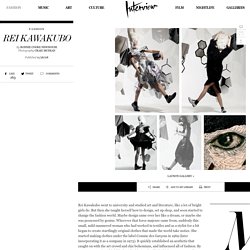 But then she taught herself how to design, set up shop, and soon started to change the fashion world. Maybe design came over her like a dream, or maybe she was possessed by genius. Wherever that force majeure came from, suddenly this small, mild-mannered woman who had worked in textiles and as a stylist for a bit began to create startlingly original clothes that made the world take notice. She started making clothes under the label Comme des Garçons in 1969 (later incorporating it as a company in 1973).

It quickly established an aesthetic that caught on with the art crowd and chic bohemians, and influenced all of fashion. RONNIE COOKE-NEWHOUSE: Journalists sometimes describe you as intellectual, ascribing to you a kind of rigorous, cerebral approach to fashion. REI KAWAKUBO: I am not conscious of any intellectual approach as such. RCN: Next year the company will be 40 years old. Haruki Murakami. Becoming Andrej(A) Taken from the Summer 2015 issue of Dazed: “For me, it was an option of doing this or living a fake life. 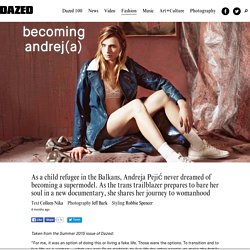 Those were the options. To transition and to live life as a woman – what you are! Or to pretend, to live life for other people, to make the family happy, to fit into society’s standards. But that’s not a life. Andreja Pejić’s answer comes serenely as vapour, delivered while setting down a cup of tea. No, she wasn’t. Nicki Minaj: her Minajesty. In a manicured cul-de-sac in LA’s Baldwin Hills, Nicki Minaj’s matte black Maybach lurks in the shimmering heat – doors flung open to let the still air circulate and privacy curtains pulled back. 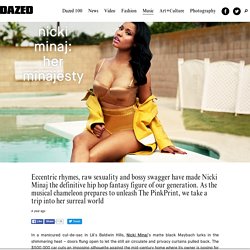 The $500,000 car cuts an imposing silhouette against the mid-century home where its owner is posing for today’s shoot. In the driveway, her personal chauffeur, bodyguard and day-to-day manager keep watch, hovering patiently while Minaj acts the suburban housewife inside. Ripping off yellow rubber gloves in order to slip into a Balmain two-piece, Minaj insists the scenario isn’t quite the American daydream that it seems. “I’m in a surreal world, but I’m so normal in it,” she says, striding across the yard in gold Giuseppe Zanotti heels. As the Crow Flies - 179. Yohji Yamamoto goes chaotic OTAKU for Fall 2014 ◎ヲタク化したヨージヤマモト2014年秋冬. 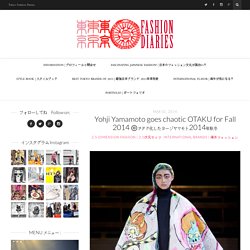 Avatars, pixels, characters, eyeballs, cosplay, pop-objects and analog media motifs are often plastered together in a way that purposely looks like a job done on MS Paint. So what an incredibly unexpected surprise to see Paris’ adopted grandfather Yohji Yamamoto who is known for his blacker-than-a-black-hole clothes dipping into the same psychotropic Akihabara-inspired fashion..! 東京の自称オタクデザイナーのコレクションで見られるように、デジタルポップコラージュはすさまじい。 アバターやピクセル、目玉、キャラクター、ポップなオブジェやアナログちっくなモチーフがまるでわざとマイクロソフトペイントを使ったかのように塗られているカオス。 だから、パリのゴッドファザーのような存在である山本耀司のパリコレを見てほんとうに驚いた！ When the photos for Yohji Yamamoto’s Fall 2014 collection started trickling out, I thought people had their hashtags wrong. 山本耀司の2014年秋冬コレクションの写真がネットに流れた時、多くの人が「ハッシュタグ、間違ってない？ このようなオタクっぽいアートをおとしたファッションはミキオサカベ、ケイスケカンダ、ジェニーファックス、クロマ、ハルタそしてShojo no tomoなどの東京のデザイナーが最近提案しているものと似ている。 Toilet paper トイレットペーパー WHOAH THIS IS CRAZY PRETTY.