Things to do in Fremantle, Perth. What’s in Gold Coast besides what you’ve known? Hobart Sightseeing & Hobart River Cruises. Hobart hosts a conglomeration of everything under the sun – right from scenic harbour views, delectable cuisine, modern architecture and festive parties to exceptional natural beauty, ancient cultural traits and inspiring art. 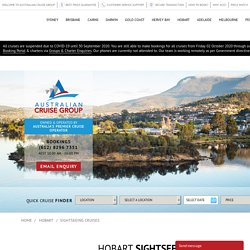 What started off as a settlement of the semi-nomadic Mouheneener tribe, who are now known by the name 'Palawa', later turned into a colonial outpost for the British, and finally took the form of the dynamic city nestled in lush greens – the city we see today. With endless number of diverse landmarks in a relatively small location, Hobart has ample tourist influx throughout the peak season of December, January and February. A lively food scene adds to the allure of this land of contrasts. Gold Coast Tweed River Seafood And BBQ Lunch Cruises. Whale Watching Cruises In Perth.

Watching the majestic creaturesEven though it was commercially established as an industry in 1989, whale watching in Perth is an activity that has gained a lot of popularity in the past couple of years. 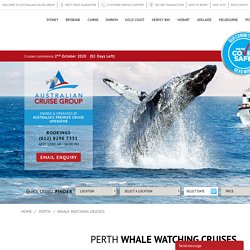 Tourists and locals both are partaking in this pastime alike, with so much it’s popularity that innumerable tour operators provide 100% guarantees for whale spotting if you choose their whale watching cruise in Perth. Increasing exponentially, the number of charter vessels that operate out of Perth’s waters provide its customers tours as exciting as they are educational. Upper Swan And Perth River Lunch Cruise. Lunch cruises are a complete package when it comes to Perth and its scenic river locales. 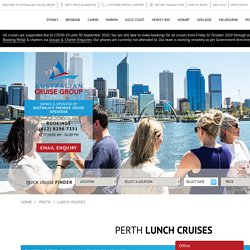 Cruise on Swan River and explore Western Australia to its best. With blue skies and photo opportunities by the bunch from vantage points, lunch cruises in Perth are sightseeing heaven! Clear blue skies, azure waters, and the birdlife & marinelife you spot, just picture all of this and you’ll be blown away! Give free rein to the photographer in you and capture fabulous pictures amid stunning backdrops that feature Perth's top attractions like Bell Tower, Kings Park, Swan Brewery, Royal Perth Yacht Club and so much more!

Don’t forget to marvel the architecture of the magnificent homes that overlook the picturesque river and happening harbour en route. All Perth river cruises boast of a lunch menu that features a variety of cuisine sourced from regional delicacies like seafood and local produce. If you’re a knowledge bug, a cruise with commentary is just what you need! Australian Cruise Group. One of the oldest cities in Australia, Brisbane styles itself as the river city. 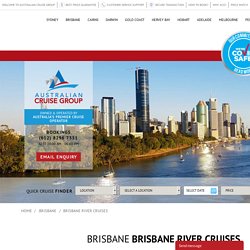 Your visit to Brisbane will be incomplete without a cruise on the pristine river that runs along with the beautifully constructed city. Melbourne Sightseeing. The trendiest city of Australia, Melbourne with its river cruises, art, cocktails, food, sport and shopping is sure to entice each and every tourist. 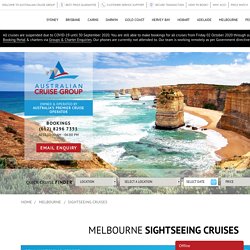 Hobart Derwent River Lunch Cruises And Island Banquets. The history of Melbourne & its tourist attractions. The Travel Vogue in Perth. Getting along with the Southern Paradise. Visit the enchanting city of Brisbane. Intriguing whale watching cruise of Sydney and the Shark Island. Whale Watching Cruises In Perth. Whale Watching Cruises In Brisbane. The capital city of the Sunshine State, Brisbane, is steadily becoming a popular Australian tourist destination. 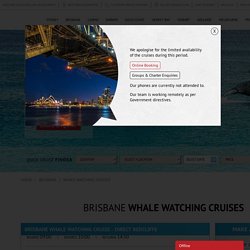 Brisbane continues to rise to the ranks of the quintessential Australian metropolitan cities rapidly, all while retaining its charm. Balmy Brisbane is a utopic subtropical paradise for the vibrant and youthful crowds that it plays host to. For the nature lovers, Australia as a whole, is a true mecca of flora and fauna, continuing to preserve and celebrate its biodiversity, acing the test of time. While there’s something for everyone in Australia’s hippest city- Brisbane whale watching cruises are a universally-loved activity across all age groups! Definitely one of the world’s greatest travel experiences featuring on almost every traveler's bucket list! Ecotourism is a sector that’s booming of late, and rightly so. Melbourne Whale Watching Cruises. Witnessing any marine mammal in the wild is thrilling, to say the least. 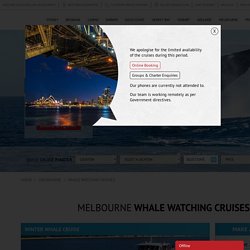 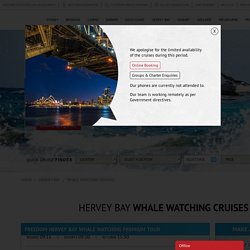 During the whale watching season in Hervey Bay between July and November, hordes of people head out on whale watching tours to catch the playful Humpback whales in action. Watching whales in their natural habitat is a pleasing thing for the mind. Watching one the largest mammals on Earth breaching and tail slapping shows the raw power of these gentle giants. The best time to go on a whale watching cruise in Hervey Bay is from end of June to the end of November. The whale song might seem baleful and sad to us, but it is in fact a means of communication, most often a mating call, by the male whales of the pod. Whales have no vocal cords and they sing by forcing air through their blow holes. There are numerous operators offering Hervey Bay whale watching tours, with most vessels departing from the Urangan Boat Harbour.

9 Best Whale Watching Cruises In Sydney. This winter, go on a whale watching cruise from Sydney Harbour for a memorable time spotting the Humpbacks. 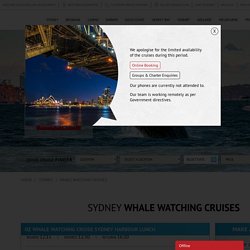 As your whale watching cruise departs from Sydney, enjoy roving views of popular attractions like Harbour Bridge, Opera House and more. Cruise out in to the open sea and catch the majestic mammals of the ocean in action on a whale watching cruise from Sydney Harbour. With a choice of nine whale watching cruises from reputed Sydney operators, take your pick and get an exclusive opportunity to spot pods of whales right from Humpbacks, Southern Right and more as they migrate to warmer climes, north of Sydney. Every September, whale watching cruise season in Sydney begins with the whales swimming out from the cold Antarctic waters northwards, past Sydney, to escape the winter and breed. Come November, the whales return again with their new born calves back to south of Sydney. If lucky, you may also catch them playfully indulging in head and tail slapping, peduncle throws or breaches! A Day at Wilsons Prom with the Gargantuan beauties. 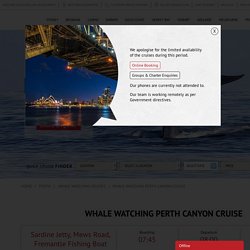 The isolated nature of the Perth coastline harbours a smorgasbord of aquatic species under the cloak of its pristine waters. A whale-watching cruise is the idyllic way to celebrate the biodiversity of the Perth Canyon Cardinal to research and data collection, the sightings of the rather elusive and endangered blue whales is one of Western Australia’s best kept secrets. The world’s largest mammal gracefully skims the Perth waters, relying massively on their copious feeding grounds for sustenance prior to their journey further North to labour and rear adorable baby blue whales.

This is an ideal time to spot the Blue Whale and in addition to these mighty whales, also spot sea lions, dolphins, sharks and migratory Antarctic seabirds. If you’re particularly lucky, you may also be able to catch a glimpse of an Orca (killer whale), the apex predator frequenting the area during feeding and migration periods. Treat your senses with the best of Gold Coast sights & activities. Have you explored the pristine city of Melbourne? Australian Cruise Group. Hobart Sightseeing & Hobart River Cruises.

Hobart Derwent River Lunch Cruises And Island Banquets. Hobart River Dinner Cruises And The Area’S Culinary Extraordinaire. Hobart is not only known for its iconic destinations and wildlife, but also for its vibrant and classic food scene and velvety wines obtained from local vineyards. This is the city where your taste buds can flit between native Australian, Indian, Continental, Chinese and Japanese cuisines. Sourced from the finest quality local and seasonal produce, the dishes served at Hobart’s restaurants and cafés are simply a class apart. Not only are the local eateries and pubs here fabulous, the exquisite cuisine and fine seafood available here are also worth the occasional splurge, should you want indulge yourself.

One of the more popular locations to enjoy picturesque views and fine dining is on board a Hobart river cruise. With exquisite dining options and a nonpareil wine list, a Hobart dinner cruise is sure to make for a memorable experience. Talking of wines, the Southern Tasmanian Wine Region is famed for many cool climate wines with historic vinery settings and remarkable flavours.