This Guy Has Designed A New Crest He Wants The USSF To Use. Made in america For many countries, the national soccer team is the most tangible and compelling representation of a nation’s identity. The symbols of those teams become iconic: England’s “three lions” crest, the blue and white stripes of the Argentine National team, the 10 on the back of the Brazil shirt, these all carry instantly recognized meaning.

Now there’s an American who wants his nation’s symbolism to reach those same heights. Omaha, Nebraska-based graphic artist Nicholas Burroughs is evidently one of the many American fans underwhelmed by the current U.S. Soccer Federation crest (used since 1995, with some color variation over time) : Although it’s an improvement on older logos, which scream either “generic American thing” or “laziest stylized 90s crap possible…” … many American fans remain unconvinced, and a large number are partial to the “Don’t Tread” logo used on Nike’s U.S. soccer merch.

The Gaffer. Total Soccer Show. SOCCER PROBLEMS. Pitch Invasion - A Blog Exploring Soccer Around The World. I don’t want to turn this blog into a running commentary on the Guardian’s coverage of American soccer. 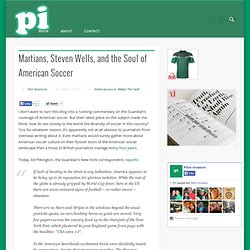 But their latest piece on the subject made me think: how do we convey to the world the diversity of soccer in this country? ‘Cos for whatever reason, it’s apparently not at all obvious to journalists from overseas writing about it. Even martians would surely gather more about American soccer culture on their flyover tours of the American soccer landscape than a troop of British journalists manage every four years. Today, Ed Pilkington, the Guardian’s New York correspondent, reports: If lack of bunting in the street is any indication, America appears to be living up to its reputation for glorious isolation. Yeah, OK, that’s not too bad of a summary on the interest level on Saturday’s game, at least from what I saw. To get back to something true that Pilkington wrote: It would be wrong to imply that this country is indifferent to the World Cup. U-S-A!: A Conversation. This Is American Soccer, US Soccer, MNT, WNT, and MLS. A Treatise: The State of American Youth Soccer « The Shin Guardian.

The US Youth Program....at a crossroads... 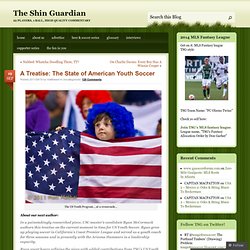 About our next author: In a painstakingly researched piece, USC master’s candidate Ryan McCormack authors this treatise on the current moment in time for US Youth Soccer. Ryan grew up playing soccer in California’s Coast Premier League and served as a youth coach for three seasons and is presently with the Arizona Hammers in a leadership capacity. Ryan spent hours refining the piece with added contributions from TSG’s US Youth expert Nick Sindt.

Thank you both. A meteorologist and a principal.... For years Sunil Gulati has chased Jurgen Klinsmann to fill the USMNT position, but through endless negotiations Klinsmann resisted. It is no secret that the US youth system has struggled to produce genuine global superstars in the sport and a team that can truly compete for the World Cup. With that in mind, let’s take a look at the top 6 issues Klinsmann needs to address with American youth soccer. Roberto Beall 1. What will change? 2. 3. 4. 5. 6. Conclusions. Pitch Invasion - A Blog Exploring Soccer Around The World. The United States U-20 team began its games this week at the Milk Cup in Northern Ireland with a 1-0 win over China, thanks to a goal from 16 year-old Omar Salgado, assisted by 18 year-old Alex Molano of Dinamo Zagreb. 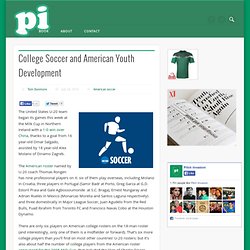 The American roster named by U-20 coach Thomas Rongen has nine professional players on it: six of them play overseas, including Molano in Croatia, three players in Portugal (Samir Badr at Porto, Greg Garza at G.D. Estoril Praia and Gale Agbossoumonde at S.C. Braga), Ernest Nungaray and Adrian Rueles in Mexico (Monarcas Morelia and Santos Laguna respectively) and three domestically in Major League Soccer, Juan Agudelo from the Red Bulls, Fuad Ibrahim from Toronto FC and Francisco Navas Cobo at the Houston Dynamo. There are only six players on American college rosters on the 18-man roster (and interestingly, only one of them is a midfielder or forward).

Rongen has been coaching the US U-20 team for almost the entire past decade. Watford have gone even further. Beau Dure: Why College Soccer Still Produces Pro Talent. College soccer is to American soccer what newspapers are to today's media. 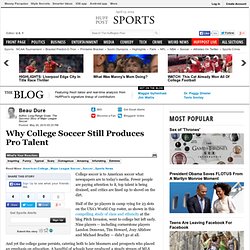 Fewer people are paying attention to it, top talent is being drained, and critics are lined up to shovel on the dirt. Half of the 30 players in camp vying for 23 slots on the USA's World Cup roster, as shown in this compelling study of class and ethnicity at the blog Pitch Invasion, went to college but left early. Nine players -- including cornerstone players Landon Donovan, Tim Howard, Jozy Altidore and Michael Bradley -- didn't go at all.

And yet the college game persists, catering both to late bloomers and prospects who placed an emphasis on education. A handful of schools have produced a steady stream of MLS players. "We'll be prepared to go to the league," Thompson says. Pitch Invasion - A Blog Exploring Soccer Around The World.