The Online Collection of Work by Ashley Ellen Goetz. Otto Neurath’s introduction of the International System of Typographic Picture Education, known as Isotype, has changed the way we look at information today. 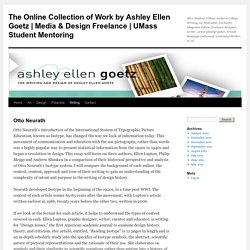 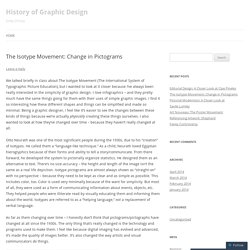 I love infographics – and they pretty much have the same things going for them with their uses of simple graphic images. I find it so interesting how these different shapes and things can be simplified and made so minimal. Being a graphic designer, I feel like it’s easier to see the changes between these kinds of things because we’re actually physically creating these things ourselves. I also wanted to look at how they’ve changed over time – because they haven’t really changed at all. Otto Neurath was one of the most significant people during the 1930s, due to his “creation” of Isotypes. As far as them changing over time – I honestly don’t think that pictograms/pictographs have changed at all since the 1930s. Here’s a look at pictograms today: Sources: Like this: The History of Symbols : Isotype. Otto Neurath Educating via Picture Language A visual program for displaying facts and quantitative information, the ISOTYPE system was born from research and theories of Otto Neurath (1882–1945), a Viennese philosopher, economist and social scientist. 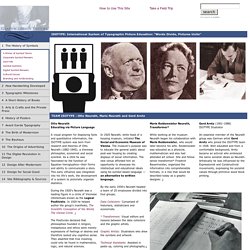 As a child he was fascinated by the function of Egyptian hieroglyphics—their forms and ability to communicate a story. This early influence was integrated into his life's work, the development of a system to pictorially organize statistics. The Online Collection of Work by Ashley Ellen Goetz. Otto Neurath's atlas 'Society and Economy': design, contents, and context. Design Legends: Otto Neurath and Gerd Antz, we thank you — Blog — D4. Posted on 30 January 2015 in Art, Design, Digital, Industry by Matthew Hall This has been in the pipeline for sometime now and as it’s a New Year I thought it would be a good time to publish this long neglected blog. 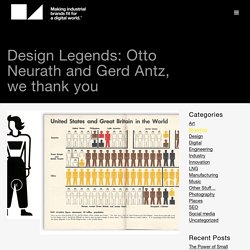 As two does not constitute a series I have finally reprised my ‘design legends’ theme. Whether skeuomorphic or flat and minimal, the use of pictograms and iconography are a prevalent visual language nowadays online, so it seems a pertinent time to talk about the two designers who revolutionised the way we look at information, statistics and data. Otto Neurath and Gerd Antz are the true pioneers of this.

This is only a brief summary of two massively influential designers, but for a retrospective of Antz’s work I highly recommend his amazing book by 010 publishers and Neurath’s ‘Global Polis’. In 1925, Neurath founded the Vienna Method of Pictorial Statistics (Wiener Methode der Bildstatistik) at the Gesellschafts- und Wirtschaftsmuseum. Gerd Arntz (1900-1988) and Isotype. In the light of growing inequality in western societies as well as on a global scale, Gerd Arntz's acute observations of interbellum Europe and the consequences of the societal divisions of that time, come as a timely reminder of the dangers such polarisation poses. 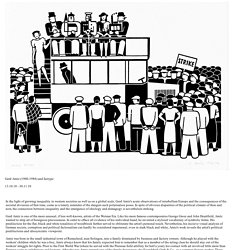 In spite of obvious disparities of the political climate of then and now, the connection between inequality and the emergence of ideology and demagogy is nevertheless striking. Gerd Arntz is one of the more unusual, if less well-known, artists of the Weimar Era. Like his more famous contemporaries George Grosz and John Heartfield, Arntz wanted to strip art of bourgeois preciousness.

In order to efface all evidence of his individual hand, he invented a stylized vocabulary of symbolic forms. His predilection for the flat, black and white tonalities of woodblock further served to obliterate the artist's personal touch. Schwabsky, Barry. The Secret of Isotype – Dieselpunks. What's it - someone created computer icons with Dieselpunk flavor? 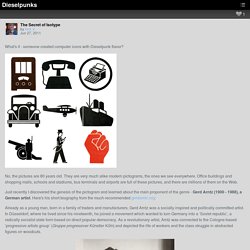 No, the pictures are 80 years old. They are very much alike modern pictograms, the ones we see everywhere. Office buildings and shopping malls, schools and stadiums, bus terminals and airports are full of these pictures, and there are millions of them on the Web. Just recently I discovered the genesis of the pictogram and learned about the main proponent of the genre - Gerd Arntz (1900 - 1988), a German artist.

Here's his short biography from the much-recommended gerdarntz.org: Already as a young man, born in a family of traders and manufacturers, Gerd Arntz was a socially inspired and politically committed artist. Gerd Arntz (at right) with Else Schuler, Tristan Rèmy, Franz Seiwert, photographed by August Sander. Published in leftist magazines, his work was noticed by Otto Neurath, a social scientist and founder of the Museum of Society and Economy (Gesellschafts- und Wirtschaftsmuseum) in Vienna, Austria. Strikes.