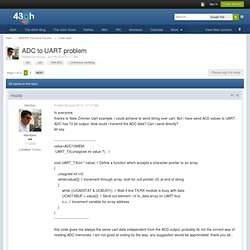 UART_TX() seems to accept character arrays (ie: strings), but you pass it an integer value. First convert the integer to a character string before passing it to UART_TX()unsigned short value=ADC10MEM;char text[6]; // Longest string is "65536", which takes 6 characters (including the null termination) itoa(value, text, 10); // convert the value to a text string in base 10 numbers UART_TX(text); Thank you, this worked well forme, just instead of itoa, i've used sprintf..i was not sure which ".h" to add to work with itoa... here is my code...

//Nate Zimmer UART example // Press button to print hello to terminal #include <msp430g2553.h> // System define for the micro that I am using #include "stdio.h" MSP430 LaunchPad: A Simple LaunchPad DAC. * NJC's Simple LaunchPad DAC * Description: This code turns the LaunchPad into a simple (slow) * function generator that outputs a sine wave at 128Hz. * For each point in a period signal, there is one * smaller PWM period. 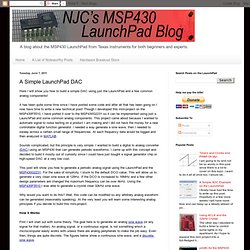 For this example there are 32 * points per period. MSP430 LaunchPad Tutorial - Part 3 - ADC. Posted by Enrico Garante on Jun 25 2013 under ARM | PIC | Tutorials | ADC | MSP430 In this new episode of our journey into MSP430 I will explain the basics of Analog to Digital Conversion on the MSP430G2231.We will write a program that will read an ADC channel and will toggle some leds based on the result of the conversion. 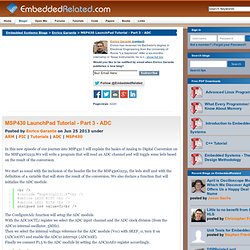 We start as usual with the inclusion of the header file for the MSP430G2231, the leds stuff and with the definition of a variable that will store the result of the conversion. We also declare a function that will initialize the ADC module. Robot Design - Analog Sensors and the MSP430 Launchpad. Analog Sensors and the MSP430 Launchpad This tutorial is an introduction to interfacing analog sensors to MSP430 series microcontrollers. 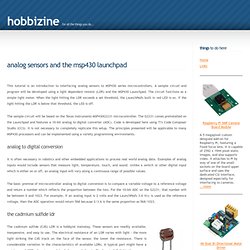 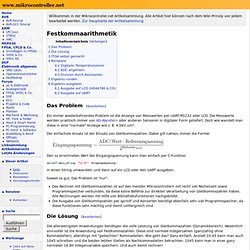 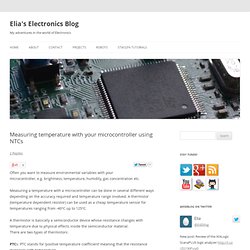 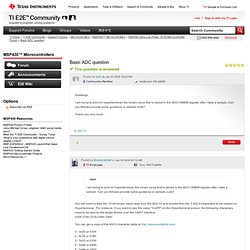 If you have such a scenario, I would suggest generating a reference voltage that is a known value through the entire input Vcc swing that the MSP430 device would be subjected to. If I knew my input voltage is going to be between 0.5V and 1.5V, would the internal 2.5V reference be a suitable choice? Coecsl.ece.illinois.edu - /ge423/datasheets/MSP430Ref_Guides/Cexamples/MSP430G2xx3 Code Examples/C/ Untitled. Using the internal temperature sensor - Code vault. TI has some sample code for the internal temperature sensor, but it does not explain how to scale the ADC reading to useful units of degrees. 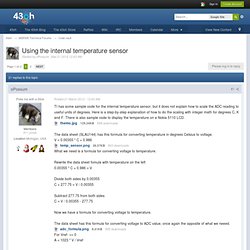 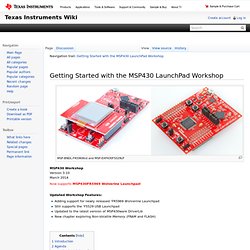 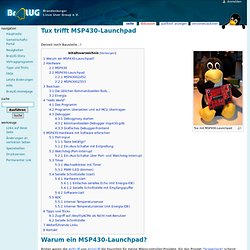 CS4101. Announcements Final Project (Demo: 1/21/2013) Course Information. Msp430g2553 simple USCI UART print. USCI and ADC With the MSP430. In my power supply I am going to want to monitor four voltages. Because other pins will be handling UART and I2C communication, I’ll want to measure the voltages connected to the inputs A5,A4,A3,A0. I could do this by hand, by changing the input channel in ADC10DTC1 from INCH_5 to the other channels I want to sample, but the MSP430 has a mechanism for sampling from multiple inputs and returning all of the values via DMA (direct memory access). The following program incorporates several changes to make this work. It includes a new array, adc_result[] which will hold the result of our sequence of ADC conversions.

I’ve filled it initially with junk data (the numbers 7 through 12) for this experiment so we’ll be able to see that the conversions have been successful. The UART code is largely unchanged, though our message length has been extended to 42 characters in order to return all of the values at once. MSP430G2553/LaunchPad UART RX example - Code vault. MSP430 Getting Started. Polling - LED controlled by Push button Polling refers to querying a device on its state, such as whether a button is pressed or not.

The upside of polling is its relative ease of implementation, the downside that it requires the CPU to, perhaps constantly, check the device. The following waits while the device is not ready; when ready the device is serviced. Hardware UART. An example showing how to use the hardware UART on the MSP430G2553 to transmit and receive characters between a terminal on the computer and the MSP430 launchpad over the USB connection. In this example sending an ‘R’ or ‘G’ will turn the red and green LEDs on and sending an ‘r’ or ‘g’ will turn them off, respectively. To send and receive characters over the serial port you can use the serial monitor that is built into Energia, click on the magnifying glass button on the top right of the window.

These are the most popular devices. MSP430 Launchpad. If you read much code written by the MSP430 community, you’ll notice a couple of differences from the code I have written. Two things in particular stand out to me. Where I have use names for constants like pin0mask, most code will use pre-defined constants, like BIT0. Anleitung zu Versuch 2 - MPTP.pdf. Illustrated guide to interfacing Maxim OneWire (1-Wire) devices DS18B20 on TI Launchpad MSP-EXP430G2.

Timers are an important feature of microcontrollers. MSP430 LaunchPad PushButton. By Aldo Briano. MSP430 Getting Started. The Texas Instruments MSP430 family of ultra-low-power microcontrollers consists of several devices featuring different sets of peripherals targeted for various applications. Tutorial: Using 1-wire devices with TI MSP430 Launchpad. Electronics enthusiast and TI MSP430 user Karve has written a detailed guide and tutorial on how to use a single Maxim 1-wire device with the inexpensive MSP430 Launchpad kit. His example is the DS18B20 temperature sensor, and apart from just dumping some notes and code at us, Karve has also explained the signals on the bus down to cycle level and annotated oscilloscope screen captures with the relevant points.