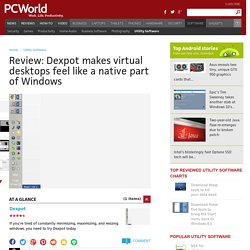 But if you're a laptop user squeaking by with a single 15-inch monitor (or perhaps something even smaller), a virtual desktop might be the next best thing to an extra monitor. Dexpot (25 Euros, which is $33 on 2/21/12; free for personal use) is a great way to get yourself one. Or five. If I had to describe Dexpot in one word, I'd pick "customizable. " I can't think of a single aspect of Dexpot you can't customize: the animation (or lack thereof) used to switch between virtual desktops, the number of desktops, hotkeys and hot corners for switching desktops using keyboard and mouse, whether or not a virtual desktop spans all your monitors are just one, and the list goes on.

When an application decides to go all-out on customization, the result is usually bloat. 12 easy PC tasks you should be doing (but aren't) Update your software Unlike fine red wine, software does not get better with age. 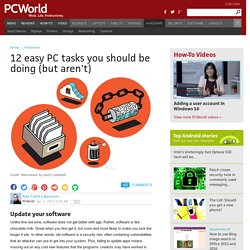 Rather, software is like chocolate milk: Great when you first get it, but more and more likely to make you sick the longer it sits. In other words, old software is a security risk, often containing vulnerabilities that an attacker can use to get into your system. Plus, failing to update apps means missing out on any cool new features that the programs’ creators may have worked in. You have an easy, free way to scan your PC to find software that needs updating, however.

Afterward, click the giant Scan button. Secunia PSI starts on boot by default and runs in the background, keeping a vigilant eye out for insecure programs. I also recommend setting Windows Update to download new patches automatically, if you haven’t done so already. Organize your files I’m not judging you for letting your data get out of hand—it happens to the best of us.

Review: DropIt organizes your Downloads folder. DropIt is a free, open-source utility that processes collections of files according to rules you define. 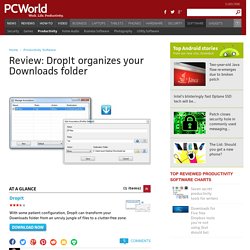 For example, you can set it loose at your Downloads folder, and telling it to sort all of the JPG and PNG files into an images subfolder, but only if they're larger than 30KB (so you don't have to save small images). It would then take all the ZIP files and put them in another folder, and delete all of the TMP files. In other words, you just configure a bunch of rules, and DropIt does the rest. You can use DropIt by dragging and dropping files onto its desktop overlay (hence the name), or have DropIt sit in the background and constantly monitor one or more folders for any changes. Once you have a solid set of rules, that latter option offers a distraction-free way to get rid of file clutter, but only after you make some tweaks to the way DropIt works. Compare and merge files and folders with WinMerge. Review: PhraseExpress 9 adds application-specific macro features. PhraseExpress, now in its ninth version, is a powerful macro and text expansion tool that automates entering commonly used phrases, in addition to several other useful functions. 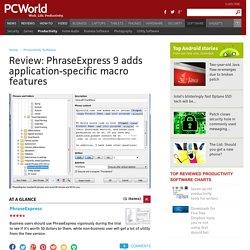 By using PhraseExpress, you can link commonly typed pieces of text, such as "You know that 'news' story is from The Onion, right? " to short keywords, such as "ONIN", and PhraseExpress will automatically produce the full phrase as soon as it detects the keyword. With the release of PhraseExpress 9, we get an assortment of new features, such as support for Windows 8 and cloud drives, that reflect the modern-day computing environment and user expectations.

PhraseExpress cost $50 for business use after a 30-day free trial; it's free for personal use. You can organize phrases into folders, grouping commonly-used concepts together, such as addresses, business greetings, favorite quotes, and boilerplate sections of text. PhraseExpress 9 includes Windows 8 support. PhraseExpress has some minor issues. Review: BoxCryptor encrypts data in the cloud.

You may be too concerned about privacy and security to leave naked files lying around on a remote server. 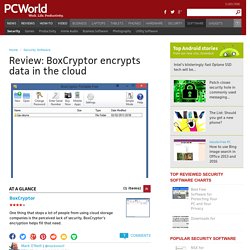 That's completely fair, but don't let it keep you from using the cloud. BoxCryptor is a free Windows desktop app that creates an encrypted folder that can be placed inside your cloud storage folder. Once you create the folder and assign a password, simply drag and drop the files you want protected into that folder. BoxCryptor instantly encrypts and protects them using the AES-256 standard. To unlock the folder and view your files, simply run BoxCryptor, navigate to the encrypted folder and enter your password. If someone attempts to open the files without the password, an error message will show. It's worth pointing out that once you set the password for the encrypted folder, it can never be retrieved or reset. WinMerge.