Under the Hood VIII

Africa Is Urbanising Without Globalising. Automation will wipe out jobs in Africa, others - W/Bank. Western Union, MoneyGram Charge Africans Twice as Much to Wire Money Home, Report Finds. Sub-Saharan African expatriates working in the U.S. and Europe pay twice as much to wire money home than their Southeast Asian or Latin American counterparts, according to a report from a British economic development organization published this week. 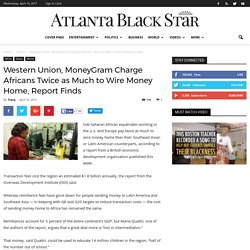 Transaction fees cost the region an estimated $1.8 billion annually, the report from the Overseas Development Institute (ODI) said. Whereas remittance fees have gone down for people sending money to Latin America and Southeast Asia — in keeping with G8 and G20 targets to reduce transaction costs — the cost of sending money home to Africa has remained the same. Remittances account for 5 percent of the entire continent’s GDP, but Maria Quattri, one of the authors of the report, argues that a great deal more is “lost in intermediation.” That money, said Quattri, could be used to educate 14 million children in the region, “half of the number out of school.” “We have no choice. Calls for better regulation Read the full story at america.aljazeera.com. 10 countries with lowest unemployment rates in Africa. 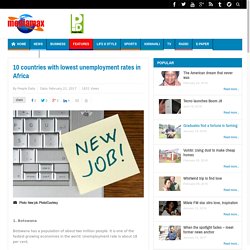 Photo/Courtesy 1. Botswana Botswana has a population of about two million people. It is one of the fastest growing economies in the world. Middle Income Grps & Sub Classes(by Percentage of Pop.) by Country. Africa in 2050, The Longterm Economic Picture by Country. Africa map of Map of Sub-Saharan Africa: Middle Income Countries(MICs) Groupings [2012 Data] by Country. Classement des villes africaines qui abritent le plus de millionnaires, selon New World Wealth et AfrAsia Bank, en 2016. Three times as many mobile phones as toilets in Africa. BULAWAYO — Though key to good health and economic wellbeing, water and sanitation remain less of a development priority in Africa, where high costs and poor policy implementation constrain getting clean water and flush toilets to millions. 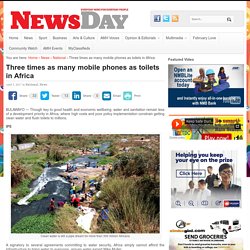 Clean water is still a pipe dream for more than 300 million Africans A signatory to several agreements committing to water security, Africa simply cannot afford the infrastructure to bring water to everyone, argues water expert Mike Muller. Sub-Saharan Africa uses less than 5% of its water resources, but making water available to all can be prohibitively expensive, Muller, of the Wits University School of Governance in South Africa and a former director general of the South African Department of Water, said. 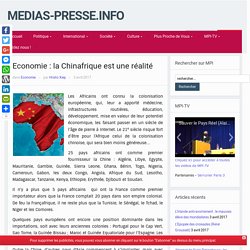 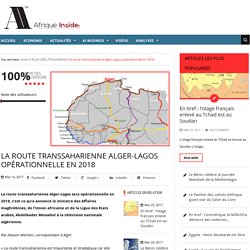 UNIDO 2016 G20 08 25. How Connectivity Is Opening Up Infrastructure Across Africa - Information Security Buzz. In the Western world utilities are often taken for granted. 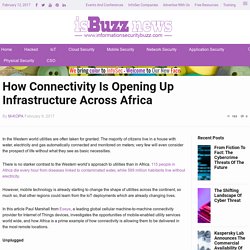 The majority of citizens live in a house with water, electricity and gas automatically connected and monitored on meters; very few will even consider the prospect of life without what they see as basic necessities. There is no starker contrast to the Western world’s approach to utilities than in Africa. 115 people in Africa die every hour from diseases linked to contaminated water, while 589 million habitants live without electricity. However, mobile technology is already starting to change the shape of utilities across the continent, so much so, that other regions could learn from the IoT deployments which are already changing lives.

Opinion: Africa Could Easily Be A Global Economic Powerhouse Within 10 Years. Senegalese factory. 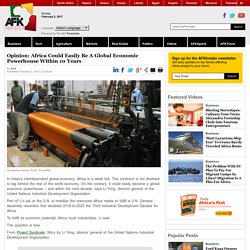 Photo: PressAfrik In today’s interdependent global economy, Africa is a weak link. The continent is not destined to lag behind the rest of the world economy. On the contrary, it could easily become a global economic powerhouse – and within the next decade, says Li Yong, director general of the United Nations Industrial Development Organization. Grandiose Plans To Finally Map Out Africa: Motion Without Movement? Why African States Are Refusing to Sign On to EU Trade Deals. Prolonged and contentious trade negotiations between the European Union and different regions of Africa have been put back into the spotlight in recent months. 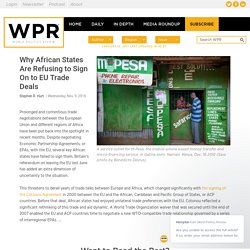 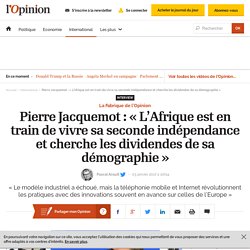 Nigeria to join Continental Free Trade Agreement. Frost & Sullivan's top tech trends for Africa in 2017 - Part 1. It's easy to be inundated by the avalanche of technology that exists and is constantly coming out, leading to a plethora of emerging trends in the market and across the globe. 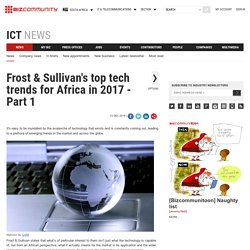 Frost & Sullivan states that what’s of particular interest to them isn’t just what the technology is capable of, but from an African perspective, what it actually means for the market in its application and the wider implications in its development and deployment. To that end, the Information & Communication Technologies (ICT) team has prepared its view on key trends that will emerge over the course of 2017. This won’t necessarily be a ‘we told you so’, but rather an overview of trends to keep front of mind when looking over the vast landscape that is evolving technologies. Africa: Things May Have to Get Worse to Get Better in Africa. They Certainly Got Worse in 2016.

The Paying Taxes 2017 report examines the ease of paying taxes in 190 economies. Africa: Unleashing Africa's Full Potential. OpinionBy Ambassador Amina Mohamed Nairobi, Kenya — Africa is the cradle of mankind and home to the youngest population in the world. We have a historic opportunity to realize the full potential of our continent in sharing the prosperity we have earned, in enhancing economic growth and in promoting and entrenching democratic ideals. The African Union Commission (AUC) must provide leadership. Taxes Rates by Country[2013 Data] by Country. The Geopolitics: Africa’s Historical Rich Oil-Curse. A sober diplomatic analysis of China, the West and others quest for African oil minerals By: Josephus Moses Gray “This might sound ridiculous”, but it is a fact that the oil’s curse can be avoided and hence, be turned into a fruitful and praiseworthy blessing; but the saddest nightmare is that dozen of oil -rich African states mismanaged their resources, thereby restricting the bulk of the home population to abject poor.

In many of Africa’s most oil-rich countries, such as Nigeria, Algeria, Angola, Egypt, Libya, Sudan, the Republic of Congo, Gabon, and Equatorial Guinea, —oil becomes a curse. The western capitalists over the centuries, beginning with the slave trade, has ruthlessly exploited the African continent, as Karl Marx described it, “the turning of Africa into a commercial warren for the hunting of black skins” was one of the chief sources of “primitive accumulation” that “signaled the rosy dawn of the era of capitalist production.” Www.worldbankblogs. "L'avenir de l'Afrique se jouera dans les villes" (Pierre-Antoine Balu, PwC)

The system was first developed and tested by Microsoft 4Afrika, through their IP Hub initiative, and KECOBO in June last year. Mauritius Has The Fastest Growing Wealth Market In Africa - Report. Port Louis, capital city of Mauritius. Photo: travelvista.net Mauritius, an Indian Ocean island in sub-Saharan Africa, is the fastest growing wealth market on the continent with 3,200 millionaires, according to a report by the New World Wealth Investment Review. The average person on the island is worth $ 21,700, which is more than second-placed South Africa, Africa’s biggest economy where the average person is worth about $10,300.

“The number of United States dollar millionaires living in Mauritius has increased by 340 percent since 2000, to reach 3,200 in 2015 and the number is expected to rise by another 130 percent in the next 10 years, reaching 7,400 by 2025, making it the fastest growing African market for millionaires over this period,” read the report. The economy is projected to grow at a rate of 3.8 percent this year, an increase from 3.7 percent in 2015, as several sectors including real estate, information and communication, financial and insurance sectors enjoying a boom. AFRIQUE : "Les grands défis de l’Afrique francophone" par Ilyes Zouari (revue Population & Avenir) African Continental Free Trade Area: Developing and Strengthening Regional Value Chains in Agricultural Commodities and Processed Food Products.

The African Union Assembly decided in 2012 during its 18th Ordinary Session to boost intra-African trade and to fast track the Continental Free Trade Area (CFTA). This CFTA is expected to boost intra-African trade expansion, stimulate sustained economic growth and foster inclusive development. The CFTA is more than a free trade agreement. It is perceived as a platform that would facilitate a process of inclusive structural transformation of African countries, contributing to meeting Africa's 2063 Vision. In this process, the CFTA would also help Africa to make progress in implementing the 2030 Agenda and Sustainable Development Goals. The present study aims to enhance knowledge among policy-makers, experts and private sector on requisite policies and measures for fostering the development and strengthening of regional supply and value chains in agricultural commodities and processed food products. Objectives and Methodology of the Report.

Ces deux navires, appartenant à la même société, selon le ministre, font partie des 14 bateaux de pêche contrôlés en infraction de la réglementation lors d'une opération conjointe du 28 août au 1er septembre dans les eaux gambiennes, sénégalaises, guinéennes et bissau-guinéennes. Africa has ‘lost $1.7 trillion’ in 50 years. Claver Gatete, Rwanda’s minister of finance and economic planning, has called on African leaders to tackle illicit financial flows, alleging that the continent had lost over $1.7 trillion to the menace in the last 50 years. According to a statement by the African Export-Import Bank (Afreximbank), Gatete made the call while speaking at the third annual customer due diligence and corporate governance forum which the bank organised in Rwanda. Gatete said Africa was losing an estimated $50 billion annually to illicit financial flows. He said this should be a source of concern to the continent, “especially as access to finance and capital was a key constraint to growth and economic development”.