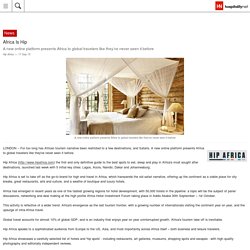 Africa’s highest hotel price point is Addis. SurveyTheodore Koumelis - 08 September 2015, 10:10 A survey of prices of international grade hotels in selected major African cities has revealed that Addis Ababa is the most expensive place for a good night’s sleep. 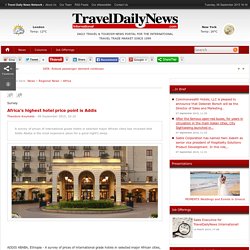 ADDIS ABABA, Ethiopia - A survey of prices of international grade hotels in selected major African cities, produced by hospitality research firm STR Global, ahead of the Africa Hotel Investment Forum (AHIF), taking place at the end of September, has revealed that Addis Ababa is the most expensive place for a good night’s sleep. The average rate in US$ (constant currency) for a hotel room in the first six months of this year in Addis Ababa was $231.78/ night. This compares with $215.75 for a room in Lagos, $144.76 in Nairobi, $122.30 in Cape Town, $105.73 in Casablanca, $103.54 in Cairo, $72.90 in Johannesburg and $70.70 in Sharm El Sheikh. 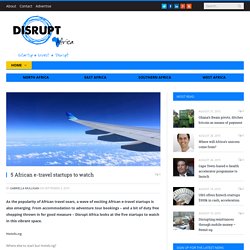 From accommodation to adventure tour bookings – and a bit of duty free shopping thrown in for good measure – Disrupt Africa looks at the five startups to watch in this vibrant space. Hotels.ng Where else to start but Hotels.ng? Founded in 2012, the Hotels.ng platform connects consumers to more than 14,000 hotels across 21 regions of Nigeria. The Nigerian startup recently made the headlines securing US$1.2 million in funding from Omidyar Network and EchoVC; which followed hot on the heels of US$250,000 seed funding raised last year from Jason Njoku’s Spark fund. The latest funding is set to fuel the startup’s expansion plans – it will help the platform cover 90 per cent of Nigerian hotels in the next three years and finance the startup’s roll-out to 50 per cent of hotels across Africa.

SleepOut. WTTC: Africa's travel & tourism industry to grow at record levels. DURBAN, South Africa - Africa is set to develop the world's fastest growing Travel & Tourism market over the next 10 years, alongside Asia-Pacific, according to the World Travel & Tourism Council (WTTC). 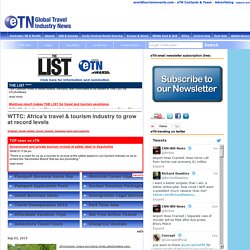 This will be the key message of David Scowsill, President & CEO of WTTC, when he delivers his keynote speech to aviation and travel industry leaders at the 21st World Route Development Forum taking place at the Durban International Conference Centre (Durban ICC) in South Africa on 19 - 22 September. According to Scowsill, the growth of Africa's Travel & Tourism industry is on course to reach 4.9% for the sector's direct contribution to GDP over the next decade, equalling the growth of the Asia-Pacific region. Joel Krahn's aerial Africa photos reveal the beauty of remote plains. 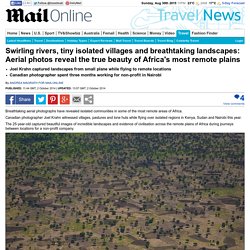 Canadian photographer Joel Krahn witnessed villages, pastures and lone huts while flying over isolated regions in Kenya, Sudan and Nairobi this year. Top 10 Most Beautiful Hotels in Africa 2015. Africa has some of the nicest five-star hotels in the world. 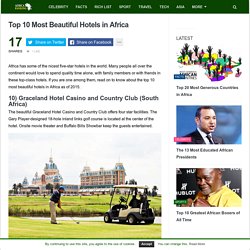 Many people all over the continent would love to spend quality time alone, with family members or with friends in these top-class hotels. If you are one among them, read on to know about the top 10 most beautiful hotels in Africa as of 2015. The beautiful Graceland Hotel Casino and Country Club offers four star facilities. The Gary Player-designed 18-hole inland links golf course is located at the center of the hotel. Onsite movie theater and Buffalo Bills Showbar keep the guests entertained. This five-star hotel is located in central Khartoum on the meeting point of the White Nile and the Blue Nile. La cuisine africaine, nouvelle tendance ? Sub Saharan growth drives African hotel surge - Africa Property News. InterContinental Hotels Group (IHG) signed a management agreement with Tsemex Hotels and Business Plc to develop Crowne Plaza Addis Ababa scheduled to open in 2016. 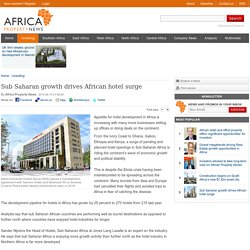 Appetite for hotel development in Africa is increasing with many more businesses setting up offices or doing deals on the continent. From the Ivory Coast to Ghana, Gabon, Ethiopia and Kenya, a surge of pending and planned hotel openings in Sub-Saharan Africa is riding the continent’s wave of economic growth and political stability. This is despite the Ebola crisis having been misinterpreted to be spreading across the continent. Many tourists from Asia and Europe had cancelled their flights and avoided trips to Africa in fear of catching the disease. The development pipeline for hotels in Africa has grown by 25 percent to 270 hotels from 215 last year.

Analysts say that sub Saharan African countries are performing well as tourist destinations as opposed to further north where countries have enjoyed hotel industries for longer. Africa’s Top50 safari parks according to thousands of travelers and experts. Africa tourismVicky Karantzavelou - 17 June 2015, 10:41 The Serengeti National Park, MalaMala Game Reserve, and Okavango Delta have been rated the best of the best in a study of more than 3,000 reviews from safari adventurists and industry experts. 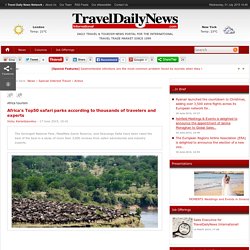 THE NETHERLANDS - SafariBookings.com, an online marketplace for African safaris, published a definitive ranking of the 50 best Safari parks of Africa based on more than 3,000 reviews. A total of 2,234 reviews were contributed by safari tourists from 63 countries. Hotel development in Africa accelerates to 50,000 rooms  - new Business Ethiopia (nBE) The 2015 Hotel Chain Development Pipeline Survey shows a surge in hotel development in Africa, with a jump in the development pipeline to 270 hotels and nearly 50,000 rooms, and with sub-Saharan Africa (SSA) exceeding North Africa by almost 70%. 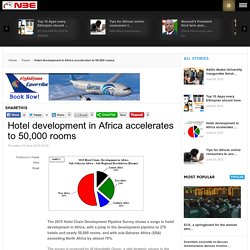 The survey is produced by W Hospitality Group, a vital strategic advisor to the Africa Hotel Investment Forum (AHIF). The data reveal a modest recovery in North Africa and increasing confidence in SSA - only two years ago the number of rooms in the North African pipeline was the same as that in sub-Saharan Africa. This year’s survey is based on contributions from 37 international hotel chains with 80 brands between them. The Sub Saharan Africa region has far more national markets than North Africa, 49 countries vs five1 and these have historically been underserved with branded hotels. It’s now time for them to catch up and they are: Cadelle Travel & Tours Limited unveils new online travel service: Explore Afrika. Explore Afrika. Investment Opportunities Across Africa's Tourism Sector - Part 1. 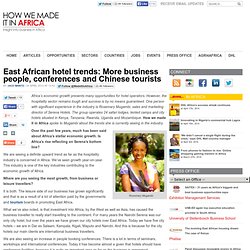 However, the hospitality sector remains tough and success is by no means guaranteed. One person with significant experience in the industry is Rosemary Mugambi, sales and marketing director of Serena Hotels. The group operates 24 safari lodges, tented camps and city hotels situated in Kenya, Tanzania, Rwanda, Uganda and Mozambique. Africa travel website offers new features.

Dubai, July 27, 2013 Southafricaholidays.com, an online travel shop focusing on Africa, has enhanced its website by offering visitors the ability to book and pay for flight, hotels, cars and travel insurance. This initiative comes from a strategy to invest in secure technological innovations for the convenience of its customers. The site offers visitors a number of airlines operating in the continent based on the lowest fare available, a range of hotels and apartments in all star categories, care hire options, and travel insurance which can be booked and purchased online at a nominal fee. Bisy Philip, chief operating officer, said, "Our new web site is more than just a redesign. The ability to book and purchase flights, hotels, cars and insurance online is a convenient and time saving tool to our customers and expands our value added offerings.” During the past year, Southafricaholidays.com has increased its distribution channel to the Travel Trade.

Seychelles ranked number 5 by tourists in worldwide hotel index - Seychelles News Agency. A tourist posts a snap of her enviable honeymoon view to Instagram (Alebos_/Instagram) Photo license Purchase photo (Seychelles News Agency) - Users of one of Asia’s leading hotel booking websites, Agoda.com, have ranked the hotels of the Seychelles archipelago among the top holiday destinations in the world. According to a press statement from Agoda.com, Seychelles came in at number five with an average score of 8.21 out of a possible 10 in the closely-contested list of the 25 destinations with the highest-rated hotels. The archipelago of 115 islands situated in the western Indian Ocean is a firm favourite with holidaymakers from Europe, Asia, the Middle East and Southern Africa, and with a variety of large hotels, guesthouses, self-catering apartments, private island resorts and spa hotels, these days there is something to suit the needs and pocket of just about every visitor to the islands.