Disney Developing African Princess Fairytale Movie ‘Sade’ Black leopard spotted in Africa for first time in 100 years. They say that black cats bring bad luck, but when Nick Pilfold heard about one lurking around central Kenya, he knew he was onto something special. 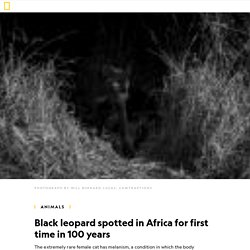 The Kenya-based biologist and his team deployed a set of camera traps throughout the bushlands of Loisaba Conservancy in early 2018. It wasn't long before he got what he was looking for: undeniable proof of a super-rare melanistic leopard. The juvenile female was spotted traveling with a larger, normally colored leopard, presumed to be her mother. (See our exclusive picture of a rare black wildcat seen in Africa.) The opposite of albinism, melanism is the result of a gene that causes a surplus of pigment in the skin or hair of an animal so that it appears black.

What Netflix’s involvement in Nigeria’s massive film industry really means - This Is Africa. Netflix Orders Its First Original African Series, ‘Queen Sono’ Kagiso Lediga and Pearl Thusi in 'Catching Feelings' / Netflix Netflix is adding yet another groundbreaking series to its lineup next year when it welcomes Queen Sono to the platform. 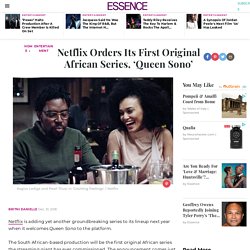 The South African-based production will be the first original African series the streaming giant has ever commissioned. The announcement comes just a week after Erik Barmack, Netflix’s VP of international originals, said the network would be partnering with more creators on the continent in 2019. According to Pearl Thusi, a veteran actor and one of the stars of the show, Queen Sono is “a thrilling story about a kicka-s female spy.” In a video, Thusi also said she “cannot wait for…every woman on this continent, and actually on this planet, to meet Queen Sono.” 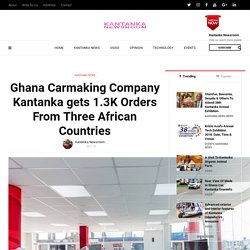 The company, a unit of Kantanka Group, had its first production models built under its own badge hit the streets in 2016. Kantanka has hence earmarked million for the project. Kwadwo Safo Jnr, CEO of Kantanka Automobile, showed off his ‘Kantanka Mensah’ at the Starrfm’s maiden program ‘Time With The CEO’ last month and revealed that the company has so far received over 1300 orders from three different African countries in West Africa. According to him, this has been the highest order since production hoping it will follow same in the subsequent. Small businesses in Africa will be on the frontline of climate change. Climate change is going to have huge consequences all over the world, especially in Africa. 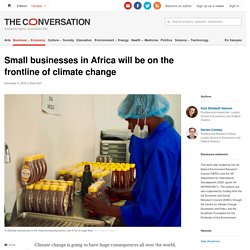 Harvests will be affected, threatening agricultural outputs. This could hurt farmers and lead to greater food insecurity. But there hasn’t been much discussion about what effects climate change will have in other areas – like in the continent’s small and medium business sector. This is a worrying oversight. Our research, conducted in Zambia and Botswana, revealed that businesses activities faced major disruptions during the 2015/2016 El Niño event. El Niño is one of the key drivers of variations in global climate conditions between different years. Reflecting this trend, the 2015/2016 El Niño was one of the strongest on record. Safaricom's M-Pesa connects with China's WeChat Pay — Quartz Africa. 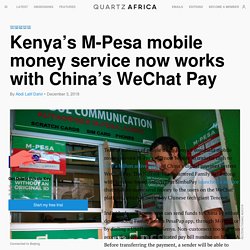 The Nairobi-headquartered Family Bank along with London-based fintech firm SimbaPay launched a service that enables users send money to the users on the WeChat platform, which is owned by Chinese tech giant Tencent. Individuals and businesses can send funds to China by either downloading Family Bank’s PesaPap app, through M-Pesa, or by dialing a USSD code in Kenya. Non-customers too will also access the service via a dedicated pay bill number on M-PESA. Before transferring the payment, a sender will be able to review the transaction and check exchange rates before its delivered in Chinese yuan.

The service is most likely to be used by Kenyan traders to pay for Chinese goods without using more expensive or slower bank options or traditional money transfer systems or remittance services. Senegal is Home to Africa's First Ever NBA Training Center. The excitement on the faces of kids at the new NBA Academy Africa in Senegal says it all that sports is indeed a tool for unity! 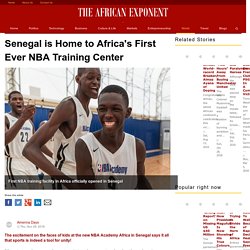 Hausa speakers can now hit "so" on Facebook. Hausa is the latest African language incorporated by Facebook into its language options. 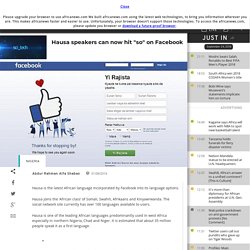 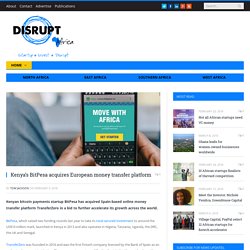 BitPesa, which raised two funding rounds last year to take its total secured investment to around the US$10 million mark, launched in Kenya in 2013 and also operates in Nigeria, Tanzania, Uganda, the DRC, the UK and Senegal. TransferZero was founded in 2016 and was the first fintech company licensed by the Bank of Spain as an authorized payment institution.

The company is a partner of Bankia, Spain’s third largest bank, and has pioneered a number of innovations in the European fintech sector. As BitPesa is one of the few global companies to have licensing and infrastructure in Africa and Europe, the partnership enables the fast-growing platform to plant deeper roots through UK and European licensing, bank accounts, and integrations. Mall for Africa expands into 11 new African countries. E-commerce platform Mall for the Africa has launched into 11 new countries across Africa in a move to meet the growing demand for goods from international online stores. 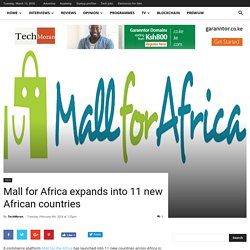 This is after the firm launched Mall for the World, for Asia and other emerging markets. The expansion in Africa is in Angola, Chad, Guinea, Botswana, Tanzania, Uganda, Malawi, Egypt, Democratic Republic of Congo, Senegal, and Sierra Leone. The company was previously only available in Kenya and Nigeria offering billions of items from more than 250 of the best US and UK retailers. “This is an exciting time for Mall for Africa as our rapid growth will afford millions of new customers the opportunity to shop from the most desired retailers,” said Chris Folayan, CEO of Mall for Africa.

“Current customers in Nigeria, Kenya, Ghana, and Rwanda love our platform which is why we are rolling out in 11 additional countries and will continue to expand our platform to meet the needs of customers worldwide.” Related. M-Pesa is now a payment option on Google games and app store. M-Pesa is the most successful mobile money payment/transfer service in the world. 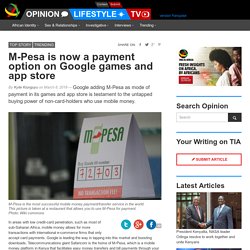 Forget Milan. African Fashion Is Taking Over the World. Neither of the co-founders of the luxury African e-commerce company OXOSI came at it from a fashion background. They started the online retailer out of a shared appreciation for safeguarding culture — African culture. Defining “African fashion” is close to impossible, but Kolade Adeyemo and Akin Adebowale (both from Nigeria) are taking on the challenge with an almost manic conviction, so that the “art and design of Afromodernism can live forever,” according to the website. The best of African architecture is sustainable and stylish. African Architecture - beyond Cape Town's Sun-drenched cluster of beachfront modernism, at least - gets scant attention in the building and design press.

But across the continent, young talent, both national and international, as well as the occasional heavy-hitting starchitect, are creating innovative, low-cost and sustainable buildings which offer lessons for architects and developers around the world. Contemporary African architecture is extremely varied: it ranges from sustainable rural developments to luxury apartments and offices; from schools and hospitals to swanky safari lodges; and from huge infrastructure projects to makeshift improvisations.

In all of these styles is a sensitivity to local traditions combined with on-the-ground ingenuity. Outside the continent, Ghanaian-British architect David Adjaye, in particular, has drawn attention to both the innovation in African architecture and its legacy of climate-smart vernacular styles. Cameroon, Ivory Coast and Ghana form AFFRUIBANA to champion interests of fruit farming. Africa map of Map of Africa: Charitable "Giving Index" by Country [2014 Data] by Country - TargetMap. TRANSPORTS AERIENS- Air Namibia devient la sixième compagnie africaine autorisée à desservir les USA – NewsAero.

The move signals a change in strategy for Shoprite under Chief Executive Pieter Engelbrecht, 47, as sovereign rating downgrades and a weak economy cloud prospects at home. 1ère édition de la conférence « Made in Africa » Onze. PERSONALITY OF THE WEEK: Samuel Gikandi, Africa’s Talking - Daily Nation. Boston Schools Use Modernized Maps That Enlarge Africa, Depict World More Accurately. Africa gets its own web address with launch of .africa. Image copyright AFP Africa now has the unique web address .africa, equivalent to the more familiar .com, following its official launch by the African Union. AU commission chairperson Nkosazana Dlamini Zuma hailed its creation as the moment when Africa "got [its] own digital identity". The AU says the .africa domain name will "bring the continent together as an internet community". Rise of Africa’s Small & Medium Size Enterprises - Robin Sanders.

Kenya's floral industry blooming into Asia. Morocco Rejoining African Union Seen Shaping Vote for New Leader - Bloomberg. African heads of state gather in the Ethiopian capital on Monday for a two-day African Union summit in which Morocco’s bid for readmission to the continental bloc will shape the election of a new chairperson. Morocco formally submitted its bid to rejoin the body last year, when King Mohammed VI set out his government’s objectives of placing the country “at the center” of Africa’s development.

The North African nation withdrew from the African Union’s predecessor, the Organisation of African Unity, three decades ago in protest at recognition of the Sahrawi Arab Democratic Republic as a member state. The status of the SADR has split the African Union, with 28 of its 54 members voting in July to expel the state -- a move that Morocco would welcome because it claims the portion of Western Sahara ruled by the SADR as its own territory. Meet the game changers in Africa's property world. Le potentiel du continent africain s'affirme de plus en plus.