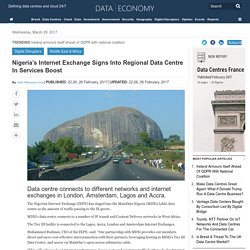 It will be so secure BELIEVE me! So secure.” It has been less than 100 days since on January 20 Donald John Trump assumed office as the 45th President of the United State of America. Nigeria to Spend U.S.$143 Billion On ICT Imports By 2019 - Nitda DG. By Zakariyya Adaramola If the trend of importation of ICT products is not stopped or at least reduced to a barest minimum, Nigeria would be spending $143.8bn on ICT imports in 2019, the Director General of the National Information Technology Development Agency [NITDA] Dr Isa Ali Ibrahim has said. 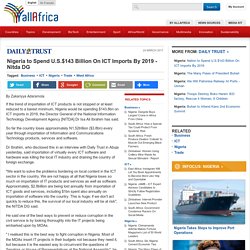 So far the country loses approximately N1.52trillion ($3.8bn) every year through importation of Information and Communications Technology products, services and software. Dr Ibrahim, who disclosed this in an interview with Daily Trust in Abuja yesterday, said importation of virtually every ICT software and hardware was killing the local IT industry and draining the country of foreign exchange. "We want to solve the problems bordering on local content in the ICT sector in the country.

We are not happy at all that Nigeria loses so much on importation of IT products and services as well as software. MTN Nigeria pays about $263m of $1.7bn fine. After several negotiations MTN Nigeria has finally paid N80 billion approximately ($263m) out of the N330 billion ($1.7 billion) fine imposed on it for failing to deactivate more than five million unregistered SIM cards. 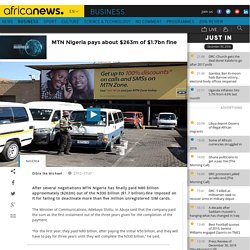 MTN Nigeria had initially been fined $3.9 billion by Nigeria’s government but the fine was later reduced by more than a half. NigComSat-1R becoming white elephant four years after –Investigation (II) - Punch Newspapers. DAYO OKETOLA, in this second part of a series, looks at the huge cost of underutilising Nigeria’s N144bn communications satellite, NigComSat-1R, over four years after it was launched into orbit Information and Communications Technology, including satellite systems and telecommunications, is critical to the growth of any nation. 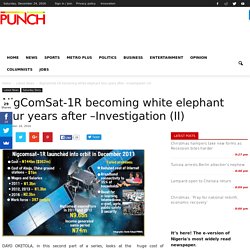 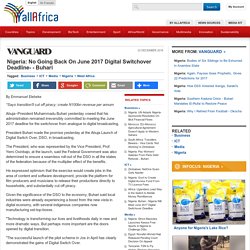 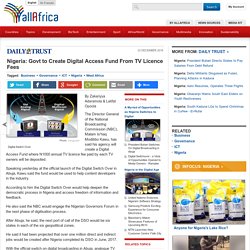 Nigeria: President Buhari Switches On Digital Broadcasting in Abuja Today. By Zakariyya Adaramola President Muhammadu Buhari will today launch the Abuja phase of the Digital Switch Over (DSO), signalling the commencement of the full roll-out of digital broadcasting across the federal capital city. 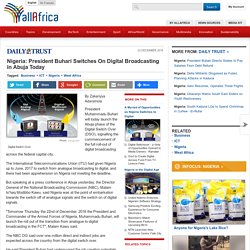 Active Users In Nigeria’s Telecoms Industry Increase To 153.5m – NCC. The active users of telecommunications services in the country stand at 153.51 million in October, the Nigerian Communications Commission (NCC) has said. 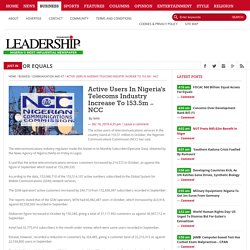 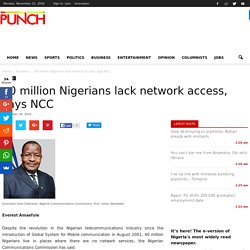 The Executive Vice-Chairman, NCC, Prof. Umar Danbatta, said this in a public lecture entitled ‘The national broadband plan as a catalyst for social and economic transformation: The NCC mandate’ organised by the Nigerian Academy of Engineering in Abuja. According to Danbatta, the 40 million Nigerians reside in 207 communities across the country where gaps in telecommunications services have been identified. The NCC boss also attributed poor quality of service in the country to neglect of fixed telecommunications services, which had put tremendous pressure on mobile wireless services. The bands also support 3G/4G/LTE backhaul and a high degree of frequency reuse due to the high directivity of their antennas. Nigeria's inactive telephone lines increase to 67 million. The Nigerian Communications Commission (NCC) says inactive lines in the country’s telecommunications industry have increased from 65,186,763 in May to 67,331,498 in June 2016. 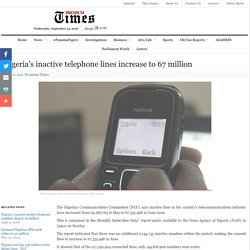 This is contained in the Monthly Subscriber Data’’ report made available to the News Agency of Nigeria (NAN) in Lagos on Sunday. The report indicated that there was an additional 2,144,735 inactive numbers within the period, making the unused lines to increase to 67,331,498 in June. It showed that of the 217,150,404 connected lines, only 149,818,906 numbers were active. Itwebafrica. Naija247news - FG commend MTN Nigeria contribution to GDP.

…seeks more collaboration on employment generation The Federal Government of Nigeria has commended MTN Nigeria on its impressive contributions to the Gross Domestic Product (GDP) since its inception in 2004. Speaking during his working visit to the Head Office of MTN Nigeria on Monday, the Honourable Minister for Communication, Barrister Adebayo Shittu said the federal government will do everything possible to encourage and develop innovative ideas from MTN Nigeria and indeed other telecommunication companies in Nigeria. “As a matter of fact, as a person, I consider MTN as first and foremost a Nigerian company. Phase3 Telecom: Connecting More Networks! Nigeria: Telecoms Sector Contributes N500 Billion to Economy, Says NCC Boss. By Adeyemi Adepetun WHILE the worth of the telecommunications industry is put at over $32 billion, it's contributions to government coffers (Consolidated Revenue Account) in the last 13 years of Nigeria's telecoms revolution is estimated at about N500 billion.

Besides, the sector was said to have created about 2.5 million jobs directly and indirectly and contributed 9.5 per cent to the countries Gross Domestic Product as at December 2014. The sector can also boast of over 150 million subscribers; 98 million Internet users and 108 per cent teledensity mark. Executive Vice Chairman of the Nigerian Communications Commission (NCC) making these disclosures yesterday in Lagos, Prof. Umar Danbatta at his maiden international press conference, said the revenue to government coffers were earnings from spectrum sales, taxes and other telecommunications earning activities between 2001 and 2014. Danbatta also unveiled his eight-point agenda for the industry. Nigeria’s Telecoms Industry in 2016: Franchise centers the way forward. Over the last decade, Nigeria’s telecommunication industry has experienced unrivalled growth and unprecedented development.

Mobile data, once too expensive to provide or consume, has become commonplace, giving rise to a rapid increase in smartphone usage and a resulting rise in new-generation economic sub-sectors like e-commerce and digital media marketing. These have all colluded to foster a much more robust Nigerian economy, buoyed by easier, cheaper and faster communication and information dissemination. MTN is doubling down on broadband in Nigeria even as its record fine looms. Penny Sparrow, the woman whose name has become synonymous with racism, was born in 1947, on the eve of apartheid. Her entire life and that of her peers, one imagines, was spent in exclusive ‘whites only’ spaces where blacks were not allowed in, except, perhaps, as cheap labour to clean after and take care of their homes and to rear their children. This is Penny Sparrow’s South Africa and it is this same exclusive environment in the post-1994 moment, whether in economic terms or social and spatial arrangements that continues to inform much of the views of “white South Africa”.

“White South Africa” is a useful construct for bigots who want to perpetuate learned forms of institutional racism and who feel entitled to exclusive access to certain privileges (such as a public Durban beach), also, by extension, a right to open racial bigotry as we have seen on social media from the likes of Sparrow, Justine Van Vuuren, Chris Hart of Standard Bank and Nicole de Klerk. Nigeria: NCC Ready to Force MTN to Pay Fine As Deadline Expires. Nigeria said it was expecting telecoms giant MTN to meet a deadline for paying a record $3.9 billion fine which expires Thursday, despite the South African operator challenging the penalty in court.

The Nigerian Communications Commission (NCC), the country's telecoms regulator, had in October fined the firm for missing a deadline to disconnect 5.1 million unregistered SIM cards, citing security concerns in a country plagued by frequent kidnappings and an extremist Islamist insurgency Boko Haram. It imposed a whopping $5.2 billion fine, later reduced to $3.9 billion (3.6 billion euros) following an appeal by MTN.

Nigeria to provide satellite technology to Belarus. MTN invests over $15bn in Nigerian economy - official. Huawei signs ICT agreement with Nigeria - Business. Nigeria: Govt to issue ICT policy blueprint in Jan 2016. Shittu had given a reassurance that, as the new minister, he is passionate about development and that he aims to generate a lot of employment in the economy. (Image Source: afritramp.fr) According to a report via TelecomPaper, Minister of Communications – Adebayo Shittu – has said that a new blueprint for the Information and Communication Technology (ICT) industry will be published in January, 2016.

MTN sues NCC over N780 billion fine. Nigeria: Wood Projects Fresh U.S.$25 Billion Investments for Nigeria's Fibre Coverage. 250m fake phones sold in Nigeria yearly –NCC. From Walter Ukaegbu, Abuja. ‘Secondary market for spectrum‘ll spur development’ - The Nation Nigeria. In the telecoms and broadcast industries, spectrums are considered scarce and essential intangible commodities. For quality and ubiquitous services delivery, they are central. But some people are hoarding these commodities. In this interview with LUCAS AJANAKU, Association of Telecoms Companies of Nigeria (ATCON) President Lanre Ajayi says the government should create a secondary market for buying and selling spectrums to fast-track service rollout and enhance growth. Besides, he urges telcos to inform their customers before deactivating their SIMs.