Africa cancels a Belt and Road Initiative project for the first time. NEW DELHI: Sierra Leone, one of the world’s developing countries, has scrapped plans to build a China-funded $318-million airport outside the capital, Freetown. 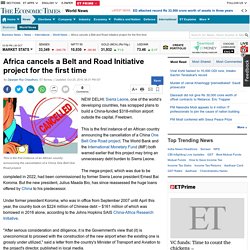 This is the first instance of an African country announcing the cancellation of a China One Belt One Road project. The World Bank and the International Monetary Fund (IMF) both warned earlier that this project may bring an unnecessary debt burden to Sierra Leone. The mega-project, which was due to be completed in 2022, had been commissioned by former Sierra Leone president Ernest Bai Koroma. But the new president, Julius Maada Bio, has since reassessed the huge loans offered by China to his predecessor. Under former president Koroma, who was in office from September 2007 until April this year, the country took on $224 million of Chinese debt -- $161 million of which was borrowed in 2016 alone, according to the Johns Hopkins SAIS China-Africa Research Initiative. Sierra Leonean govt cancels $318M Mamamah airport contract with China.

Sierra-Leone President Sacks Ambassadors, Workers Above 60 Years - The Trent. Julius Maada Bio, the president of Sierra-Leone, has sacked all political appointees at the country’s foreign missions including ambassadors and information attachés. 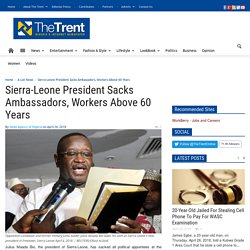 He has also retired all workers in the public service who have attained the age of 60, except those under special employment approved by parliament. The sackings were contained in an executive order President Maada Bio issued on Wednesday, April 25, 2018, in which he announced a wide range of measures to reduce financial waste. He also embargoed recruitments in the public service. Here are the measures announced on Wednesday: *With immediate effect, purchase of vehicles by all Ministries, Departments, and Agencies, MDAs, and public corporations has been banned until a new Fleet Management Policy is put in place. *Payment for fuel, telephone and internet services to public servants in Ministries, Departments, and Agencies for their residences are suspended with immediate effect pending a new benefit policy.

Sierra Leone: 'Sierra Leone Population Is Now Over Seven Million' By Regina Pratt Statistics Sierra Leone yesterday released the provisional census result for the 2015 Population and Housing Census, which revealed that the population of Sierra Leone has increased from 4 million in 2004 to 7,075,641, with 49.1% men and 50.9% women. 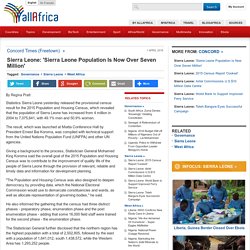 The result, which was launched at Miatta Conference Hall by President Ernest Bai Koroma, was compiled with technical support from the United Nations Population Fund (UNFPA) and other UN agencies. Sierra Leone Seeks Billions in Power Investments - Breakbulk. The government of Sierra Leone is seeking up to US$3.5 billion in private investment to generate about 1 gigawatt of power by 2017. 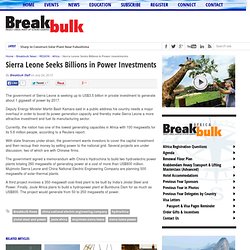 Deputy Energy Minister Martin Bash Kamara said in a public address his country needs a major overhaul in order to boost its power generation capacity and thereby make Sierra Leone a more attractive investment and fuel its manufacturing sector. Currently, the nation has one of the lowest generating capacities in Africa with 100 megawatts for its 5.6 million people, according to a Reuters report. With state finances under strain, the government wants investors to cover the capital investment and then recoup their money by selling power to the national grid. Several projects are under discussion, two of which are with Chinese firms.

The government signed a memorandum with China’s Hydrochina to build two hydroelectric power plants totaling 260 megawatts of generating power at a cost of more than US$800 million. Sierra Leone’s wealthy re-emerge in a country hit hard by Ebola. ©Bjorn Kietzmann/Demotix/Corbis Life has returned to normal in the markets of Freetown after Sierra Leone was officially declared Ebola free The day Sierra Leone was declared Ebola-free, late last year, the seaside capital Freetown partied until dawn. 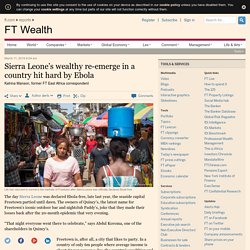 The owners of Quincy’s, the latest name for Freetown’s iconic outdoor bar and nightclub Paddy’s, joke that they made their losses back after the 20-month epidemic that very evening. “That night everyone went there to celebrate,” says Abdul Koroma, one of the shareholders in Quincy’s. Freetown is, after all, a city that likes to party. “You don’t have exclusive places in Sierra Leone; there’s no door policy as such and it’s not a complicated formula — there is a little VIP room but Paddy’s is a mixed bag,” Koroma says of the nightclub, which represents the ultimate in good-time free-for-alls. It is a scene unthinkable just a few months ago.

Ebola wiping out Sierra Leone’s post-war gains: Study. Ebola-hit Sierra Leone faces social and economic disaster as gains made since the country’s ruinous civil war are wiped out by the epidemic, according to a major study released today. 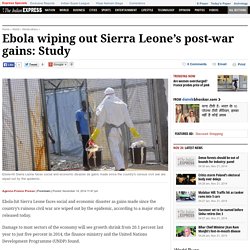 Damage to most sectors of the economy will see growth shrink from 20.1 percent last year to just five percent in 2014, the finance ministry and the United Nations Development Programme (UNDP) found. “While priority number one must be to stop the spread of Ebola, protecting Sierra Leone from the wider damage caused by this disease is crucial,” said David McLachlan-Karr, the UN chief in Sierra Leone. “This report is a sobering warning that shows us that Sierra Leone faces a dramatic GDP loss, significant inflation, and a severe drop in trade and production nationwide across many sectors.” Sierra Leone Group Continues Bitcoin Drive to Fight Ebola. A group of entrepreneurs promoting bitcoin in western Africa has reminded the world of the dire situation it faces as its daily fight to stop the spread of Ebola continues. 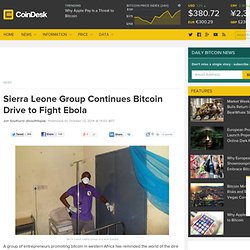 The Sierra Leone Liberty Group (SLLG), initially formed to promote free enterprise and libertarian ideals as the path to prosperity in the country, has continued to promote its message despite the frequent need to jump in and assist members’ fellow countrymen more directly. According to leader Mustapha Cole, the group has worked with Ministry of Health vehicles alongside local nurses and has used funds from bitcoin donations to deliver dwindling medical supplies such as disinfectant, goggles and rubber gloves and also to help educate local populations on how to avoid Ebola infection. Cole said: “In Sierra Leone we are suffering from the Ebola outbreak. Every day there is death in my community as people die and food is scarce as the people are quarantined in their homes. Ept_sierraleone.pdf. Sierra Leone - Africa's New Investment Destination.