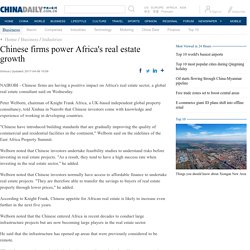 Peter Welborn, chairman of Knight Frank Africa, a UK-based independent global property consultancy, told Xinhua in Nairobi that Chinese investors come with knowledge and experience of working in developing countries. "Chinese have introduced building standards that are gradually improving the quality of commercial and residential facilities in the continent," Welborn said on the sidelines of the East Africa Property Summit. Welborn noted that Chinese investors undertake feasibility studies to understand risks before investing in real estate projects. "As a result, they tend to have a high success rate when investing in the real estate sector," he added. Welborn noted that Chinese investors normally have access to affordable finance to undertake real estate projects. China’s CSCEC to build tallest tower in Africa. The biggest builder in the world by turnover, state-owned China State Construction Engineering Corporation (CSCEC), has been awarded the contract to build the tallest tower in Africa, in Nairobi, Kenya. 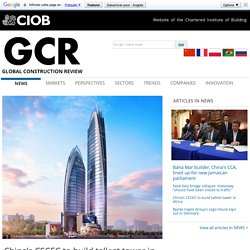 Reflecting hopes that Kenya will soon be a major oil exporter, a named investor is oil marketing firm Hass Petroleum Group, whose $195m (Sh20 billion) Hass Towers scheme will consist of two towers: a 45-storey Hilton hotel, and a record-breaking 67-storey tower with Grade A office, retail and leisure space, Capital Business reports. Chinese giant to build the tallest towers in strategic Djibouti. Construction giant China Civil Engineering Construction Corporation (CCECC) has laid the foundation stone for a $70m, 23-storey twin-tower development in Djibouti, set to be the tallest structures in the Horn of Africa. 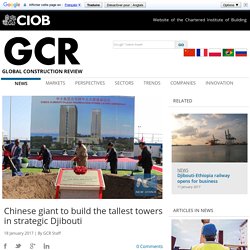 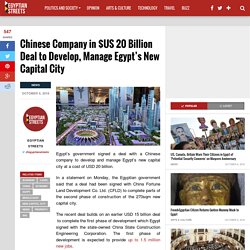 In a statement on Monday, the Egyptian government said that a deal had been signed with China Fortune Land Development Co. Ltd. (CFLD) to complete parts of the second phase of construction of the 270sqm new capital city. The recent deal builds on an earlier USD 15 billion deal to complete the first phase of development which Egypt signed with the state-owned China State Construction Engineering Corporation. According to government officials, the project is being carried out by an Egyptian-Chinese alliance that includes the Arab Contractors, the Petroleum Projects and Technical Consultations Company, and the China State Construction Engineering Corporation. 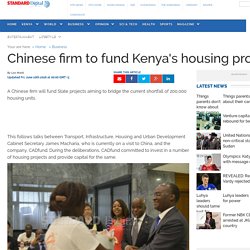 This follows talks between Transport, Infrastructure, Housing and Urban Development Cabinet Secretary James Macharia, who is currently on a visit to China, and the company, CADfund. Angola: Chinese Company Builds, Helps Manage New Residential District in Luanda. Luanda — Angola's capital city of Luanda, was originally planned to accomodate 350,000 people but now was home to 7.6 million people, the city became one of the most crowded capitals in the world and its downtown areas seemed to have standing room only. 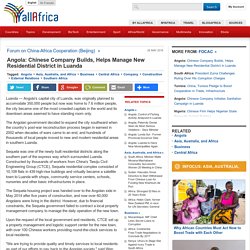 The Angolan government decided to expand the city southward when the country's post-war reconstruction process began in earnest in 2002 when decades of wars came to an end, and hundreds of thousands of local people moved to new and modern residential areas in southern Luanda. Sequela was one of the newly built residential districts along the southern part of the express way which surrounded Luanda. Constructed by thousands of workers from China's Tiesiju Civil Engineering Group (CTCE), Sequela residential complex consisted of 10,108 flats in 439 high-rise buildings and virtually became a satellite town to Luanda with shops, community service centers, schools, nurseries and other basic infrustructures in place. China’s interest for Africa are real and concrete. Rhetoric that attributes slowdown in African economy to China is unreasonable. 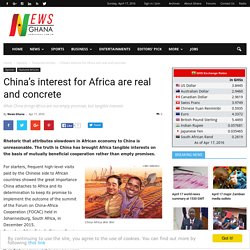 The truth is China has brought Africa tangible interests on the basis of mutually beneficial cooperation rather than empty promises. For starters, frequent high-level visits paid by the Chinese side to African countries showed the great importance China attaches to Africa and its determination to keep its promise to implement the outcome of the summit of the Forum on China-Africa Cooperation (FOCAC) held in Johannesburg, South Africa, in December 2015.

From Jan. 30 to Feb. 6, Chinese Foreign Minister Wang Yi paid a visit to Malawi, Mauritius, Mozambique and Namibia. For 26 consecutive years, Africa has been the destination of Chinese foreign ministers in their first overseas visit in any new year. China’s top legislator Zhang Dejiang paid a 10-day visit to Zambia, Rwanda and Kenya in March. Kenya: Chinese luxury resort developer not targeting buyers from China. The Sultan Palace Beach Retreat under construction Real estate is a thriving industry in Kenya, attracting millions of dollars in investments from individuals and institutions. 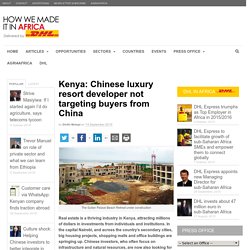 In the capital Nairobi, and across the country’s secondary cities, big housing projects, shopping malls and office buildings are springing up. Chinese investors, who often focus on infrastructure and natural resources, are now also looking for a piece of Kenya’s property boom. North of the port city of Mombasa, Chinese real estate firm Sultan Palace Development is putting up a $47.5m luxury resort. The 43-acre beach-front project comprises villas, condos, beach houses, a waterpark and a five-star hotel to be managed by a leading hotel brand.