What Will It Take To Close The Funding Gap For Black Female Founders? If you’ve heard the statistics once, you’ve probably heard them a thousand times: Of the nearly $100 billion in venture funding that goes to entrepreneurs in America, less than 3% goes to female founders and just 0.2% goes to black female founders. 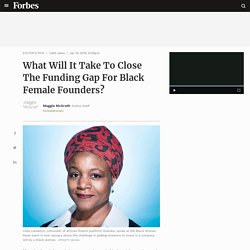 There’s a growing consensus that venture capital’s race problem needs to be fixed. What’s less clear is precisely how to start closing the massive gulf. And at the inaugural Black Women Raise conference in Manhattan on Friday, a gathering of some 80 black female founders, a series of candid conversations laid bare the frustrations around the lack of an obvious path forward. In several raw moments of interchange, however, some answers started to emerge. Investors "could ask different questions,” Charles Hudson, founder and managing partner of Precursor Ventures, said during a panel conversation with BBG’s Susan Lyne, First Round Capital’s Hayley Barna, and Female Founder’s Fund Sutian Dong. “Vet investors up front. Two Sisters Created the Only Luxury Chocolate Brand Made in Africa. Africanews poll: Trend of young African female ministers welcomed. Africanews picked a political trend of young women taking ministerial posts across Africa as our poll topic last week. 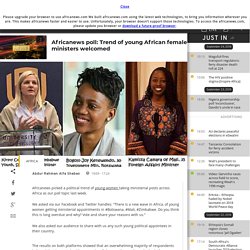 We asked via our Facebook and Twitter handles: “There is a new wave in Africa, of young women getting ministerial appointments in #Botswana, #Mali, #Zimbabwe. Do you think this is long overdue and why? Vote and share your reasons with us.” We also asked our audience to share with us any such young political appointees in their country. The results on both platforms showed that an overwhelming majority of respondents believed that it was indeed long overdue. Ethiopian Airlines makes history with all-female crew trip within Africa. Africa map of Map of Africa: Gender Equality Index by Country [2015 Data] by Country - TargetMap. 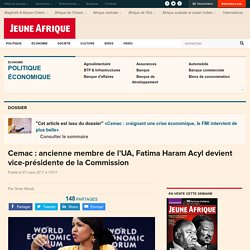 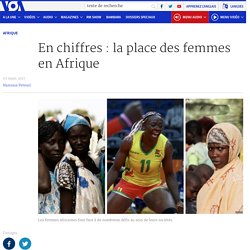 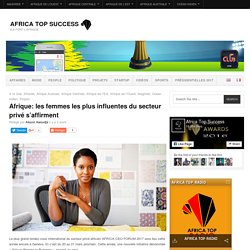 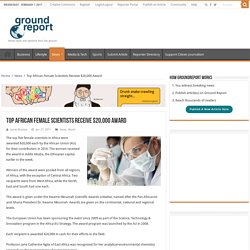 The women received the award in Addis Ababa, the Ethiopian capital, earlier in the week. Winners of the award were pooled from all regions of Africa, with the exception of Central Africa. Two recipients were from West Africa, while the North, East and South had one each. Eminent female African scientists recognised by the African Union with the support of the EU. At least 18 women running for AU Commission top jobs. Nigeria′s Amina Mohammed - UN′s most powerful woman. Nigerian environment minister Amina Mohammed brings a wealth of development experience to her new role as Deputy Secretary-General at the United Nations, where she will serve under António Guterres, the incoming Secretary-General. 55-year-old Mohammed is no stranger to the UN. 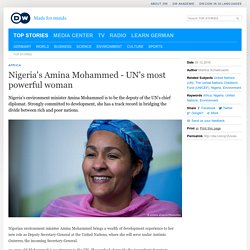 She worked alongside the incumbent Secretary-General Ban Ki-moon as a special advisor in efforts to persuade the international community to wipe out poverty and tackle climate change, while also serving three Nigerian administrations in the development field. In her new job, Mohammed, a mother of six, will assist the Secretary-General in managing operations at the Secretariat, representing him at conferences and official functions. The Secretary-General plays a unique and critical role in international relations. In her role as deputy, Mohammed will carry out these duties and undertake the essential task of engaging with and mediating between conflicting parties. 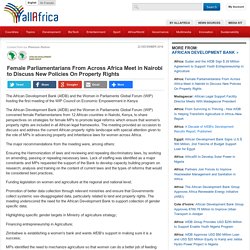 The meeting provided an occasion to discuss and address the current African property rights landscape with special attention given to the role of MPs in advancing property and inheritance laws for women across Africa. Girl Power in West Africa Comes From Tradition—and Wrestling by Lindsey Weedston. In Senegal, a nation on the Northwest coast of Africa, wrestling is more than a sport—it’s a tradition. 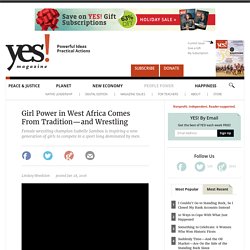 Wrestling, or laamb as it’s called here, is an important aspect of Senegalese culture that combines strength and skill with mysticism and community gathering. Nearly everyone, both men and women, participates in laamb from a young age. In episode four of A Woman’s Place, filmmakers Kassidy Brown and Allison Rapson explore how Senegalese women are forging a place for themselves within a national tradition that’s become increasingly male-dominated. A New Off-Grid Energy Challenge Aimed at African Women. Study Finds Women MPs Harassed, not in Rwanda.

Rwandan female MPs(including the Speaker-3rd left) celebrate victory after EALA tournments last year Women MPs participate in plenary sessions as equally as their male counterparts but none had ever revealed what happens to them behind the scene. 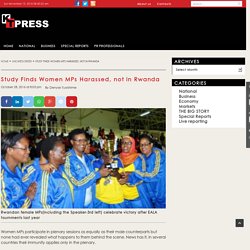 News has it, in several countries their immunity applies only in the plenary. The international Organization of Parliaments –IPU in a study released yesterday, has found that violence, harassment and sexism against women in parliament are major challenges to democracy and gender equality in countries around the world. Through deep interviews with 55 female MPs from 39 countries that were kept a secret in the study, respondents said they face psychological violence including abuse of all sorts, sexual and physical violence very frequently. Death, rape, beatings as well as kidnap are some specific threats the female legislators say they face. Give women loans— Okonjo-Iweala. •Says financial inclusion for women critical to economic growth By Nkiruka Nnorom Former Minister of Finance and co-chair, Women’s World Banking, Africa Advisory Council, Dr. Africa: Festival Spotlights African Women Filmmakers.

Photo: Mark Olalde/IPS Nefertite Nguvu, director of the HER Africa Film Festival’s featured film, In the Morning. By Mark Olalde Johannesburg — At the Bioscope Independent Cinema in Johannesburg's trendy, gentrifying Maboneng neighbourhood last week, the two-day HER Africa Film Festival showcased films and web series from across the globe, including Mali, the U.S., Burkina Faso and elsewhere.

These four heavyweights will constitute the panel on day one of the fourth Angel Fair Africa from 10-11 November 2016. A total of 20 startups and scaleups will have the opportunity to pitch in front of eager investors. These startups have been selected from various parts of the continent, such as Kenya, Uganda, Tanzania, South Africa, Ethiopia, Mozambique, Rwanda and Nigeria, via Angel Fair Africa’s partnership network.

Tutsi women in Rwanda Britannica.com Sub-Saharan Africa is losing $95 billion annually due to fewer jobs given to women on the continent, a United Nations (UN) report showed, adding that the continent was home to seven of the most unequal countries in the world. African women have been overshadowed by men in economic production and hold only 66 percent of all jobs in non-agricultural informal sector, according to Africa Human Development Report 2016, which was released during the two-day Tokyo International Conference on African Development (TICAD) summit that ended on Sunday in Nairobi, Kenya. The report recommended that African countries increase women participation in their labor markets if they wanted to eradicate poverty and hunger and boost the wellbeing of people living on the continent.

This means Africa loses six percent of the continent’s Gross Domestic Product (GDP) and it was highest in 2014, when the region lost $105 billion. ITC's SheTrades Initiative scores African banks support. The International Trade Centre (ITC)’s SheTrades Initiative has received the support of African financial institutions, including Access Bank and Fidelity Bank in Nigeria and Barclays in Kenya. The SheTrades Initiative was launched in September 2015, and aims to connect 1 million women to the international markets by 2020 as well as achieving global actions to empower women to trade. The ITC has so far recruited partners ranging from financial institutions to research and multilateral organisations committing to getting 800,000 female entrepreneurs to market by 2020. “We work with a diverse range of partners.

What counts for us is that they will be ready to put their commitment in writing and be ready for us to check and monitor that they follow through with it,” ITC executive director Arancha González tells GTR. Barclays and ITC launch partnership to connect 10,000 women entrepreneurs to export markets. (Nairobi) - Barclays Bank of Kenya and the International Trade Centre (ITC) have today launched a partnership that seeks to equip 10,000 local women entrepreneurs with new skills and connect them to international trade opportunities by 2020.

The SheTrades initiative was launched by ITC in 2015 with the objective of connecting one million women entrepreneurs from around the world to global markets in the next five years. In Kenya, the initiative will operate under the banner SheTradesKE and will be implemented in cooperation with Barclays Kenya and various other partners. Facebook partnered with She Leads Africa in support of female African entrepreneurs. Initiative to encourage women across the continent to start their own businesses and help drive prosperity for their countries. Facebook is supporting and sponsoring She Leads Africa (SheLeadsAfrica.org), an African enterprise and women’s business-focused movement, to help ensure female entrepreneurs and professionals across the world unlock their full potential.

She Leads Africa’s (www.SheLeadsAfrica.org) hugely successful bootcamp programme, SheHive (SheLeadsAfrica.org/SheHive-London), was held in London from August 18th-21st 2016. The four-day event took place at Facebook HQ in London and featured some of the city’s leading African and diaspora entrepreneurs and business women, who shared insight and advice, as well as lead workshops on building business skills for the future. She Leads Africa has built a global community of more than 100,000 members across Africa and the diaspora in just two years. Where do African women have more power? Surprise — in countries emerging from war - Pan African Visions.

Emerging African Women Entrepreneurs. Investing in the future of African women farmers. At the age of 12, Malawi-born Mphangera Kamanga knew she wanted to go to university to study agriculture so she could help smallholder farmers to improve their yields. “When I thought about farming, I realised that there was a need for labour-saving technologies and improved policies around access to land and resources to assist women in particular to increase their yields,” she said.