Ethiopia plays host to hub of Africa Addis Fashion show. Ethiopian sculptor creates unique designs from scrap metal. Ethiopia: Film Industry Booming in Quantity, Not in Quality - Study. By Fanuel Lakew Ethiopian film makers have been invited to take part in various international film festivals but they fail to do so as they could not meet the international criteria Study reveals that Ethiopian film industry is booming in terms of number not quality. 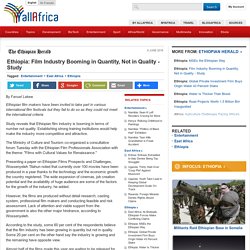 Establishing strong training institutions would help make the industry more competitive and attractive. The Ministry of Culture and Tourism co-organized a consultative forum Tuesday with the Ethiopian Film Professionals Association with the theme: "Films with Cultural Values for Renaissance. " Presenting a paper on Ethiopian Films Prospects and Challenges, Wossenyeleh Tilahun noted that currently over 100 movies have been produced in a year thanks to the technology and the economic growth the country registered. 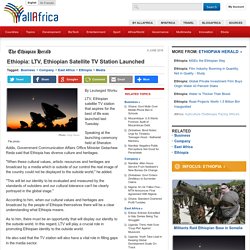 Speaking at the launching ceremony held at Sheraton Addis, Government Communication Affairs Office Minister Getachew Reda said that Ethiopia has diverse culture and heritages. "When these cultural values, artistic resources and heritages are broadcast by a media which is outside of our control the real image of the country could not be displayed to the outside world," he added. "This will let our identity to be evaluated and measured by the standards of outsiders and our cultural tolerance can't be clearly portrayed in the global stage.

" According to him, when our cultural values and heritages are broadcast by the people of Ethiopia themselves there will be a clear understanding what Ethiopia means. As to him, there must be an opportunity that will display our identity to the outside world. In this regard, the initiative taken by Dr. Dr. Ethiopia: Moby Group Launches Free-to-Air Satellite Station Kana TV in JV With Local Partners.

London — Dubai-based Moby Group is launching a new satellite entertainment channel in Ethiopia in a JV with local partners. 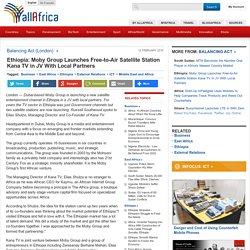 For years the TV sector in Ethiopia was just Government channels but two satellite stations are now launching. Russell Southwood spoke to Elias Shulze, Managing Director and Co-Founder of Kana TV. Headquartered in Dubai, Moby Group is a media and entertainment company with a focus on emerging and frontier markets extending from Central Asia to the Middle East and beyond. The group currently operates 16 businesses in six countries in broadcasting, production, publishing, music, and strategic communications. The group was founded in 2003 by the Mohseni family as a privately held company and interestingly also has 21st Century Fox as a strategic minority shareholder.

According to Shulze, the idea for the station came up two years when of its co-founders was thinking about the market potential of Ethiopia:"I visited Ethiopia and fell in love with it. Under construction: The communications industry in Ethiopia. Mon, 25 Jan 2016 10:28 Graham Cruikshanks As a frequent visitor to many African cities, I am often tempted to use the descriptor ‘under construction’. 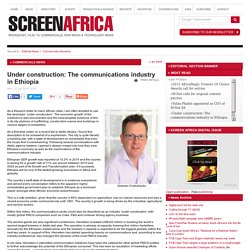 The economic growth of the continent is well documented and the most tangible evidence of this is its city skylines of scaffolding, construction cranes and buildings in various stages of completion. As a first-time visitor on a recent trip to Addis Ababa, I found this description to be somewhat of a euphemism. The city is quite literally a building site, with a state of development so remarkable that even the locals find it overwhelming. Ethiopian GDP growth was reported at 10.3% in 2014 and the country is aiming for a growth rate of 11% per annum between 2015 and 2020 as part of its Growth and Transformation plan. This is a lofty ambition, given that the country is 85% dependent on agriculture, has no natural resources and was a closed economy under communist rule until 1991. The alcohol giants are also significant contributors. Made In Africa: Ethiopia's Film Industry Set For Take Off. 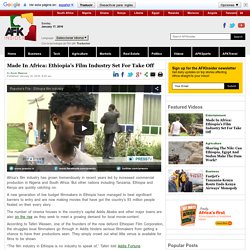 But other nations including Tanzania, Ethiopia and Kenya are quickly catching on. A new generation of low budget filmmakers in Ethiopia have managed to beat significant barriers to entry and are now making movies that have got the country’s 93 million people fixated on their every story. The number of cinema houses in the country’s capital Addis Ababa and other major towns are also on the rise as they seek to meet a growing demand for local movie-content. According to Taferi Wessen, one of the founders of the now defunct Ethiopian Film Corporation, the struggles local filmmakers go through in Addis hinders serious filmmakers from getting a chance to have their productions seen. They simply crowd out what little venue is available for films to be shown.