Kenya: Al Shabaab leader surrenders to Somali government - The Standard. Somalis upbeat for turning point in the new year. Somalia's new Parliament and Senate take oath of office. Somalia unveils new foreign policy to attract investments. Turkey's President Erdogan set to open country's largest embassy in Mogadishu. Somalia offers Yemenis a safer home. Read this article in: عربي Abokor Abdullahi and his family in their one-room home GARDO, 2 February 2016 (IRIN) - Somalia is the new home for 30,560 people who have fled the fighting in Yemen and are trying to adjust to life in a country that – while no longer written off as a “failed state” – certainly has its challenges. 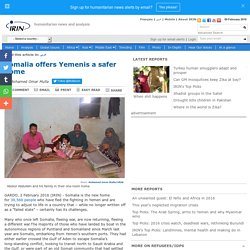 Many who once left Somalia, fleeing war, are now returning, fleeing a different war.The majority of those who have landed by boat in the autonomous regions of Puntland and Somaliland since March last year are Somalis, embarking from Yemen’s southern ports. They had either earlier crossed the Gulf of Aden to escape Somalia’s long-standing conflict, looking to transit north to Saudi Arabia and the Gulf, or were part of an old Somali community that had settled in Yemen as traders. Somalia aims to rebuild the country by reviving the national language. INTEGRATION TV Mogadishu Finale: Somali Hooyos. Mogadishu, Somalia 2015. Mogadishu, the capital city of Somalia toward Security,Stability and Development.

Beyond The Massive Security Wall In Somalia. Garden in Mogadishu that attracts hundreds of families every weekend. TURKISH MOGADISHU. Somalia's First Female Presidential Candidate Inspired By Rwanda's Recovery Process. InterviewBy Collins Mwai The Federal Republic of Somalia is among African countries that are scheduled to have elections in the coming year. 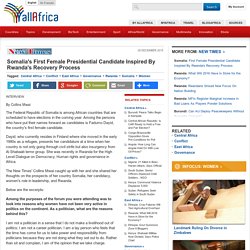 Among the persons who have put their names forward as candidates is Fadumo Dayid, the country's first female candidate. Dayid, who currently resides in Finland where she moved in the early 1990s as a refugee, presents her candidature at a time when her country is not only going through civil strife but also insurgency from Al Shabaab terror group. She was recently in Rwanda for the High Level Dialogue on Democracy, Human rights and governance in Africa.

The New Times' Collins Mwai caught up with her and she shared her thoughts on the prospects of her country Somalia, her candidacy, women's role in leadership, and Rwanda. Somalia no longer a failed state, just a fragile one, says UN. Somalia is no longer a failed state but a recovering fragile country, the top UN official for war-torn Somalia has said. 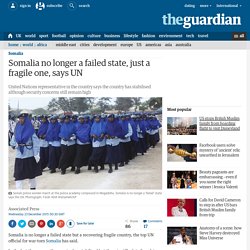 In the last three years the country has stabilised but there is still a lot of work to do, Nicholas Kay, the outgoing representative for the UN Secretary General in Somalia, told The Associated Press. “The country in the past two-three years has come together quite significantly. It is both politically stable and developed as well,” he said. Somalia’s Islamic extremist insurgents, al-Shabab, who are allied with al-Qaida, will not succeed in undermining the progress being made but the prospect of some members shifting allegiance to the Islamic State group is a real concern, Kay said.

A-glimpse-of-hope-for-mogadishu-1.1896588# AFP Residents relax on Lido beach in 2014 along the Indian Ocean's coastal city of Mogadishu. 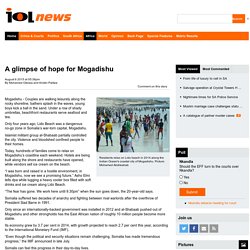 Finn aims to be first female president of Somalia. Fadumo Dayib moved to Finland in the 1990s to escape the civil war in Somalia. 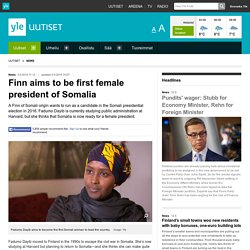 She’s now studying at Harvard but planning to return to Somalia—and she thinks she can make quite an impact on the country. ”I want to be Somalia’s president because I believe women have a chance to lead Somalia,” said Dayib. ”Women lead the country economically, manage family budgets and are very visible in society, but they have been kept out of politics. Somalia is now ready for a female president.” In addition to improving the position of women in Somali society, Dayib’s campaign themes are fighting youth unemployment, protecting minorities and improving education. ”It’s shocking that we have a younger generation that hasn’t experienced anything but war,” said Dayib. ”They can’t even imagine any other kind of future than war and destruction.” Dayib will go to Somalia next year, when her campaign officially gets off the ground. Log into Facebook. Infographic - How remittances move from overseas to Somalia - Business. Somalia introduces free mobile banking services. Will Somalia’s hydrocarbon boom oil or spoil its future?

– Dominik Balthasar Currently thought of as the petroleum sector’s latest ‘frontier region’, Somalia constitutes not only one of the most promising, but also most the most challenging of potential oil exporting countries. 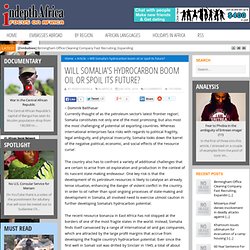 Whereas international enterprises face risks with regards to political fragility, legal ambiguity, and physical insecurity, Somalia looks down the barrel of the negative political, economic, and social effects of the ‘resource curse’. Mogadishu's mayor signs deal with Istanbul municipality to clean up city. Focus On Somalia: MOGADISHU TAXIS Ep.22. Somaliland: Country Set for Major Port Investment. Berbera Airport By: ELEANOR WHITEHEAD Somalilandsun - The republic of Somaliland is finalizing a huge port investment, boosting its efforts to serve as a trade hub between the African and Arab worlds. 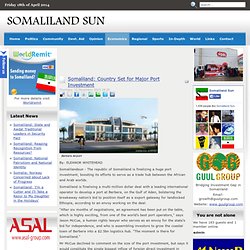 Somaliland is finalising a multi-million dollar deal with a leading international operator to develop a port at Berbera, on the Gulf of Aden, bolstering the breakaway nation's bid to position itself as a export gateway for landlocked Ethiopia, according to an envoy working on the deal. "After six months of negotiations, an agreement has been put on the table, which is highly exciting, from one of the world's best port operators," says Jason McCue, a human rights lawyer who serves as an envoy for the state's bid for independence, and who is assembling investors to grow the coastal town of Berbera into a $2.5bn logistics hub. "The moment is there for Somaliland. " "We are trying to see how we could get international partners to help us with infrastructure. Somalia Business. Somalia: A Destination for Growth?

Somali diaspora drawn back to Mogadishu. Pages: 1 2 As the Somali capital Mogadishu emerges from years of war, it has become a magnet for investors from the diaspora. 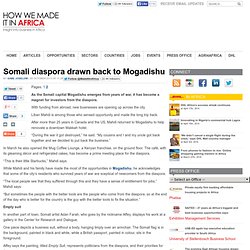 With funding from abroad, new businesses are opening up across the city. Liban Mahdi is among those who sensed opportunity and made the long trip back. After more than 25 years in Canada and the US, Mahdi returned to Mogadishu to help renovate a downtown Makkah hotel. “During the war it got destroyed,” he said. In March he also opened the Mug Coffee Lounge, a Kenyan franchise, on the ground floor. “This is their little Starbucks,” Mahdi says. Somalia's future: Standing on its own. A New Somalia. Investors keenly eye Somalia opportunities. Many investors are now seeing Somalia as an increasingly enticing market for investment as the country starts rebuilding itself from scratch/FILE NAIROBI, Kenya, June 3 – After 22 years of civil strife and political turmoil, a new era has dawned on Somalia and the country is embarking on a dynamic path of political and economic renewal. 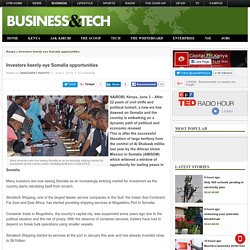 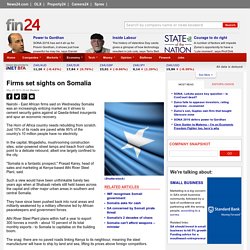 The Horn of Africa country needs rebuilding from scratch. Just 10% of its roads are paved while 95% of the country's 10 million people have no electricity. In the capital, Mogadishu, mushrooming construction sites, solar-powered street lamps and beach front cafes point to a delicate rebound, albeit one largely confined to the city. "Somalia is a fantastic prospect," Prasad Karey, head of sales and marketing at Kenya-based Athi River Steel Plant, said.

Such a view would have been unthinkable barely two years ago when al Shabaab rebels still held bases across the capital and other major urban areas in southern and central Somalia. They have since been pushed back into rural areas and militarily weakened by a military offensive led by African peacekeepers and government forces.