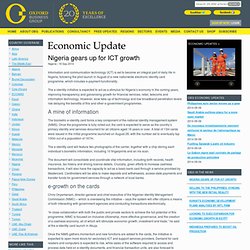 The e-identity initiative is expected to act as a stimulus for Nigeria’s economy in the coming years, improving transparency and galvanising growth for financial services, retail, telecoms and information technology. However, slow take-up of technology and low broadband penetration levels risk delaying the benefits of this and other e-government programmes. Stakeholders Recommend Measures To Reduce 17million Housing Deficit.

Taking into cognisance the huge housing deficit plaguing the country and the factors militating against achieving affordable housing in Nigeria, the Quantity Surveyors Registration Board Of Nigeria (QSRBN) during her 4th Annual Building and Construction Economic Round-Table (BCERT 4) which held recently held in Abuja vigorously discussed the way forward in the sector. 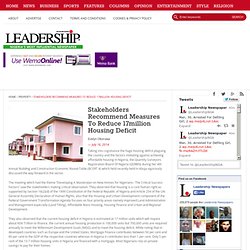 The meeting which had the theme “Developing A Masterplan on New Homes for Nigerians– The Critical Success Factors” saw the stakeholders making critical observation. They also observed that the current housing deficit in Nigeria is estimated at 17 million units which will require about N56 Trillion to finance, the current annual housing production is 100,000 units but 700,000 units are required annually to meet the Millennium Development Goals (MDG) and to meet the housing deficit. Manufacturers look inwards as local input content rises to 59% Local manufacturers are becoming increasingly aware of the availability of abundant raw materials in the country as they now source more inputs within the economy than from abroad. 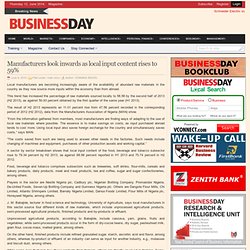 This trend has increased the percentage of raw materials sourced locally to 58.58 by the second half of 2013 (H2 2013), as against 50.93 percent obtained by the first quarter of the same year (H1 2013). The result of H2 2013 represents an 11.01 percent rise from 47.56 percent recorded in the corresponding period of 2012 (H2 2012), data from the Manufacturers Association of Nigeria (MAN) show. “From the information gathered from members, most manufacturers are finding ways of adapting to the use of local raw materials where possible. The essence is to make savings on costs, as input purchased abroad tends to cost more. Using local input also saves foreign exchange for the country and simultaneously saves costs,” says MAN. International Finance Corp to advise Nigeria's Firstmonie. Jonathan inaugurates Committee on Nigeria Industrial Revolution Plan. 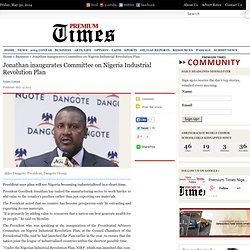 President Goodluck Jonathan has tasked the manufacturing sector to work harder to add value to the country’s produce rather than just exporting raw materials. The President noted that no country has become prosperous only by extracting and exporting its raw materials. “It is primarily by adding value to resources that a nation can best generate wealth for its people,” he said on Monday. The President who was speaking at the inauguration of the Presidential Advisory Committee on Nigeria Industrial Revolution Plan, at the Council Chambers of the Presidential Villa, said he had launched the Plan earlier in the year, to ensure that the nation joins the league of industrialized countries within the shortest possible time.

FG targets 30,000 MW electricity from renewable energy sources. The Federal Government plans to invest in renewable energy to supplement power generation from conventional means and satisfy the energy needs of Nigerians, Minister of State for Power, Mohammed Wakil has said. 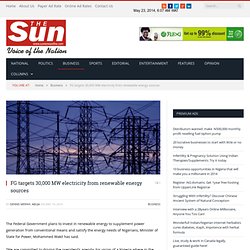 “We are committed to driving the president’s agenda, his vision of a Nigeria where in the next one decade, more than 30,000MW of electricity will be generated from renewable sources,” said Wakil. “It is to that end that we are also working on Presidential Initiative on Renewable Energy for power generation.

This is to provide needed political support at the highest level of government for local and foreign investment and drive in solar, wind, small hydro and bio mass power,” he added. Speaking while receiving in his office the Vice President of China Hydro International, Mr. Africa's Richest Man To Invest $2.3 Billion In Plan To Fight Boko Haram. Nigerian bourse records $89m in turnover - business. Copyright : APA The Nigerian Stock Exchange recorded a turnover of shares worth about $89 million traded in 19,078 deals during the four-day trading week by investors on the floor of the NSE.The Nigerian government declared Thursday 1st May, 2014 as public holiday to mark Workers’ Day. 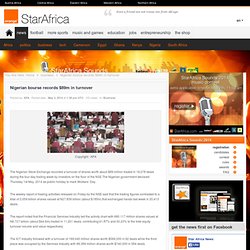 The weekly report of trading activities released on Friday by the NSE said that the trading figures contrasted to a total of 2.059 billion shares valued at N27.839 billion (about $185m) that exchanged hands last week in 20,413 deals. The report noted that the Financial Services Industry led the activity chart with 680.117 million shares valued at N6.727 billion (about $44.6m) traded in 11,201 deals, contributing 61.87% and 50.23% to the total equity turnover volume and value respectively. The ICT Industry followed with a turnover of 169.045 million shares worth $566,000 in 62 deals while the third place was occupied by the Services Industry with 99.369 million shares worth $740,000 in 584 deals. How Nigeria’s economic boom could be down to improved payment systems.

With Nigeria having recently eclipsed South Africa as the continent’s biggest economy, it is worth taking a look the nation’s progress from the perspective of a service that is indispensable to the modern way of life — electronic payments. 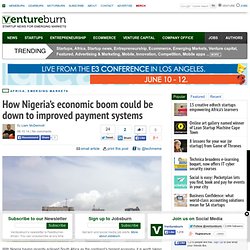 And electronic payments, in turn, depend on suitable telecommunications and banking infrastructure. The pace of change in Nigeria is remarkable and, having been in the country for frequent periods around the early 2000s as part of the birth of the modern payments industry in that country, change is nowhere more noticeable than in the retail banking sector. Having recently returned there this year in a payments consultant capacity, the benefit of such an extended hiatus is the comparison of two distanced snapshots: the differences are quite stark and immediately noticeable. A decade ago, there were almost no electronic payment systems at all. Nigeria: Value of consumer market to hit US$1.4t by 2030.

The value of Nigeria’s consumer market could reach US$1.4 trillion by 2030, from the current yearly figure of US$400 billion, according to a report by the Mckinsey Global Institute(MGI). 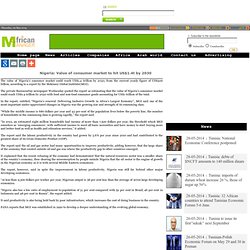 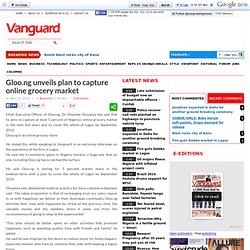 Gloo.ng is an online grocery store. He stated this while speaking to Vanguard in an exclusive interview on the operations of the firm in Lagos. He said the e-commerce space in Nigeria remains a huge one that no one, including Gloo.ng has scratched the surface. Domestic Investors Now Dominate Nigerian Stock Market – Okumagba. Mr Albert Okumagba is the managing director, BGL Group and the chairman,planning committee,Third annual national workshop of Chartered Institute Of Stockbrokers (CIS). 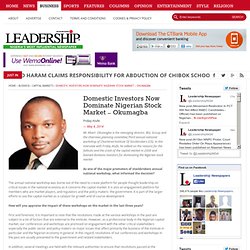 In this interview with Friday Atufe, he talked on the reasons for the fallouts and the crash of the capital market in 2008 and blamed domestic investors for dominating the Nigerian stock market As one of the major promoters of stockbrokers annual national workshop, what informed the decision? The annual national workshop was borne out of the need to create platform for people thought leadership on critical issues in the national economy as it concerns the capital market. It is also an engagement platform for members who are market players, and regulators and the policy makers- the government. FG sets aside $300m risk guarantee for investors in power sector. ABUJA – The Federal Government says it has set aside 300 million dollars as a partial risk guarantee to protect investors in the power sector. The partial risk guarantee is a risk-sharing mechanism that provides banks with a partial coverage of risk exposure against loans made for energy efficiency projects.

This is contained in a statement issued by Mr Olawale Rasheed, the Special Assistant (Media) to the Minister of State for Power, Alhaji Mohammed Wakil on Saturday in Abuja. The statement quoted Wakil as saying this at a discussion on Power Sector in Africa organised by the U.S. Department of Commerce in Miami, Florida. Nigeria needs 51,000 engineers to boost power sector reform, says Institute. ABUJA – The National Power Training Institute of Nigeria (NAPTIN) has said that country requires 51,000 engineers to fast-track the power sector reform. Currently, the sector has an estimated 200 young engineers, craftsmen and fitters out of the required 51,000 engineers. Ths Director-General of the Institute, Mr Reuben Okeke, gave the figure on Monday in Abuja at the induction 220 beneficiaries of Subsidy Reinvestment Empowerment Programme (SURE-P).

Okeke said that the nation’s power sector had suffered dearth of young and qualified electrical engineers due to employment embargo since 1998. He said that government had offered to train the 220 beneficiaries free, pay them stipend and sponsor them for post-graduate courses. Mr Peter Esele, representing the SURE-P Chairman, Gen. Esele stated that the training would also engage young Nigerians in agriculture, information technology, construction, creative arts, shipping and marine, oil, gas, hospitality and automobile.

CAC registers 38,419 new companies, businesses in 3 months. ABUJA – The Corporate Affairs Commission (CAC) on Tuesday said it had registered a total of 38,419 new companies/businesses nationwide in the first quarter of 2014. This is contained in a statement signed by the commission’s Director of Public Affairs, Mr Williams Churchill, and made available to the News Agency of Nigeria (NAN) in Abuja. According to the statement, the figure comprises 19,057 limited liability companies, 17,399 business names and 1,963 incorporated trustees popularly known as non-governmental organisations (NGOs). It said the commission had relaxed its registration processes and procedures, making it possible for applicants to register their companies/businesses directly without passing through lawyers, chartered accountants and chartered secretaries.

“The commission has simplified its processes and procedures. Investors and entrepreneurs desirous of tapping from Nigeria’s abundant investment opportunities can now incorporate their companies with ease. Nigerian Social Video Startup PublicVine Secures $5m Investment. Nigerian Nam Mokwunye’s startup, PublicVine has been boosted by a $5 million investment as it readies for its June 6th 2014 global launch.

The US-based platform is a web-based marketplace for videos enabling vendors and consumers of videos to share, rent and sell. “We have secured about $5 million investment in the United States due to the potential that people had seen in it,” Nam Mokwunye, PublicVine’s CEO was quoted as saying by Nigerian news platform, BusinessDaily. The firm which Mokwunye said was designed to rival existing platforms is also aimed at revolutionizing the global use and distribution of video content. According to him, video vendor registration (VVR) had already started on its website, with Nigeria chosen as a starting point of its VVR events due to the large market already existing in the West African country.

“We have seen the local film industry grow astronomically and observed that latent potential for further growth,” said Mokwunye. Source. Nigeria promises affordable housing. How E-Commerce is Helping Nigeria Fix Its Internet Reputation. Monty Munford is the founder of Mob76, a company that helps companies become investible and prepares them for exit. Seven Energy Set to Power Up Nigeria. Wednesday, April 16, 2014. Non-oil exports to ECOWAS market rise to $375m. Nigeria’s quest for economic diversification has received a boost as its non-oil exports to 15 member-states of the Economic Community of West African States (ECOWAS) by the end of 2013 moved to $375.338 million, from $312.477 million and $276.53 million recorded in 2012 and 2011, respectively.