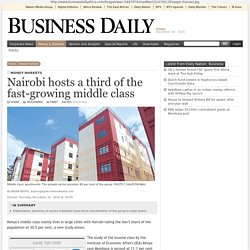 The private sector provides 80 per cent of the group. PHOTO | SALATON NJAU Kenya’s middle class mainly lives in large cities with Nairobi taking the lion’s share of the population at 30.5 per cent, a new study shows. The study of the income class by the Institute of Economic Affairs (IEA) Kenya says Mombasa is second at 11.1 per cent and Kisumu third at 3.1 per cent. Other towns hosting the class include Nakuru (2.8 per cent), Eldoret (1.9 per cent) and Thika (1.8 per cent).

Urbanisation and the presence of service industries such as finance, insurance, construction and education have led to the concentration of the middle class in large towns, says the study. “The middle class constituted of those earning between Sh76,392 to Sh102,429 in 2015 or Sh49,656 to Sh67,380 in 2009,” said IEA chief executive Kwame Owino during the launch. The middle class, according to the study, is primarily drawn from the formal sector comprising 272,569 employees as at 2015. 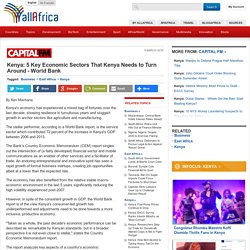 The stellar performer, according to a World Bank report, is the service sector which contributed 72 percent of the increase in Kenya's GDP between 2006 and 2013. The Bank's Country Economic Memorandum (CEM) report singles out the intersection of (a fairly developed) financial sector and mobile communications as an enabler of other services and a facilitator of trade. An enduring entrepreneurial and innovative spirit has seen a rapid growth of formal business startups, creating job opportunities albeit at a lower than the expected rate. Kenya: Kidero to Launch Night Market to Promote 24hr Economy. By Simon Ndonga Nairobi — A night market targeting young traders that's aimed at promoting a 24 hour economy in Nairobi is set to be launched next week at the Kenyatta International Convention Centre. 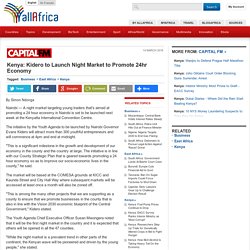 The initiative by the Youth Agenda to be launched by Nairobi Governor Evans Kidero will attract more than 300 youthful entrepreneurs and will commence at 4pm and end at midnight. How getting water from an ATM is saving lives (and wallets) in Nairobi. People in a slum called Mathare in Nairobi, Kenya, are now hitting up water ATMs for their water needs. 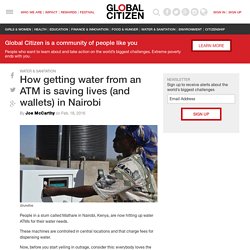 These machines are controlled in central locations and that charge fees for dispensing water. Now, before you start yelling in outrage, consider this: everybody loves the water ATM. Kenya: Call Centre Services Set Up Earns Kenya a Place in Top 50. By James Kariuki Kenya is the latest entrant in the top 50 countries recognised for call centre services driven by reliable Internet connection and a 7,000-strong labour force. 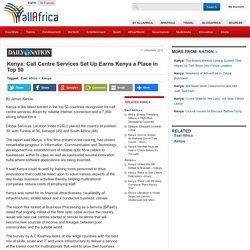 Global Services Location Index (GSLI) placed the country at position 39, with Tunisia at 38, Senegal (45) and South Africa (48). The report said Kenya, a first time entrant in the ranking, had shown remarkable progress in Information, Communication and Technology development via establishment of reliable optic fibre cables to businesses within its cities as well as sponsored several innovation hubs where software applications are being invented. It said Kenya could do well by training more personnel to drive innovations that could be relied upon to solve various aspects of the day-to-day business activities thereby helping multinational companies reduce costs of employing staff.

Banking and Financial News,Islamic Business and Finance, Commercial Banking. The report findings underline the strength of the Kenyan economy; as it welcomes growing attention from UAE organisations – following recent initiatives from Dubai Chamber and leading UAE companies such as Dubai Exports to connect business in the UAE and Kenya. 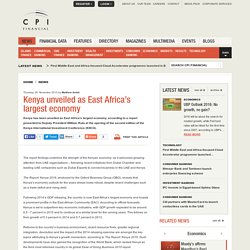 The Report: Kenya 2016, produced by the Oxford Business Group (OBG), reveals that Kenya’s economic outlook for the years ahead looks robust, despite recent challenges such as a trade deficit and rising debt. Following 2014’s GDP rebasing, the country is now East Africa’s largest economy and boasts a prominent profile in the East African Community (EAC). According to official forecasts, Kenya is set to outperform key economic indicators, with GDP growth expected to be around 6.5 - 7 percent in 2015 and to continue at a similar level for the coming years. Kenya reviewing the 70-30% rule forcing foreign investors into JV with locals - Ecofin Agency. (Ecofin Agency) - Kenya’s government announced on November 13, it would review the rule that forces foreign investors to hold not more than 70% of stakes in a company and partner with locals. 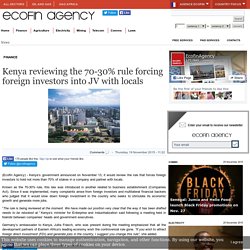 Known as the 70-30% rule, this law was introduced in another related to business establishment (Companies Act). Since it was implemented, many complaints arose from foreign investors and multilateral financial backers who judged that it would slow down foreign investment in the country who seeks to stimulate its economic growth and generate more jobs. “The rule is being reviewed at the moment. Kenyan Millionaire Numbers Seen Rising at Double Global Pace. The number of U.S. 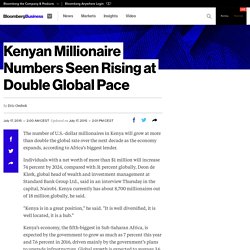 -dollar millionaires in Kenya will grow at more than double the global rate over the next decade as the economy expands, according to Africa’s biggest lender. Individuals with a net worth of more than $1 million will increase 74 percent by 2024, compared with 31 percent globally, Deon de Klerk, global head of wealth and investment management at Standard Bank Group Ltd., said in an interview Thursday in the capital, Nairobi. Kenya’s Vision 2030 to fast track at Special economic zones. NAIROBI: After decades of under-performance, the Chinese economy almost stagnated during the 1970s. 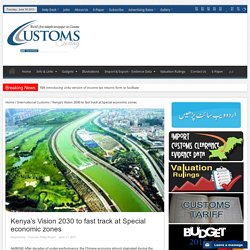 This occasioned calls for systemic change and pervasive economic reforms, buoyed in part by signals from the top national leadership to institute open door policy. This was a qualitative shift from the centralised and planned economic policies hitherto adopted by the country. To move its economy towards modernisation and internationalisation, China chose Special Economic Zones (SEZs) which are perhaps the most emblematic of market-oriented economies only helped to underscore that dramatic shift. World Bank - Africa "Kenya" Kenyan passport among the 50 most powerful in the world. The Kenyan passport has been ranked among the 50 most powerful in the world. 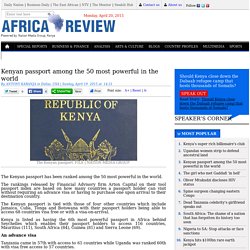 The rankings released by Financial Advisory firm Arton Capital on their tool passport index are based on how many countries a passport holder can visit without requiring an advance visa or having to purchase one upon arrival to their destination country. The Kenyan passport is tied with those of four other countries which include Jamaica, Cuba, Tonga and Botswana with their passport holders being able to access 68 countries visa free or with a visa-on-arrival.

Kenya is listed as having the 6th most powerful passport in Africa behind Seychelles which enables their passport holders to access 116 countries, Mauritius (111), South Africa (84), Guinea (81) and Sierra Leone (69). Kenya begins constructing security wall along Somali border. Nairobi, April 14 The Kenyan government has begun constructing a security wall along its border with Somalia to curb cross-border incursions by Somali Al-Shabaab militants. Director of Immigration Services Gordon Kihalangwa, who officially broke the ground in Mandera late on Monday, urged the locals to support the project which he said would help prevent Al Shabaab militants from crossing into Kenya, Xinhua news agency reported. Kihalangwa said the wall would run from Mandera in the north to Kiunga in the east coast, covering Mandera, Wajir, Garissa and Lamu counties. He said the purpose of the wall was to demarcate the Kenya-Somalia border besides securing the country from Al Shabaab militants, adding that the government was doing everything possible to sensitise members of the public on the importance of the wall.

Kihalangwa said the wall would not bar cross-border movement, adding that there would be designated points for exit and entry into the country. Kenya’s tea exports reach 499 million in 2014. At the end of the 2013/2014 campaign, Kenya produced 444.8 million kilograms of tea, 12.6 million kilograms more than the previous season.

As well as infrastructure development, Kenya's economy would benefit from the drop in global oil prices, which would spur the manufacturing sector and lift consumption, he said. "There is a lot of economic activity and potential growth in almost all sectors is tangible," Rotich said in response to questions emailed by Reuters. However, he said the outlook still remained susceptible to security concerns. 238 Kenyans on list of those with Swiss bank accounts. In total Kenyans are holding $557 Million in a single Swiss-bank. The amount is equivalent to what the east African country has budgeted for infrastructure projects such as roads, airports and ports in the year 2014/2015. The expose by the International Consortium of Investigative Journalists (ICIJ) followed the stealing of HSBC client data by Herve Falciani, a former IT employee of HSBC’s Swiss private bank. HSBC said Falciani downloaded details of accounts and clients at the end of 2006 and early 2007.

French authorities have obtained data on thousands of the customers and shared them with tax authorities elsewhere. “The maximum amount of money associated with a client connected to Kenya was $35.8 million (Sh3.27billion),” the report showed and further revealed that some 742 Kenyans or individuals with Kenya links were operating 1,093 bank accounts with HSBC. What makes Nairobi Africa's 'most intelligent' city. According to the Intelligent Community Forum, "intelligent communities" are those that have taken "conscious steps" to create an economy that can prosper in the "broadband economy. " The group has recently released its latest rankings, recognizing the achievements of communities that have built inclusive, prosperous economies on a basis of information and communication technologies. Nairobi was the only African city to appear on their shortlist of 21 hubs throughout the world for 2015.