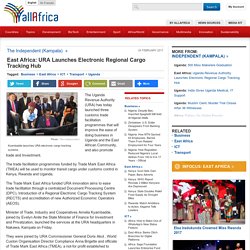 The Uganda Revenue Authority (URA) has today launched three customs trade facilitation programmes that will improve the ease of doing business in Uganda and the East African Community, and also promote trade and Investment. The trade facilitation programmes funded by Trade Mark East Africa (TMEA) will be used to monitor transit cargo under customs control in Kenya, Rwanda and Uganda. 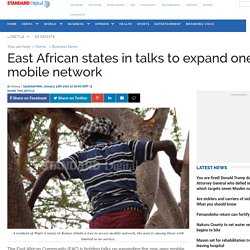 Francis Wangusi, Director General of the Communications Authority of Kenya, told a regional internet forum in Nairobi that currently, only Kenya, Uganda, Rwanda and South Sudan are members of the single mobile area network. "We are currently in talks so that Tanzania and Burundi can also join the one-area mobile network where all calls amongst countries will be treated as domestic calls," Wangusi said. Kenya, Uganda, Rwanda and South Sudan have formed a one-area network under the Northern Transport Corridor Network. When fully implemented, the network will reduce the cost of making calls across the trading bloc. Djibouti inaugurates first passenger train. East Africa: Ad-Supported Music Platform Mdundo Gets 1 Million Users and Has Expanded Across East Africa, Further Expansion Planned.

Unlike for African VoD platforms, there was a far less frantic pace of growth for African online and mobile music platforms last year. 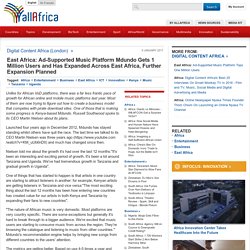 Most of them are now trying to figure out how to create a business model that competes with pirate download sites. One of those that is making some progress is Kenya-based Mdundo. Russell Southwood spoke to its CEO Martin Nielsen about its plans. Launched four years ago in December 2012, Mdundo has stayed standing whilst others have quit the race. The last time we talked to its CEO Martin Nielsen was three years ago ( and much has changed since then. Nielsen told me about the growth it's had over the last 12 months:"It's been an interesting and exciting period of growth. "The nature of African music is very domestic.

The metrics are getting better. The business model is that the user gets free use and the company is advertising supported. So what are the revenues like for artists from the platform? 65% of its traffic comes from Google searches. Construction of Road Connecting Ethiopia and Kenya Competed « ETHIOPIA 360. East Africa Spearheads Post-Harvest Loss Reduction. East Africa Region is expected to hold Postharvest Technology congress next year to address and reduce the level of loss that account for more than 30 per cent of the food produced for human consumption. 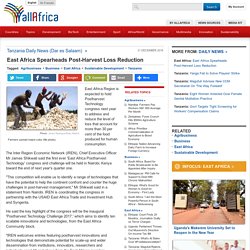 The Inter Region Economic Network (IREN), Chief Executive Officer Mr James Shikwati said the first ever 'East Africa Postharvest Technology' congress and challenge will be held in Nairobi, Kenya toward the end of next year's quarter one. "This competition will enable us to identify a range of technologies that have the potential to help the continent confront and counter the huge challenges in post-harvest management," Mr Shikwati said in a statement from Nairobi. 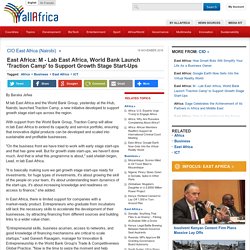 With support from the World Bank Group, Traction Camp will allow m:lab East Africa to extend its capacity and service portfolio, ensuring that innovative digital products can be developed and scaled into sustainable and profitable businesses. "On the business front we have tried to work with early stage start-ups and that has gone well. East Africa attracts more investors as rest of continent suffers – The Exchange. Share Tweet Email The Foreign Direct Investment, FDI, to East Africa grew last year in contrast to an overall drop across Africa from $87 billion to $66.5 billion. 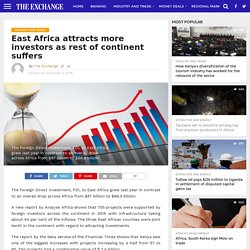 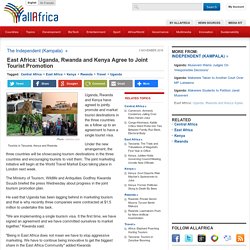 Under the new arrangement, the three countries will be showcasing tourism destinations in the three countries and encouraging tourists to visit them. The joint marketing initiative will begin at the World Travel Market Expo taking place in London next week. The Ministry of Tourism, Wildlife and Antiquities Godfrey Kiwanda Ssuubi briefed the press Wednesday about progress in the joint tourism promotion plan.

He said that Uganda has been lagging behind in marketing tourism and that is why recently three companies were contracted at $1.5 million to undertake this task. Tanzania, Burundi urged to scrap work permit fees for East Africans. More needs to be done by the East African Community (EAC) for the region to achieve universal free movement of goods and people, according to Stephen Ruzibiza, the Private Sector Federation (PSF) chief executive officer. 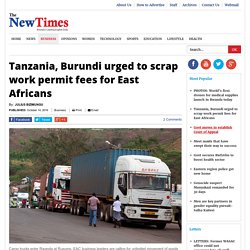 “We are promoting free movement of labour and services, but if some countries are still reluctant to implement what other partner states have agreed on over the past few years, then it’s far-fetched. Tanzania and Burundi have not yet scrapped work permit fees for regional citizens, which affects free movement of labour across the region,” he said. He was speaking in a telephone interview from Nairobi Kenya, where he was attending the inaugural East African Business and Entrepreneurship Conference and Exhibition on Wednesday. The conference, which ended on Wednesday, attracted participants from the five EAC member countries. Ruzibiza said the fees and long procedures of acquiring work permits have made it hard for traders and professionals to operate in the two countries. 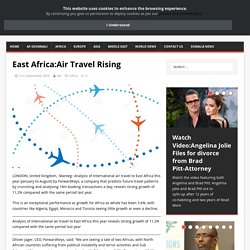 This is an exceptional performance as growth for Africa as whole has been 5.6%, with countries like Algeria, Egypt, Morocco and Tunisia seeing little growth or even a decline. Analysis of International air travel to East Africa this year reveals strong growth of 11.2% compared with the same period last year Olivier Jager, CEO, ForwardKeys, said: “We are seeing a tale of two Africas, with North African countries suffering from political instability and terror activities and Sub Saharan African countries powering ahead, with Ethiopia up 9.6%, Tanzania up 10.6%, Mauritius up 11.6% and Kenya up 14.9%. 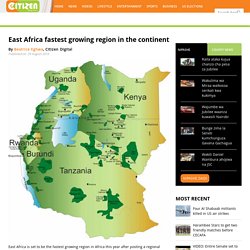 Throughout the region, the use of cement has been on the rise as construction sites crop up. Kenya National Bureau of Statistics (KNBS) data shows the consumption of cement in Kenya reached 5.23 million metric tonnes in November 2015, slightly higher than the 5.19 million metric tonnes registered in 2014. The data show construction sector grew by 11.3 per cent in the first quarter of 2015 compared to a growth of 7.6 per cent in a similar period in 2014. New Farm Africa project to help boost grain trade across eastern Africa - Latest news - Farm Africa.

26 April 2016 Farm Africa has received a new £3 million grant from the UK Government, through the FoodTrade East and Southern Africa trade enhancement and promotion programme. The grant will support 70,000 smallholder grain farmers in Tanzania and Uganda to gain access to regional export markets. The farmers will be linked to buyers in East Africa using an innovative online trading platform, G-Soko, and other market interventions.

While Tanzania and Uganda produce a surplus of staple foods, Kenya only grows enough maize to feed itself one year in every five. East Africa: Building of Hoima-Tanzania Oil Pipeline Will Start in January. By Francis Mugerwa Construction of the Uganda-Tanzania crude oil export pipeline is planned to start in January next year, Uganda's Energy minister Irene Muloni has said. Ms Muloni, who led the Ugandan team that held closed door discussions with the Tanzanian delegation in Hoima Town on Tuesday, told the media that the two countries had agreed to fast-track the project which will cover 1,443 kilometres. The construction of the pipeline, meant to export the Ugandan crude oil to the international market, is planned to be finalised by 2020.

How the cost of communication affects growth in East Africa – The Exchange. 9 Shares Share Tweet Email 0.0456 of what? 0.0456 or approximately 4.6 USD cents ($0.0456) is the average cost of one minute of talk time on a mobile phone in the East Africa Community (EAC). Energy costs in East Africa, how they fair in comparison to other regions and what to expect in future – The Exchange.

5 Shares Share Tweet Email Today’s indicator figure is 14.8. 14.8 what? 14.8 US cents is the average cost for one kilowatt of energy for East African domestic and industrial consumers. E. African nations warned to turn down deal with EU – The Exchange. 4 Shares Share Tweet Email Kenya and the four other nations of the EAC are required to ratify the Economic Partnership Agreement (EPA) before the end of the month, gradually reducing unlimited market access for exports from the EU.

Economic Partnership Agreements (EPAs) are trade and development agreements negotiated between the EU and African, Caribbean and Pacific (ACP) partners engaged in regional economic integration processes. Some say that the EPAs are unfair trade deals which Europe is trying to negotiate with it’s 76 former colonies – some of the poorest countries in the world. While Kenya reluctantly signed the accord in 2014, the agreement, which the civil society and the United Nations have cited as dangerous, is yet to be approved by Parliament. EAC has been negotiating with the EU as a trading bloc. Other EAC nations are classified as Least Developed Countries and would still qualify for preferential treatment in trading with the rest of the richer World. East Africa: Promising Future for Motorcycle Assembly in East Africa. Africa: New East Africa Institute Targets to Train 10,000 Health Staff. Grant funding offered to East African logistics entrepreneurs. East Africa: Ethio-Kenya Road Construction Nearing Completion.

"Once the road is complete, it will have significant impact in regional integration and boost trade for the benefit of Kenya and Ethiopia. " The Kenya National Highways Authority (KeNHA) says the construction of the road linking Kenya to Ethiopia will be completed soon. The road covers Merille-Marsabit 121 kilometres and Turbi-Moyale 122 kilometres, Capital FM reported. The Authority said that the sections form part of the strategic transport corridor linking Mombasa Port to Addis Ababa.

Rwanda, Tanzania Presidents open Rusumo border facilities. Rwanda, Kenya, Uganda to start joint electronic cargo tracking in June. A joint real-time transit cargo monitoring scheme by Kenya, Uganda and Rwanda will kick off by June to help curb dumping and theft of goods. “By June 2016, goods moving along the northern corridor (Mombasa-Kigali) will be monitored in real time, curbing dumping, theft and other vices,” Uganda Revenue Authority (URA) said in an update. The Electronic Cargo Tracking System (ECTS) comprises satellites, a monitoring centre and special electronic seals fitted on cargo containers and trucks, which give the precise location of goods in real time.

The system triggers an alarm whenever there is diversion from the designated route, an unusually long stopover or when someone attempts to open a container. “On implementation, Kenya and Uganda will jointly attach electronic seals onto cargo at Mombasa. The implication is that goods cannot disappear in anyone’s territory. East Africa: Private Equity Deals in East Africa Now Valued At $152m. Uganda: Kenya Officials to Meet Uganda in Crude Pipeline Tug of War.

East Africa: EAC Moves to Reduce Heavy Reliance On U.S Dollar in Intra-Regional Trade. Northern Corridor Integration project makes headway. East Africa: EAPP Endorses Master Plan to Inter-Connect East Africa. The 11th Council of Ministers for the Eastern African Power Pool (EAPP) has endorsed a master plan to inter-connect the region through energy. The East African Power Pool, set up in 2005, includes Burundi, Democratic Republic of Congo, Egypt, Ethiopia, Kenya, Rwanda, Sudan, Libya and Tanzania with South Sudan and Djibouti expected to join soon. The EAPP, which is based in Addis Ababa, concluded its three day meeting at the end of last week, finalizing and amending its new master plan which was drawn up by a Danish company, Energinet. Member states will meet in March to develop a strategic plan in line with this. East Africa: Regional High Voltage Lines Expected By 2018. By Kennedy Senelwa. East Africa: Kenya, Uganda Plan Electronic Platform to Monitor Goods.