Government of Mozambique in final negotiations with oil and gas prospecting companies. December 2nd, 2016 Home Mozambique The negotiation process with the companies that were awarded the 5th international tender for oil and gas research areas in Mozambique is expected to be completed within three to four months, announced in Maputo the Minister of Mineral Resources and Energy, Leticia Klemens. 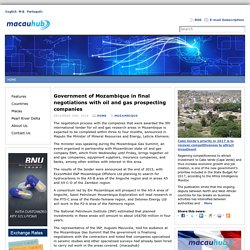 The minister was speaking during the Mozambique Gas Summit, an event organised in partnership with Mozambican state oil and gas company ENH, which from Wednesday until Friday, brings together oil and gas companies, equipment suppliers, insurance companies, and banks, among other entities with interest in this area. Mozambique doubles natural gas exports in 2015. December 17th, 2015 News Mozambique’s natural gas exports doubled this year to approximately 115.4 million gigajoules, announced Tuesday the Mozambican minister of Mining Resources and Energy, Pedro Couto. 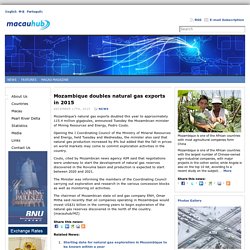 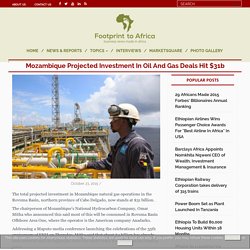 The chairperson of Mozambique’s National Hydrocarbon Company, Omar Mitha who announced this said most of this will be consumed in Rovuma Basin Offshore Area One, where the operator is the American company Anadarko. Addressing a Maputo media conference launching the celebrations of the 35th anniversary of ENH on Thursday, Mitha said that about $4 billion has already been invested and the figure for Area One could reach $24 billion in the coming years. He broke this sum down as $5.6 billion for the preliminary exploration, $10 billion for building two gas liquefaction plants – known as ‘trains’, $3.3 billion for later development studies, $4.4 billion in interest and bank fees, and $2.6 billion as contingency funds. 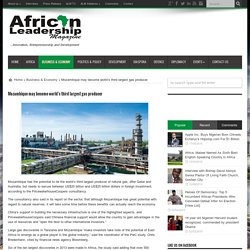 The consultancy also said in its report on the sector, that although Mozambique has great potential with regard to natural reserves, it will take some time before these benefits can actually reach the economy. Massive gas discovery transforms Mozambique backwater into boomtown. CNN Marketplace Africa covers the macro trends impacting the region and also focuses on the continent's key industries and corporations. 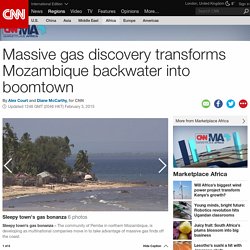 As boats bob just outside the port terminal dedicated to oil and gas companies, commercial divers check the welds and make sure the barges are ship shape. One of them is Cremildo Marsena. "To become a diver is something that I had as a dream," he says. "It's good money, which makes me happy...Mozambicans love the sea and we have to stand up and try to make money when it's the time to make money. " In Pemba, the time to make money is now. According to Standard Bank, Liquefied Natural Gas (LNG) will add $39 billion to the Mozambican economy over the next 20 years, boosting GDP per capita from approximately $650 in 2013, to $4500 by 2035.

Changing landscape Once a dusty regional backwater, Pemba town is already changing as a result of the country's enviable natural resources. Anadarko finds more gas with latest well onshore Mozambique. London (Platts)--29Dec2014/1221 pm EST/1721 GMT Anadarko has made a gas discovery with its latest well in Mozambique testing an onshore target in the gas-rich Rovuma basin, a partner in the concession said Monday. 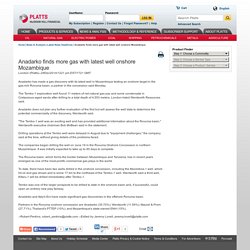 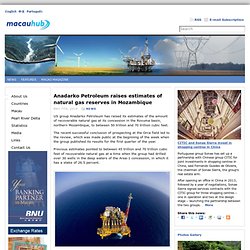 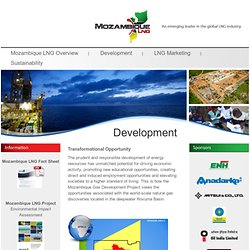 This is how the Mozambique Gas Development Project views the opportunities associated with the world-scale natural gas discoveries located in the deepwater Rovuma Basin. Flow Assurance The results to date of the drillstem testing (DST) program in the Prosperidade and Golfinho/Atum complexes demonstrate the outstanding flow characteristics of the reservoirs. Each flow test successfully flowed at facility-constrained rates of 90 to 100 million cubic feet per day (MMcf/d), which supports well designs of 100 to 200 MMcf/d. Focused. Baobab Resources plc - Tete Project, Mozambique.

Australia’s Triton Minerals discovers new graphite outcrops in Mozambique. Mozambique looks to cash in on expected gas bonanza. Mozambique was once ravaged by conflict after independence from Portugal in 1975. 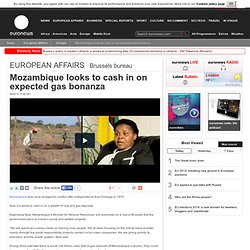 Now it is about to cash in on a wealth of coal and gas deposits. Esperança Bias, Mozambique’s Minister for Mineral Resources, told euronews on a visit to Brussels that the government plans to invest in social and welfare projects. “We will spend any money made on training local people. We’ve been focusing on the critical issue of water, mainly through the social responsibility projects carried out by major companies. We are giving priority to education and the health system,” Bias said. Energy firms estimate there is some 100 trillion cubic feet of gas reserves off Mozambique’s shores. Mozambique’s economy has largely been based on agriculture and tourism, but it is hoped this natural resources boom will raise living standards and boost growth. According to UN figures more than 50 percent of the county’s 20 million people still live below the poverty line. Oil Rush in Mozambique After World’s Largest Natural Gas Discoveries.

Mozambique AFRICANGLOBE - Statoil and Tullow Oil are finishing a well aimed at achieving the first commercial oil discovery in Mozambique, the East African country where explorers have made the century’s largest natural gas discoveries. 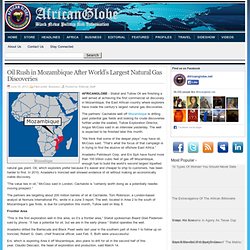 The partners’ Cachalote well off Mozambique is drilling past potential gas fields and looking for crude discoveries further under the seabed, Tullow Exploration Director, Angus McCoss said in an interview yesterday. The well is expected to be finished later this month. “We think that some of the deeper plays” may have oil, McCoss said. “That’s what the focus of that campaign is in trying to find the elusive oil offshore East Africa.” O projeto da Vale em Moçambique. Mozambique LNG: Gastech 2012. Anadarko finds natural gas off Mozambique - Energy Ticker. By Claudia Assis. Mining group Gold One International to start mining for gold in Mozambique.

The Italian firm still has 50 per cent of its biggest ever gas discovery – one that larger international oil and gas companies eye with envy, and chief executive Paolo Scaroni said the company may yet sell more. “It’s great early monetization on what is a world-class project and helps reduce Eni’s risk exposure to the area,” said Jason Kenney, oil analyst at Santander. It came as Eni outlined its strategy for the years ahead, raising its output growth target to 4 per cent a year from 3 per cent for the next four years, and promising higher returns for shareholders in future. Planned Mozambique LNG Project. Significant new exploration success in Mozambique - Eni. Price Sensitive San Donato Milanese (Milan), 25 February 2013 – Eni has made a new natural gas discovery within the Mamba Complex, in Area 4, offshore Mozambique, at the Coral 3 delineation well, which is the eighth well drilled back to back in Area 4.

The new discovery confirm the potential of Area 4 operated by Eni at 75 trillion cubic feet (Tcf) of gas in place of which 27 Tcf exclusively located in Area 4. Coral 3 was drilled in 2,035 meters of water and reached a total depth of 5,270 meters. The well is located approximately 5 kilometers south of Coral 1, 15 kilometers from Coral 2, and approximately 65 kilometers off the Cabo Delgado coast.

Italian group ENI finds more natural gas in Mozambique. December 6th, 2012 News. Revista Africa Today - Mozambique. Country will have the world’s fourth- largest natural gas reserves. According to the Organization for Economic Cooperation and Development (OECD) estimates, published on the Portuguese Investment Bank (Banco Português de Investimentos - BPI) website, the Mozambican economy is booming, with the prospect that the country has "a new place in the international chess".

Iron ore and titanium deposits found in Tete, Mozambique. August 6th, 2012 News Iron ore and titanium deposits with estimated reserves of 5 million tons have been found and inventoried during prospecting activities carried out by the Mozambican Ministry for Mining Resources in Tete province, the Mining Resources Minister said. At the opening of the 27th Coordinating Council held from 3 to 6 August in the town of Cateme, in the Moatize district of Tete province, Minister Esperança Bias said that the pre-feasibility study for construction of an iron foundry in the Tenge area, some 50 kilometres from the city of Tete, was about to be concluded.