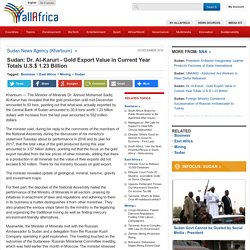 Ahmed Mohamed Sadiq Al-Karuri has revealed that the gold production until mid-December amounted to 93 tons, pointing out that what was actually exported by the Central Bank of Sudan amounted to 30.8 tons worth 1.23 billion dollars with increase from the last year amounted to 552 million dollars. Sudan: Ministry of Minerals - Over 45 Tons of Gold, the Country Production in Six Months.

Khartoum — The mid-annual performance report of the Sudanese Company for Mineral Resources, the supervisory body at the Ministry for Mineral, has revealed that he overall gold production for the first half of the current fiscal year has exceeded 45 tones. 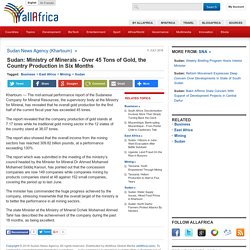 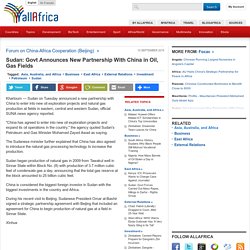 "China has agreed to enter into new oil exploration projects and expand its oil operations in the country," the agency quoted Sudan's Petroleum and Gas Minister Mohamed Zayed Awad as saying. The Sudanese minister further explained that China has also agreed to introduce the natural gas processing technology to increase the production. Sudan began production of natural gas in 2009 from Tawakul well in Sinnar State within Block No. (8) with production of 3.7 million cubic feet of condensate gas a day, announcing that the total gas reserve at the block amounted to 25 billion cubic feet. 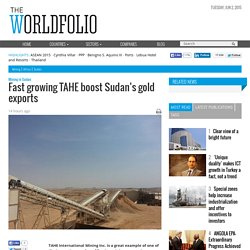 Since then, the mining company has been heavily contributing to the development of the country’s mining sector – providing vital transfer of expertise – as well as contributing to the Sudanese economy by helping to boost the country’s exports of gold. Immediately after signing the concession agreement, TAHE began exploring in June 2010, and it took less than a year to make the discovery of the Abu Sara gold mine. Then in 2012, the company finished constructing its first production plant. Of course TAHE does not plan to stop there though. InvestView. On Sunday, Sudanese President Omar al-Bashir said that the country has plans to develop their natural gas market by driving foreign investment into the country, Reuters reported.President-Omar-al-Bashir With gas reserves estimated at 3 trillion cubic feet, plans include extraction and import of natural gas to facilitate industrial and power generation. 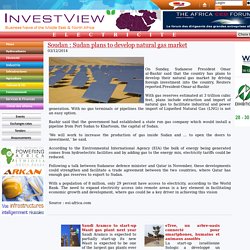 With no gas terminals or pipelines the import of Liquefied Natural Gas (LNG) is not an easy option. Sudan Predicted to Be Africa's Largest Gold Producer By 2018. InvestView. Sudan Vision Daily - Details. South Sudan makes $1bn in oil sales. South Sudan made almost $1bn from oil sales since resuming production in April, of which it had to pass on a quarter to arch foe Sudan for exporting crude through its territory, the oil ministry said on Thursday. 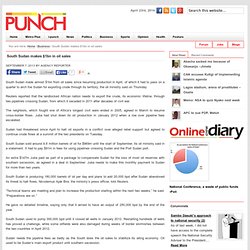 Reuters reported that the landlocked African nation needs to export the crude, its economic lifeline, through two pipelines crossing Sudan, from which it seceded in 2011 after decades of civil war. The neighbors, which fought one of Africa’s longest civil wars ended in 2005, agreed in March to resume cross-border flows. Juba had shut down its oil production in January 2012 when a row over pipeline fees escalated. Sudan to produce 50 tonnes of gold this year, earning $2.5 bln. Sudan digs for gold as prices rise - 15 Dec 09. Traditional mining for gold in Sudan. Manajim mining for gold in the Sudan.

Sirocco Energy redies for work in Sudan. PERTH (miningweekly.com) - Junior oil and gas explorer Sirocco Energy would have capital in place by the end of this month to fund its work programme on Block 14, in the Sudan. 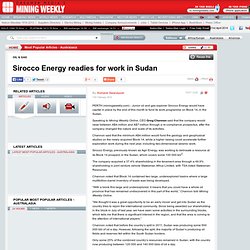 Speaking to Mining Weekly Online, CEO Greg Channon said that the company would raise between A$4-million and A$7-million through a re-compliance prospectus, after the company changed the nature and scale of its activities. Channon said that the minimum A$4-million would fund the geology and geophysical studies on the newly acquired Block 14, while a higher raising could accelerate further exploration work during the next year, including two-dimensional seismic work.

Sirocco Energy, previously known as Agri Energy, was working to delineate a resource at its Block 14 prospect, in the Sudan, which covers some 100 000 km2. The company acquired a 37.4% shareholding in the tenement area through a 49.9% shareholding in joint venture vehicle Statesman Africa Limited, with TSX-listed Statesman Resources. Sudan and Saudi Arabia to start exploration in Red Sea. Sudan Awards Nine Oil Exploration Contracts, SUNA Reports. Sudan awarded nine contracts with 17 international companies that will invest $500 million to explore for oil in the African nation, state-run SUNA news agency reported. 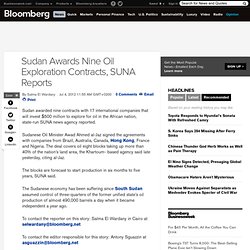 Sudanese Oil Minister Awad Ahmed al-Jaz signed the agreements with companies from Brazil, Australia, Canada, Hong Kong, France and Nigeria. The deal covers oil eight blocks taking up more than 40% of the nation’s land area, the Khartoum- based agency said late yesterday, citing al-Jaz. The blocks are forecast to start production in six months to five years, SUNA said. The Sudanese economy has been suffering since South Sudan assumed control of three-quarters of the former unified state’s oil production of almost 490,000 barrels a day when it became independent a year ago. To contact the reporter on this story: Salma El Wardany in Cairo at selwardany@bloomberg.net To contact the editor responsible for this story: Antony Sguazzin at asguazzin@bloomberg.net.