Kenya oil production set to start in March 2017, export by June. State to explore minerals found in Kenya. Kenya maps its mineral deposits. In Kenya: Britain's Tullow makes new oil find. Britain's Tullow Oil said on Wednesday it had made an oil discovery in Kenya, which could mean opening up a second oil basin for development in the country south of finds already made. 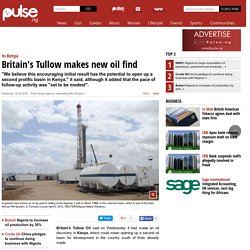 The East African nation and neighbouring Uganda have both made oil finds that have yet to start commercial production, part of a string of energy discoveries along the east coast of Africa. "The first well in the Kerio Valley Basin, Cheptuket-1, has encountered good oil shows across a gross interval of over 700 metres," Tullow said in a statement about the new find. "We believe this encouraging initial result has the potential to open up a second prolific basin in Kenya," it said, although it added that the pace of follow-up activity was "set to be modest".

Low oil prices have prompted international oil firms to reduce spending on exploration and development. A Kenyan government official had earlier said an announcement would be made on Wednesday about a new oil discovery in Kenya, but had not given details. Kenya Eyes Crude Exports in 2017 Via Trucks and Railway. By George Omondi Kenya is considering moving its crude oil to Mombasa by road and railway as President Uhuru Kenyatta's administration races to hit export markets before the General Election set for August next year. 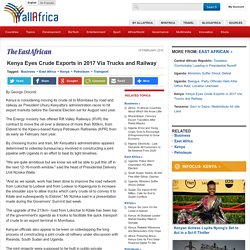 The Energy ministry has offered Rift Valley Railways (RVR) the contract to move the oil over a distance of more than 800km, from Eldoret to the Kipevu-based Kenya Petroleum Refineries (KPR) from as early as February next year. By choosing trucks and train, Mr Kenyatta's administration appears determined to sidestep bureaucracy involved in constructing a joint pipeline with Uganda in an effort to beat its tight timelines.

"We are quite ambitious but we know we will be able to pull this off in the next 12-16-month window," said the head of Presidential Delivery Unit Nzioka Waita. Transformers: Focus on fast growing mining industry in Kenya and what prospects it holds for country. Canadian firm discovers more oil in Kenya. Africa Oil announced the news after an independent assessment of the firm’s contingent resources in the South Lokichar Basin located in Blocks 10BB and 13T in the East African country. 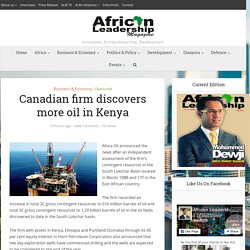 The firm recorded an increase in total 2C gross contingent resources to 616 million barrels of oil and total 3C gross contingent resources to 1.29 billion barrels of oil in the oil fields discovered to date in the South Lokichar basin. The firm with assets in Kenya, Ethiopia and Puntland (Somalia) through its 45 per cent equity interest in Horn Petroleum Corporation also announced that two key exploration wells have commenced drilling and the wells are expected to be completed by the end of the year. According to Keith Hill, Africa Oil’s president and chief executive officer, the independent assessment carried out reveals that the level of resources surpasses the threshold for development. All Eyes on Kenya: The Next Big Oil Exporter. Not even the specter of a spillover of Islamic extremism from Somalia can dampen the atmosphere in Kenya, where commercial oil production is expected to begin in 2016 and discovery after discovery has made this the hottest and fastest-paced hydrocarbon scene on the continent. 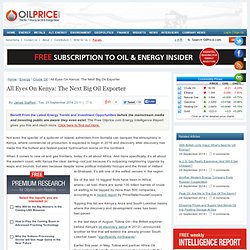 When it comes to new oil and gas frontiers, today it’s all about Africa. And more specifically, it’s all about the eastern coast, with Kenya the clear darling--not just because it’s outpacing neighboring Uganda by leaps and bounds, but also because despite some political instability hiccups and the threat of militant al-Shabaab, it’s still one of the safest venues in the region. Select the reports you are interested in:NO-SPAM: Under no circumstances will we EVER rent, sell or give away your email Six of the last 10 biggest finds have been in Africa, where—all told--there are some 130 billion barrels of crude oil waiting to be tapped by more than 500 companies, according to a recent report by PriceWaterhouseCoopers.

Kenya Emerges As East Africa's Oil Powerhouse. As a frontier market, the countries of Africa represent both tremendous opportunities and tremendous risks. 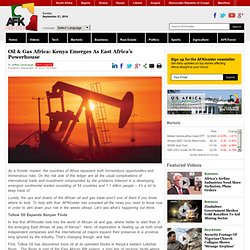 On the risk side of the ledger are all the usual complications of international trade and investment compounded by the problems inherent in a developing, emergent continental market consisting of 54 countries and 1.1 billion people – it’s a lot to keep track of. Luckily, the ups and downs of the African oil and gas trade aren’t one of them if you know where to look.

Kenya on fast track to join world's exporters. Kenya From Nowhere Plans East Africa’s First Oil Exports: Energy. Kenya is headed to become the first oil exporter in East Africa, moving in less than five years from being a have-not nation to the regional leader in cutting reliance on energy suppliers such as Royal Dutch Shell Plc. 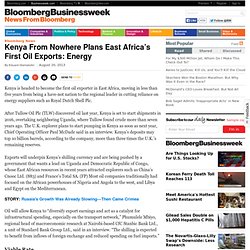 After Tullow Oil Plc (TLW) discovered oil last year, Kenya is set to start shipments in 2016, overtaking neighboring Uganda, where Tullow found crude more than seven years ago. The U.K. explorer plans to start pumping in Kenya as soon as next year, Chief Operating Officer Paul McDade said in an interview. Kenya’s deposits may top 10 billion barrels, according to the company, more than three times the U.K.’s remaining reserves. Exports will underpin Kenya’s shilling currency and are being pushed by a government that wants a lead on Uganda and Democratic Republic of Congo, whose East African resources in recent years attracted explorers such as China’s Cnooc Ltd. (883) and France’s Total SA. Viable Rate Bullish Idea Tullow and partner Africa Oil Corp. Local Refinery. Kenya to form state-owned company for mining. Nairobi, Kenya — 11 July 2013 – The government of Kenya is to form a state-owned company that will hold stakes in mines and establish a sovereign wealth fund to manage revenue from the industry. 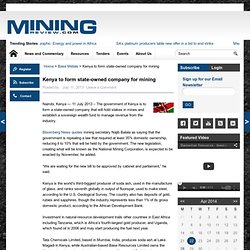 Bloomberg News quotes mining secretary Najib Balala as saying that the government is repealing a law that required at least 35% domestic ownership, reducing it to 10% that will be held by the government. The new legislation, creating what will be known as the National Mining Corporation, is expected to be enacted by November, he added. “We are waiting for the new bill to be approved by cabinet and parliament,” he said. In Kenya, the Next Big Oil Patch. By Eduard Gismatullin * Kenya’s-Twiga-well-produced-the-nation’s-first-commercial-oil-earlier-this-year Kenya’s Great Rift Valley, a 450-mile-long volcanic trench ripped open by shifting tectonic plates, is known as the cradle of mankind for the million-year-old remains of human forebears discovered there. 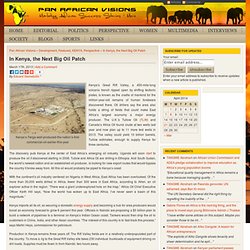 Kenya has announced the second profitable oil discovery in two months, a development that could give a needed boost to Kenya's economy. 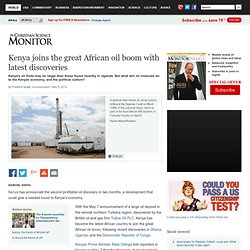 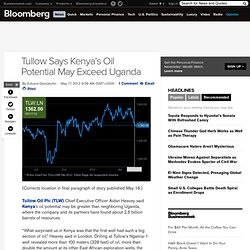 Tullow Oil Plc (TLW) Chief Executive Officer Aidan Heavey said Kenya’s oil potential may be greater than neighboring Uganda, where the company and its partners have found about 2.5 billion barrels of resources. “What surprised us in Kenya was that the first well had such a big section of oil,” Heavey said in London. Drilling at Tullow’s Ngamia-1 well revealed more than 100 meters (328 feet) of oil, more than double the amount at its other East African exploration wells, the company said earlier this month. Tullow, which has unlocked billions of barrels in frontier regions from Ghana to French Guiana, is seeking to replicate those finds in East Africa. While Kenya has no proven oil reserves, Exxon Mobil Corp.