306067-nigeria-earns-640-35-million-from-crude-export-nnpc. Egina FPSO: Samsung eyes future opportunities in Nigeria - Vanguard News Nigeria. With the successful completion of the Egina Floating Production Storage Offloading (FPSO) unit and the achievement of First Oil in the facility, Samsung Heavy Industries, together with partners, could be justified in spending time looking back with pride. 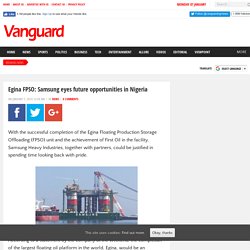 According to a statement by the company at the weekend, the completion of the largest floating oil platform in the world, Egina, would be an achievement for any yard. It is all the more extraordinary given this is the first ship fabricated by the $300 million fabrication and integration facility, which itself was created to build this ship. “A number of records were broken during construction. This is the first ever project to meet Nigeria’s demanding new standards for “local content”, which in simple terms means Nigerian-owned business delivering work in Nigeria. Vandalism, poor funding, cause of Nigeria's worst crude oil loss in 18 yrs. Steel coy generates N80m in 2017. View. Nigerian government to resume prospecting oil in Lake Chad basin. $17b illegal petrol sale: NNPC sacks three top shots - The Nigerian National Petroleum Corporation on Thursday confirmed the sacking of officials linked with its missing 130 million litres of petrol. 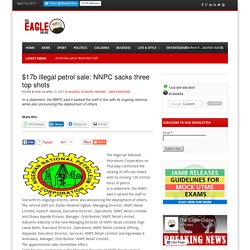 Lawal Bello, Executive Director, Operations, NNPC Retail Limited; Affiong Akpasubi, Executive Director, Services, NNPC Retail Limited; and Agwandas A. Copyright The Eagle Online.Permission to use quotations from this article is granted subject to appropriate credit being given to www.theeagleonline.com.ng as the source. $12bn Trans-Sahara Gas Pipeline on track - NNPC. By Michael Eboh ABUJA—The Nigerian National Petroleum Corporation, NNPC, yesterday, disclosed that it is committed to the Trans Saharan Gas Pipeline, TSGP, and that the project was still on track. 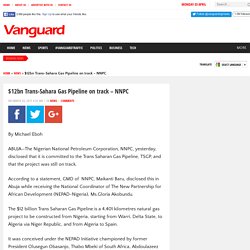 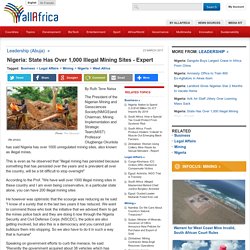 This is even as he observed that "illegal mining has persisted because something that has persisted over the years and is prevalent all over the country, will be a bit difficult to stop overnight" According to the Prof. "We have well over 1000 illegal mining sites in these country and I am even being conservative, in a particular state alone, you can have 200 illegal mining sites. US increases imports of Nigerian crude by 287% The United States almost tripled the volume of crude oil bought from Nigeria last year, seven years after it began depending less on the country ‘s crude. 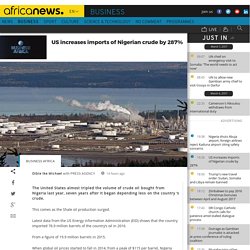 This comes as the Shale oil production surged. Latest data from the US Energy information Administration (EID) shows that the country imported 76.9 million barrels of the country’s oil in 2016. From a figure of 19.9 million barrels in 2015. When global oil prices started to fall in 2014, from a peak of $115 per barrel, Nigeria witnessed a further drop in the US imports of its crude from 87.4 million barrels in 2013 to a record of 21.2 million barrels. Nigeria: NNPC Recorded N197 Billion Loss in 2016. By Oladeinde Olawoyin The Nigerian National Petroleum Corporation, NNPC, has said that it recorded N197.49 billion total loss at the end of the 2016 financial year. 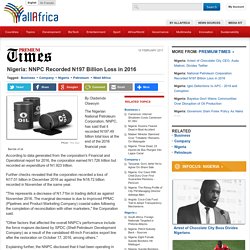 The marginal decrease is due to improved PPMC (Pipelines and Product Marketing Company) coastal sales following the completion of reconciliation with other marketers," the Corporation said. "The month's performance is attributed to the Federal Government's overtures to Niger Delta militants towards providing a lasting peace to the crisis," the report said. Nigeria’s quest for oil in Northeast — Business — The Guardian Nigeria. Abiodun Adesanya Nigeria has been prospecting for oil wells in the country’s North East. 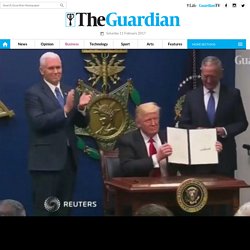 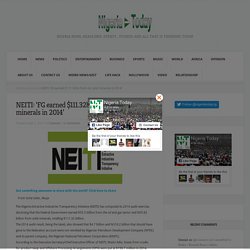 The 2014 audit result, being the latest, also showed that $4.7 billion and N318.2 billion that should have gone to the federation account were not remitted by Nigerian Petroleum Development Company (NPDC) and its parent company, the Nigerian National Petroleum Corporation (NNPC). According to the Executive Secretary/Chief Executive Officer of NEITI, Waziri Adio, losses from crude-for-product swap and Offshore Processing Arrangements (OPA) were put at $198.7 million in 2014.

“At the close of the 2014 audits, NPDC had not paid the outstanding $1.7 billion for the eight Oil Mining License’s (OMLs) under the Shell Joint Venture (JV) divested to it by the NNPC. Nigeria getting more revenue from sand than gold… 5 revelations from NEITI reports. The Nigeria Extractive Industries Transparency Initiative (NEITI) released its 2013 audit reports on Monday, analysing the returns in solid minerals, oil and gas exploration in the country. 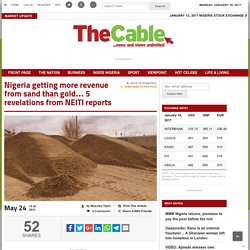 The reports, which were categorised into oil and gas, and solid minerals, had a number of interesting revelations for the Nigerian state and the state of her mining industry. Here are five things learnt from NEITI’s reports: Gold is one of the most expensive commodities on the international market. As at Tuesday afternoon, gold was trading at $1241.70 per ounce (28 grams). Sand on the other hand sells around $70 for a truckload. NNPC, Schlumberger Collaborate On Frontier Exploration. The Nigerian National Petroleum Corporation, NNPC, has stepped up collaboration with the reputable multinational oil service company, Schlumberger, in the deployment of state-of-the-art technology in the ongoing search for commercial hydrocarbon deposits in the Chad basin and other parts of the inland sedimentary basins. 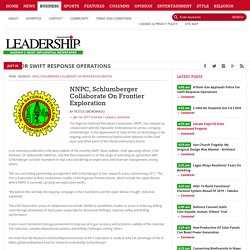 In an interview published in the latest edition of the monthly NNPC News bulletin, chief operating officer, COO Ventures, Dr. Babatunde Adeniran, said that the Corporation is on the verge of executing an agreement with Schlumberger to foster teamwork in vital areas bordering on exploration and reservoir management among others. “We are concluding partnership arrangement with Schlumberger in four research areas commencing 2017.

The first is Exploration & Risks Assessment studies of the Nigerian Frontier Basins, which include the Upper Benue where NNPC is currently carrying out exploration works. Nigeria to Begin Tracking of Oil Production, Sales Destination. By Chineme Okafor Abuja — Nigeria will from this year begin to track the volume of its crude oil production from fields of production and loading bays, to sales destinations in a renewed effort to cut down on prevalent oil theft and loss of revenue, the Minister of State for Petroleum Resources, Dr. Ibe Kachikwu, has said. Speaking in a podcast he released tuesday in Abuja where he made projections of his work this year, Kachikwu also said he would initiate processes to gradually move the country away from holding annual crude oil lifting contracts to looking for partners that it could sign long-term lifting agreements with.

The minister explained that the country has lost huge revenues from oil production slippages and thefts, and would in this regard finally move to stop these practices. Nigerian government to set up $500 million exploration fund. Non-implementation of gas flare penalties costs Nigeria N2.9trn. By Michael Eboh LACK of political will on the part of the Federal Government to enforce its own laws on gas flare penalties, has cost the country $14.298 billion between April 2008 and October 2016. Oando, Sahara Energy, 37 others to buy, sell Nigerian crude in 2017.

The Nigerian National Petroleum Corporation, NNPC, on Wednesday released the names of 39 bidders for the sale and purchase of Nigerian crude for 2017/2018. Announcing the results on its Website, the Group General Manager, Crude Oil Marketing Division NNPC, Mele Kyari, said the contract would run for one year effective from January1 for consecutive 12 circles of crude oil allocation.

It stated that out of the 215.43 billion scf of gas produced in October, a total of 121.63 billion scf was commercialised, comprising of 29.29 billion scf and 92.34 billion scf for the domestic and export markets, respectively. The gas flare rate in the month was 10.49 per cent, compared with the average flare rate of 9.36 per cent for the period of November 2015 to October 2016. Firm announces huge coal deposit find in Sokoto - SweetCrudeReports. *Coal miners. Nigeria to allocate new oil licenses to fund 2017 budget. The Federal Government will issue new oil licences as part of efforts to explore new streams of revenues to fund the 2017 budget, an official has said. The Minister of Budget and National Planning, Udoma Udoma, stated this when he appeared before the Senate Joint Committee on Appropriation and Finance to defend the revised Medium Term Expenditure Framework (MTEF) and the Fiscal Strategy Paper (FSP).