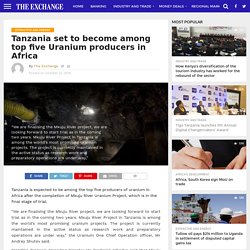 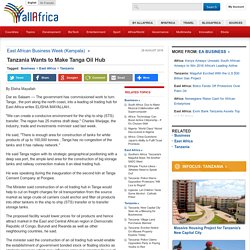 "We can create a conducive environment for the ship to ship (STS) transfer. The region has 25 metres draft deep. " Charles Mwijage, the industry, trade and investments mimnistr said last week. He said, "There is enough area for construction of tanks for white products of up to 100,000 tonnes ..Tanga has no congestion of the tanks and it has railway network. 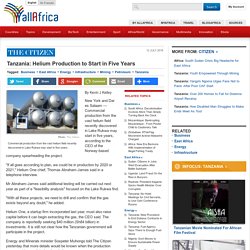 By Kevin J Kelley New York and Dar es Salaam — Commercial production from the vast helium field recently discovered in Lake Rukwa may start in five years, according to the CEO of the Norway-based company spearheading the project. "If all goes according to plan, we could be in production by 2020 or 2021," Helium One chief, Thomas Abraham-James said in a telephone interview. Mr Abraham-James said additional testing will be carried out next year as part of a "feasibility analysis" focused on the Lake Rukwa find.

"With all these projects, we need to drill and confirm that the gas exists beyond any doubt," he added. Tanzania: Helium 'Could Earn Tanzania U.S$3.5 Billion' Dar es Salaam — Some independent analysts say the recently discovered helium gas in Lake Rukwa could be worth $3.5 billion. 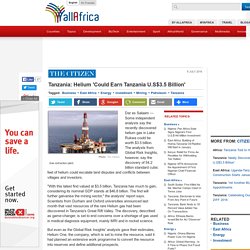 The analysts from Global Risk Insights, however, say the discovery of 54.2 billion standard cubic feet of helium could escalate land disputes and conflicts between villages and investors. "With this latest find valued at $3.5 billion, Tanzania has much to gain, considering its nominal GDP stands at $46.8 billion. Scientists and locals hail Helium reserves discovery in Tanzania. Huge Helium Gas Field Found in Africa Is a ‘Game Changer’ - Pan African Visions. (JOHANNESBURG) — The discovery of a huge helium gas field in East Africa is a “game changer for the future security of society’s helium needs” amid a global shortage, researchers in Britain said Tuesday. 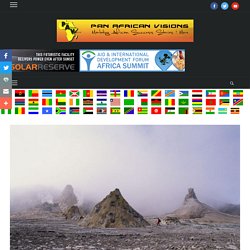 The discovery in Tanzania is the result of a new exploration approach for the precious gas that is essential to spacecraft, MRI scanners, nuclear energy, according to the Oxford University statement. Helium also fills party balloons. This is the first time helium has been found intentionally, said the statement. Tanzania’s $2bn coal, iron-ore projects to start soon. Dodsal Group discovers $8 billion worth of natural gas deposits in Tanzania. The company said Tanzania's biggest onshore gas discovery in the Ruvu Basin near Dar es Salaam is estimated to contain over 2.7 trillion cubic feet (TCF) of natural gas deposits. 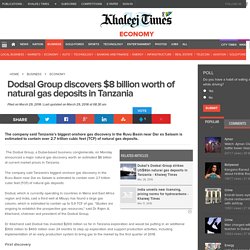 The Dodsal Group, a Dubai-based business conglomerate, on Monday announced a major natural gas discovery worth an estimated $8 billion at current market prices in Tanzania. Dodsal, which is currently operating in countries in Mena and East Africa region and India, said a third well at Mbuyu has found a large gas column, which is estimated to contain up to 5.9 TCF of gas. "Studies are ongoing to establish the prospective gas resources," said Dr Rajen A. Kilachand, chairman and president of the Dodsal Group. Kibaran raises $2m for Tanzania graphite project. JOHANNESBURG (miningweekly.com) – Australian junior Kibaran Resources is poised to finalise project financing for development of its Epanko graphite project, in Tanzania, after raising $2-million through a share placement at 15c apiece. 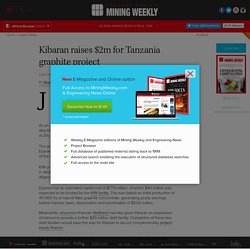 As an additional funding mechanism, the placees would receive one free attaching option for every two shares subscribed. The options were exercisable at 20c apiece and expired six months from the date of issue. The proceeds would be used in part to complete the due diligence process on Epanko being undertaken by KfW IPEX-Bank, the development funding agency of the German government, and independent engineering firm SRK. KfW provided indicative terms and conditions to Kibaran concerning $40-million in debt funding for Epanko. Finalisation of this debt facility was subject to a due diligence process, including a peer review of the project’s feasibility study. 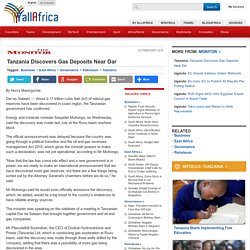 Energy and minerals minister Sospeter Muhongo, on Wednesday, said the discovery was made last July at the Ruvu basin onshore block. The official announcement was delayed because the country was going through a political transition and the oil and gas revenues management Act 2015, which gives the minister powers to make such a declaration, was not yet operational, according to Mr Muhongo. "Now that the law has come into effect and a new government is in power, we are ready to make an international announcement that we have discovered more gas reserves, but there are a few things being sorted out by the Attorney General's chambers before we do so," he said. Mr Muhongo said he would soon officially announce the discovery, which, he added, would be a big boost to the country's endeavour to have reliable energy sources. 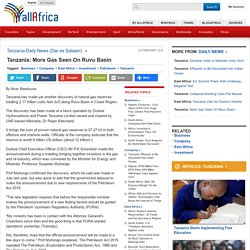 The discovery has been made at a block operated by Dodsal Hydrocarbons and Power Tanzania Limited owned and chaired by UAE-based billionaire, Dr Rejan Kilachand. It brings the sum of proven natural gas reserves to 57.27 tcf in both offshore and onshore wells. Officials of the company estimate that the reserve is worth 6 billion US dollars (about 12 trillion/-). Dodsal Chief Executive Officer (CEO) Mr P.K Surendran made the announcement during a meeting bringing together investors in the gas and oil industry, which was convened by the Minister for Energy and Minerals, Professor Sospeter Muhongo. Prof Muhongo confirmed the discovery, which he said was made in July last year, but was quick to add that the government delayed to make the announcement due to new requirements of the Petroleum Act 2015.

Tanzania: Oryx Builds LPG Liquefaction Plant. Oryx Energies has commissioned the first LPG Cylinder liquefaction plant in Tanzania, a move that would boost supply of gas in the country. 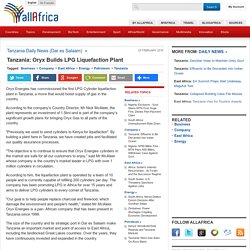 According to the company's Country Director, Mr Nick McAleer, the plant represents an investment of 1.5bn/-and is part of the company's significant growth plans for bringing Oryx Gas to all parts of the country. "Previously we used to send cylinders to Kenya for liquefaction". By building a plant here in Tanzania, we have created jobs and facilitated our quality assurance processes.

"The objective is to continue to ensure that Oryx Energies cylinders in the market are safe for all our customers to enjoy," said Mr McAleer whose company is the country's market leader in LPG with over 1 million cylinders in circulation. According to him, the liquefaction plant is operated by a team of 10 people and is currently capable of refilling 200 cylinders per day. Home. Geita Gold Mine Limited.

Tanzania cautiously inches towards gas economy. FOLLOWING massive discoveries of natural gas, Tanzania’s economy has started to get dividends from the resource, but some experts have already cautioned on misconceptions and management of community expectations. Tanzania Extractive Industries Transparency Initiative (TEITI), says since the country struck natural gas fields for the first time in 1974. So far, proven reserves are estimated at 55.08 trillion cubic feet (tcf). The country currently exploits a small amount of its vast gas resources at Songosongo in Lindi Region and Mnazi Bay in Mtwara Region. The gas currently produced is used to generate electricity and its share to Gross Domestic Product (GDP), is still small, with some sources putting it at 1.8 per cent as of 2014.

Untitled. By Alvar Mwakyusa AMID revelation that 77 per cent of Tanzanians are unaware of developments in natural gas and oil industry, a German organization Friedrich- Ebert-Stiftung (FES) has launched an almanac to provide updates on progress in the sector. Dubbed the Tanzania Oil and Gas Almanac, the database will be available in hard copy and on the internet in both Kiswahili and English languages. Speaking at the launch of the portal yesterday, retired Controller and Auditor General (CAG), Mr Ludovick Utouh, was hopeful that the almanac will enhance transparency in the nascent industry. Black Rock Mining makes graphite discovery in Tanzania.

Black Rock Mining makes graphite discovery in Tanzania Tuesday, August 04, 2015 by Proactive Investors Ulanzi Creek graphitic schist outcrop, for which 24 samples returned an average 10.44% TGC. Tanzania Gemstone plant handed over. Tanzania Likely to Become Next Major Producer of 'Rare Earth' Analysis By Fadhy Mtanga HAVING played host to one of the earliest gold mines in the country, a small dusty town in Mbeya Region is poised to become a significant producer of rare earth elements.

Some 189 kilometres from the district centre in Chunya, to the east of the Lake Rukwa, on the edge of the East African Rift Valley, there lies one of the largest and highest grade rare earth deposits in the world. Rare earth is a mineral that contains more rare earth elements as major metal components. It consists of 17 elements on the periodic table, including 15 elements beginning with atomic number 57 (lanthanum) and extending through number 71 (lutetium), as well as two other elements having similar properties (yttrium and scandium).

According to a study conducted in 2013 by Marc Humphries, a Specialist in Energy Policy based in United States, rare earth elements share many similar properties, which is why they occur together in geological deposits. Gunson Resources starts drilling at mineral sands project in Tanzania. 24th Nov 2014, 12:02 pm by Proactive Investors Gunson Resources (ASX:GUN) has recently completed a two week mapping and pan sampling program across a number of priority target areas in its 2000 square kilometre Tanzanian mineral sands portfolio. Statoil makes seventh natural gas discovery offshore Tanzania. Tanzania: Study to Put Dar On Right Track for Gas Economy. By Orton Kiishweko TANZANIA will embark on a five-year study on issues related to the natural resource management for inclusive growth ahead of the anticipated gas economy.

Details released in Dar es Salaam indicated that the study, which starts this year to 2019, would seek to understand gas and oil production, investments, local content, industry size, price levels and trajectories in the wider economy, such as government revenue, public expenditures and redistribution of wealth across the country. Home.

This Q&A was with Premesha Motha, Lead Analyst & Business Development Head at Neoedge Singapore. BG Group ups its Tanzania gas resources to 15 Tcf. BG Group on Tuesday announced an increase in total recoverable resources for the Mzia discovery and across Blocks 1, 3 and 4 offshore southern Tanzania, marking the conclusion of a successful drilling and testing campaign. Montero's Tanzania and Strategic Investor Advantage for Rare Earth Project Development. Statoil plans LNG plant after Tanzania gas find. Statoil ASA and Britain’s BG Group PLC plan to build a $10-billion (U.S.) Tanzania to Feed Asian Nickel-Cobalt Demand. Tanzanian Royalty Exploration (TSX:TNX,AMEX:TRX), a long-time explorer of Tanzania, is betting that the country’s Kabanga belt, which is rich in nickel, cobalt and platinum group elements, could soon become a major supplier to metal-hungry Asian nations. At the close of 2012, the historically gold-focused explorer announced plans to spin off Northwestern Basemetals Company to explore for nickel-related elements at Kabanga.

Tanzanian Royalty already holds numerous mineral concessions in this part of the country. Aside from the geological prospectivity of the area, a company press release cites the ease of shipping metal from Tanzania to Asian markets as one of its major reasons for the strategic move. As CEO Jim Sinclair stated, “Tanzania looks right across the Indian Ocean at the growing markets of India and China … If current trends continue, India and China will grow into membership of the three largest markets on the planet for these products.” China looks to East Africa. Bimg4a310a749fe87.jpg (JPEG Image, 700 × 479 pixels) African Eagle sees Tanzania nickel production in 2016. Tanzania Secures Funding for Massive Natural Gas Project. Firm begins work on graphite project.