Zimbabwe in joint venture with private firm for platinum refinery. Zimbabwe: Gold Mines to Invest U.S.$108 Million for Expansions. GOLD mining companies intend to invest about $108 million next year to expand operations and increase bullion production by between 10 to 100 percent; findings from the latest industry status report have shown.According to the State of the Mining Industry Report for 2016, 83 percent of surveyed mining firms said they would spend more on expansion in 2017 after injecting $22 million this year; on the back of strong and stable gold prices. 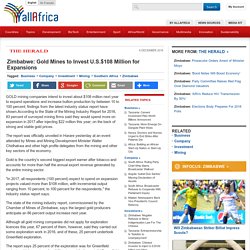 Zimbabwe: $100m for Kamativi Mine. A Chinese investor, Beijing Pinchang, is set to inject $100 million into Kamativi Tin Mine in Matabeleland North province in a deal that will see the company and the Zimbabwe Mining Development Corporation (ZMDC) jointly owning the entity, a cabinet Minister has said.The mine, which has been closed for 21 years, has around 40 million tonnes of open cast reserves and is considered one of the best tin mines in the world. 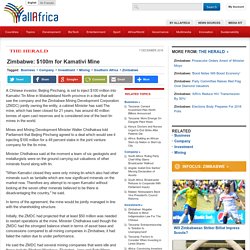 Mines and Mining Development Minister Walter Chidhakwa told Parliament that Beijing Pinchang agreed to a deal which would see it injecting $100 million for a 49 percent stake in the joint venture company for the tin mine. Minister Chidhakwa said at the moment a team of six geologists and metallurgists were on the ground carrying out valuations of other minerals found along with tin. "When Kamativi closed they were only mining tin which also had other minerals such as tantalite which are now significant minerals on the market now. 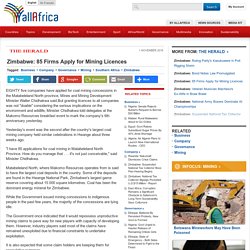 Yesterday's event was the second after the country's largest coal mining company held similar celebrations in Hwange about three weeks ago. "I have 85 applications for coal mining in Matabeleland North Province. How do you manage that . . . it's not just conceivable," said Minister Chidhakwa. Zimbabwe diamond operations among the best in Africa - Bulawayo24 News. Zimbabwe's Mugabe says government will take over all diamond operations. HARARE Zimbabwe's President Robert Mugabe said on Thursday that his government would take possession of all diamond operations because existing miners had robbed the country of its wealth. 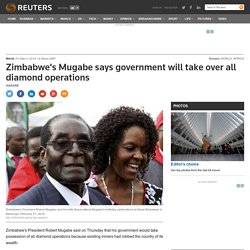 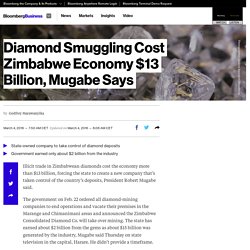 The government on Feb. 22 ordered all diamond-mining companies to end operations and vacate their premises in the Marange and Chimanimani areas and announced the Zimbabwe Consolidated Diamond Co. will take over mining. The state has earned about $2 billion from the gems as about $15 billion was generated by the industry, Mugabe said Thursday on state television in the capital, Harare. He didn’t provide a timeframe. “Lots of smuggling and swindling has taken place and the companies that have been mining, I want to say robbed us of our wealth,” Mugabe said. 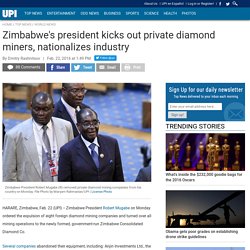 Several companies abandoned their equipment, including: Anjin Investments Ltd., the Diamond Mining Co., Jinan Mining Ltd., Kusena Diamonds, Marange Resources Ltd. and Mbada Diamonds. These organizations were invited to nationalize their assets but they chose to stay as private entities and give up whatever little political capital was built up. Untitled. NANCY SIAME, Lusaka SHI and Yani Mining Development Limited (SYMDL) intends to revamp the operations of the old Mkushi mine at an investment cost estimated at US$10 million. 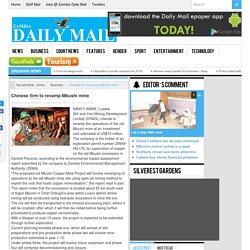 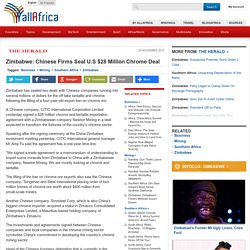 A Chinese company, CITIC International Corporation Limited yesterday signed a $28 million chrome and tantalite importation agreement with a Zimbabwean company Newton Mining in a deal expected to transform the fortunes of the country's chrome sector. Speaking after the signing ceremony at the China-Zimbabwe investment meeting yesterday, CITIC International general manager Mr Anqi Fu said the agreement has a one-year time-line. "We signed a trade agreement or a memorandum of understanding to import some minerals from Zimbabwe to China with a Zimbabwean company, Newton Mining. 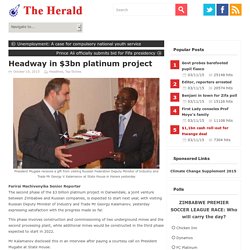 Kalamanov at State House in Harare yesterday Farirai Machivenyika Senior Reporter The second phase of the $3 billion platinum project in Darwendale, a joint venture between Zimbabwe and Russian companies, is expected to start next year, with visiting Russian Deputy Minister of Industry and Trade Mr Georgy Kalamanov, yesterday expressing satisfaction with the progress made so far. This phase involves construction and commissioning of two underground mines and the second processing plant, while additional mines would be constructed in the third phase expected to start in 2022. Mr Kalamanov disclosed this in an interview after paying a courtesy call on President Mugabe at State House. Zim starts cutting and polishing diamonds.

THE Zimbabwe Diamond and Technology Centre (ZDTC) has dispatched personnel to India to undergo training on operating scientific equipment which will enable to country to cut and polish its diamonds. 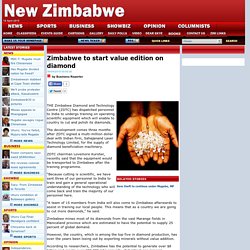 The development comes three months after ZDTC signed a multi-million dollar deal with Indian firm, Sahajanand Laser Technology Limited, for the supply of diamond beneficiation machinery. ZDTC chairman Lovemore Kurotwi, recently said that the equipment would be transported to Zimbabwe after the training programme. “Because cutting is scientific, we have sent three of our personnel to India to train and gain a general operational understanding of the technology who will come back and train the majority of our personnel here. “A team of 15 members from India will also come to Zimbabwe afterwards to assist in training our local people.

This means that as a country we are going to cut more diamonds,” he said. Exploitable gas in Lupane, minister. THE government has discovered gas reserves in the Lupane-Lubimbi basin estimated at over 23 billion cubic feet and would start exploitation this year, mines minister, Walter Chidhakwa has said. In an interview with The Source at the weekend, Chidhakwa said the exploration process has been completed and exploitation would start at some point this year. “Yes, we have discovered gas in the Lupane-Lubimbi basin and we gave Discovery Investments a special grant to start exploiting the gas,” said Chidhakwa but declined to give details. Calls to the local Discovery Investments office went unanswered. Work started in 2014 after government ordered Zimbabwe Mining Development Corporation (ZMDC), which has two coal-bed methane concessions in Lupane-Lubimbi area, to start exploring. The government granted the exploration of gas a National Project Status in 2007, but did not take action until last year.

More diamond deposits found in Zimbabwe - Africa - News - StarAfrica. Copyright : APA Deputy Mines minister Gift Chimanikire said Monday that four kimberlitic pipes rich in diamonds were discovered in Bikita district of Masvingo province in the south of Zimbabwe. He said a consortium of Chinese and Zimbabwean firms registered as Nan Jiang Africa Resources Ltd has already applied to the ministry for a licence to start exploiting the gems. “There are diamonds that were discovered in Devuli Ranch in Bikita by a consortium involving the Chinese and some Zimbabweans,” Chimanikire told the state-run Herald daily. Zimbabwe: Gas Discovered in Manicaland. MOZAMBICAN authorities have stumbled on the existence of natural gas and coal deposits in Manicaland Province.