Ethiopia: New Gem, Iron Dev't Sites Discovered. Encouraging results have been registered in iron ores and gemstone discovery and development in the first year of the second GTP period. 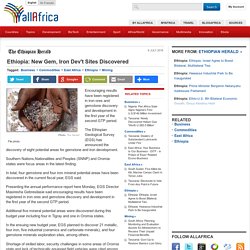 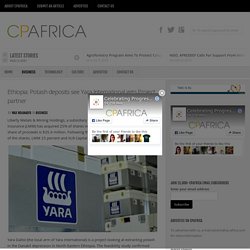 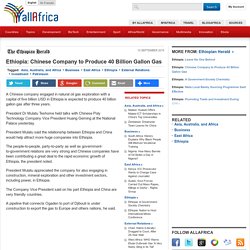 President Dr Mulatu Teshome held talks with Chinese Poly Technology Company Vice President Huang Geming at the National Palace yesterday. President Mulatu said the relationship between Ethiopia and China would help attract more huge companies into Ethiopia. The people-to-people, party-to-party as well as government-to-government relations are very strong and Chinese companies have been contributing a great deal to the rapid economic growth of Ethiopia, the president noted. President Mulatu appreciated the company for also engaging in construction, mineral exploration and other investment sectors, including power, in Ethiopia.

MIDROC strikes a gold mine, to invest 8 billion birr. Ethiopia plans to export natural gas by 2017. Ethiopia’s Mining Industry Worth $5bn. VENTURES AFRICA – Evolving reports on Ethiopia’s economic opportunities suggest that the country could be sitting on a $5 billion mining sector, the full value of which can be realized by tapping into geothermal sources. 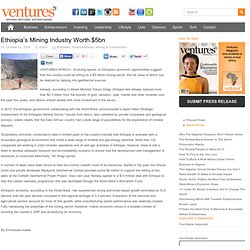 Already, according to Mines Minister Tolosa Shagi, Ethiopia had already realized more than $2.3 billion from the exports of gold, tantalum, opal, marble and other minerals over the past four years, and returns should double with more investment in the sector. Oil, gas discovered in Ethiopia's Garden Basin. The British Oil company, New Age has discovered some deposits of oil and gas in Elkuran- 3 around the Ogaden basin of Ethiopia.The discovery comes after a five-month appraisal that ended in October, with a targeted depth of 2,850 meters, a local newspaper in Ethiopia reported on Sunday. 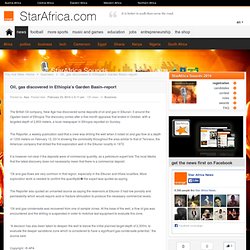 The Reporter, a weekly publication said that a crew was drilling the well when it noted oil and gas flow at a depth of 1200 meters on February 12, 2014 showing the commodity throughout the area similar to that of Tenneco, the American company that drilled the first exploration well in the Elkuran locality in 1972. It is however not clear if the deposits were of commercial quantity, as a petroleum expert told The local Media that the latest discovery does not necessarily mean that there is a commercial deposit.

Ethiopia earns over US$670 million in mineral exports. Portal at the Sakaro gold mine in Ethiopia Addis Ababa, Ethiopia — 02 July 2013 – The Ethiopian Ministry of Mines has announced that the government earned US$419 million from the export of minerals supplied by artisanal miners operating in the country in the first 11 months of the current financial year. 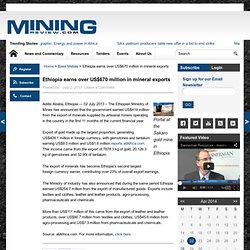 Export of gold made up the largest proportion, generating US$409.1 million in foreign currency, with gemstones and tantalum earning US$9.3 million and US$1.6 million reports allAfrica.com. This income came from the export of 7878.3 kg of gold, 20,126.3 kg of gemstones and 32.95t of tantalum. Invest in Ethiopian Energy: Ashenafi: Video. Last Stops on the East Africa Oil & Gas Frontier: Eritrea, Ethiopia. Eritrea is most likely sitting on massive oil and gas reserves, but the government doesn’t seem to be too interested in exploiting them—for now. 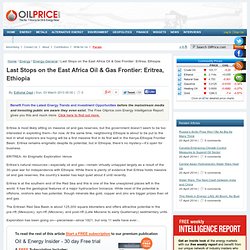 At the same time, neighboring Ethiopia is about to be put to the test in what explorers are hoping will be a first massive find in its first well in the Kenya-Ethiopia Frontier Basin. Eritrea remains enigmatic despite its potential, but in Ethiopia, there’s no mystery—it’s open for business. ERITREA: An Enigmatic Exploration Venue Eritrea’s natural resources—especially oil and gas—remain virtually untapped largely as a result of the 30-year war for independence with Ethiopia. While there is plenty of evidence that Eritrea holds massive oil and gas reserves, the country’s leader has kept quiet about it until recently. Ethiopia: A Potentially Golden Block on East Africa’s Tertiary Rift. (This report is part of Oilprice.com’s premium publication Oil & Energy Insider. 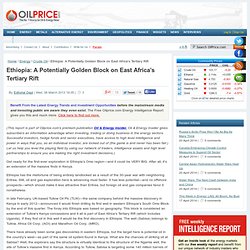 Oil & Energy Insider gives subscribers an information advantage when investing, trading or doing business in the energy sectors. Successful investors, hedge funds and senior executives, have access to high level intelligence and power in ways that you, as an individual investor, are locked out of (the game is and never has been fair.) Let us help you level the playing field by using our network of traders, intelligence assets and high level partnerships to ensure you are making the right investment decisions.)