Ethiopia, Kenya headed to Belt and Road Forum in Beijing. China says that 28 governments so far have confirmed they will attend the Belt and Road Forum for International Cooperation (BRF) in Beijing in May, with the attendees including President Uhuru Kenyatta of Kenya and Prime Minister Hailemariam Desalegn of Ethiopia. 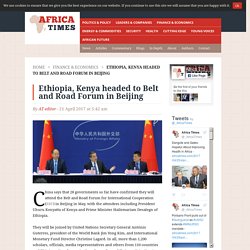 They will be joined by United Nations Secretary General António Guterres, president of the World Bank Jim Yong Kim, and International Monetary Fund Director Christine Lagard. In all, more than 1,200 scholars, officials, media representatives and others from 110 countries and 61 international organizations have planned their participation to date. Speaking at a press conference, Chinese Foreign Minister Wang Yi and Deputy Director of the National Development and Reform Commission Wang Xiaotao said the May 14-15 gathering is the highest level of international conference since Chinese President Xi Jinping first focused on China’s Silk Road initiative. Image: PRC Ministry of Foreign Affairs Related. DRC, Mozambique and Zambia secure power interconnection fund – new Business Ethiopia (nBE) The NEPAD-IPPF (Infrastructure Project Preparation Facility) has approved US $3.88 million in grants to the Governments of the Democratic Republic of Congo (DRC), Mozambique and Zambia to finance completion of regional projects preparations. 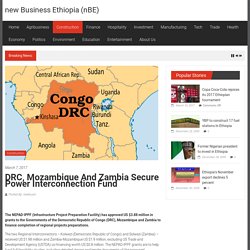 The two Regional Interconnectors – Kolwezi (Democratic Republic of Congo) and Solwezi (Zambia) – received US $1.98 million and Zambia-Mozambique US $1.9 million, excluding US Trade and Development Agency (USTDA) co-financing worth US $0.8 million. The NEPAD-IPPF grants are to help fund full feasibility studies, including detailed design and tender documents of the proposed high-voltage direct current (HVDC) 330-/400-kV transmission lines within two years.

The projects have already attracted downstream financing interest from donors in the region and other financial institutions. Both interconnectors will increase the transmission capacity within the SAPP as well as enhance energy security for the respective countries. Mauritius plans flights to Kolkata and Hyderabad- The New Indian Express. KOLKATA: Mauritius plans to connect Kolkata and Hyderabad when its airline gets permission to operate in more Indian cities. 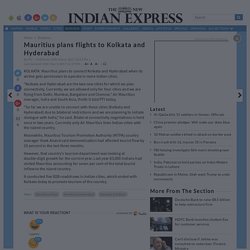 "Kolkata and Hyderabad are the two new cities for which we plan connectivity. Currently, we are allowed only for four cities and we are flying from Delhi, Mumbai, Bangalore and Chennai," Air Mauritius manager, India and South Asia, Vinith G told PTI today. "So far we are unable to connect with these cities (Kolkata and Hyderabad) due to bilateral restrictions and we are planning to initiate dialogue with India," he said.

Bilateral connectivity negotiations is held once in two years. Currently only Air Mauritius links Indian cities with the island country. Africa: Dar es Salaam Port Services Impress DR Congo. By Fatma Abdu Democratic Republic of Congo (DRC) has pledged to continue using Dar es Salaam port for imports and exports due to its safety and vicinity to their country. 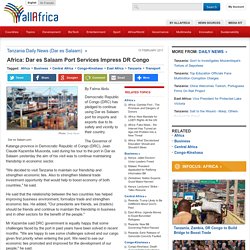 The Governor of Katanga province in Democratic Republic of Congo (DRC), Jean Claude Kazembe Musonda, said during his tour to the port in Dar es Salaam yesterday the aim of his visit was to continue maintaining friendship in economic sector. "We decided to visit Tanzania to maintain our friendship and strengthen economic ties. Also to strengthen bilateral trade investment opportunity that would help to boost economy of both countries," he said. He said that the relationship between the two countries has helped improving business environment, formalize trade and strengthen economic ties. Mr Kazembe said DRC government is equally happy that some challenges faced by the port in past years have been solved in recent months. Africa: Tanzania, Zambia, DR Congo to Build Bridge. Photo: The New Times Traders crossing a bridge to DR Congo (file photo). 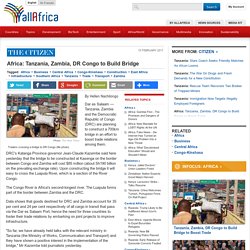 By Hellen Nachilongo Dar es Salaam — Tanzania, Zambia and the Democratic Republic of Congo (DRC) are planning to construct a 700km bridge in an effort to boost trade relations among them. DRC's Katanga Province governor Jean-Claude Kazembe said here yesterday that the bridge to be constructed at Kasenga on the border between Congo and Zambia will cost $85 million (about Sh190 billion on the prevailing exchange rate).

Upon constructing the bridge it will easy to cross the Luapula River, which is a section of the River Congo. The Congo River is Africa's second-longest river. Tanzania-Zambia ‘one stop center’ to boost cross-border trade. The newly established Tanzania and Zambia One Stop Border Post (OSBP) which is to start operation on February 1 at the Tunduma-Nakonde border will ease and boost trade between the two countries, senior officials said Sunday. 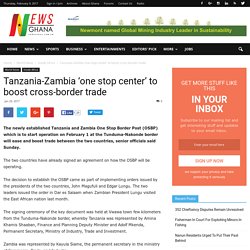 The two countries have already signed an agreement on how the OSBP will be operating. The decision to establish the OSBP came as part of implementing orders issued by the presidents of the two countries, John Magufuli and Edgar Lungu. The two leaders issued the order in Dar es Salaam when Zambian President Lungu visited the East African nation last month. The signing ceremony of the key document was held at Vwawa town few kilometers from the Tunduma-Nakonde border, whereby Tanzania was represented by Amina Khamis Shaaban, Finance and Planning Deputy Minister and Adolf Mkenda, Permanent Secretary, Ministry of Industry, Trade and Investment. 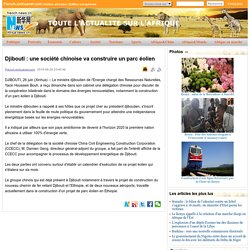 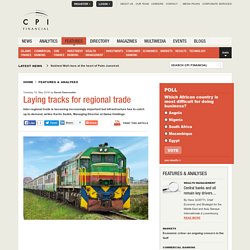 Expanding trade and building infrastructure to keep pace with the demands of young, growing populations are among the most pressing challenges at present. In 2015 Egypt’s trade with Africa accounted for less than five per cent of total trade and intra-African trade as a whole stood at only 12 per cent of the continent’s aggregate trade. Although an upward trend has started to emerge, there is still much that needs to be done. The Africa Union’s Agenda 2063 envisions a fully functional African common market with free movement of people, goods, capital and services. Djibouti is Jumping. This article was originally published by the Foreign Policy Research Institute in March 2016. 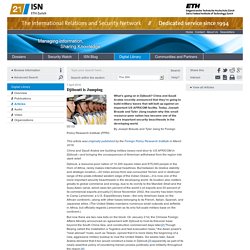 Djibouti Quietly Becoming A Key Player in Africa. PSIC Promo Video February 2016. In Djibouti: China to start work soon on naval base. Mauritius: Setting Up of a Mauritius Commodities Exchange. Traders in Southern Africa cross borders on buses to trade goods. Air Seychelles set for non-stop flights to China - CPAfrica. The Government of the Republic of Seychelles is delighted to announce that Air Seychelles is preparing for the launch of non-stop flights between its Mahé hub and the Chinese capital of Beijing in late January 2016. 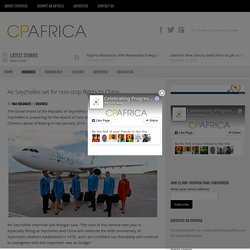 Air Seychelles chairman Joël Morgan said, “The start of this service next year is especially fitting as Seychelles and China will celebrate the 40th anniversary of diplomatic relations established in 1976, and I am confident our friendship will continue to strengthen with this important new air bridge.” China has become the sixth largest source of tourism in the island nation, with around 13,000 visitors recorded this year alone. With a dedicated flight service, Air Seychelles hopes to bring in more travellers. The minister also added that inaugurating this route could also provide options to operate in other major Chinese cities. Air Seychelles is currently 40% owned by Etihad Airways, the national airline of the United Arab Emirates.