Commercial banks in Zimbabwe to be compelled to accept livestock as collateral. Zimbabwe’s Trade and Development Bank to support manufacturing. German firm declines to print notes for Zimbabwe Reserve Bank. BREAKING: The Chinese Yuan Becomes Official Currency in Zimbabwe - How Africa News. This is another milestone set by Beijing to be in the court of the great powers, those whose currency refers. 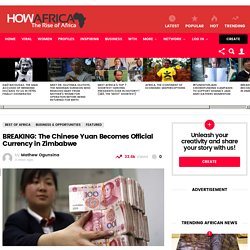 As of January 1, the yuan (or remimbi) rub shoulders with the US dollar, South African rand and the Botswana pula in the pockets of the people of Zimbabwe. It must be said that the situation in this country is special. He has no national currency since 2009. The failed land reform President-dictator Robert Mugabe has led to a severe economic crisis that the government tried to stop cranking printing money. Zimbabwe pays IMF arrears, first step to restoring lending. Zimbabwe: The Curious Case of the IMF's Decision to 'Lend' to Zimbabwe. Photo: Kudakwashe Hunda/The Herald From left, IMF 2016 Zimbabwe leader Domenico Fanizza, minister of finance Patrick Chinamasa and Reserve Bank governor John Mangudya at a press briefing in Harare. opinionBy David Mutori WHEN the government of Zimbabwe borrows money, they are borrowing it on behalf of you me, our children and our grandchildren. 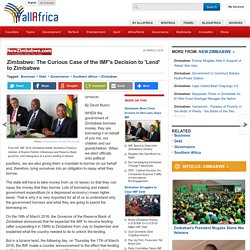 When we elect officials onto political positions, we are also giving them a mandate to borrow on our behalf and, therefore, tying ourselves into an obligation to repay what they borrow. This country has nine currencies - Feb. 29, 2016. That's a hard fact of life for many of Zimbabwe's businesses, who have been forced into the role of foreign exchange dealers after the country's dollar collapsed and was withdrawn from circulation. 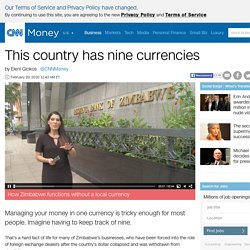 They'll trade in the U.S. dollar, Australian dollar, South African rand, Botswana pula, euro, British pound, Japanese yen, Chinese yuan and Indian rupee. "Most currencies are for trading purposes," Reserve Bank Governor John Mangudya told CNNMoney. "50% of our trade is with China and South Africa so we need to allow trading in many currencies. " Zimbabwe: Moody's Says Chinese Yuan Use May Benefit Zimbabwe, Sees Limitations. Moody's said on Thursday plans by Zimbabwe to increase the circulation of the Chinese yuan could lift investment from the world's second largest economy but may not be enough to strengthen investor confidence and improve competitiveness. 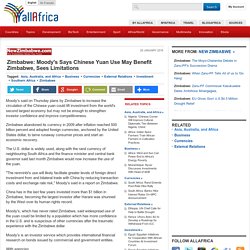 Zimbabwe abandoned its currency in 2009 after inflation reached 500 billion percent and adopted foreign currencies, anchored by the United States dollar, to tame runaway consumer prices and start an economic recovery. The U.S. dollar is widely used, along with the rand currency of neighbouring South Africa and the finance minister and central bank governor said last month Zimbabwe would now increase the use of the yuan. "The renminbi's use will likely facilitate greater levels of foreign direct investment from and bilateral trade with China by reducing transaction costs and exchange rate risk," Moody's said in a report on Zimbabwe.

With agencies. Zimbabwean ATMs run out of cash. ATM. 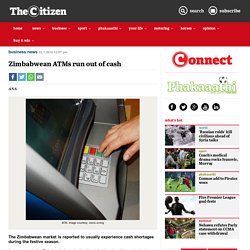 Image courtesy: stock.xchng A snap survey by the Zimbabwe Independent has found that there is a biting cash shortage which has forced banks to lower their daily automated teller machine (ATM) withdrawal limits from $3,000 to $800, the newspaper reported on Friday. The newspaper continued to report that some locally-owned banks had long suspended dispensing cash at most of their ATMs, with a government-owned bank going without ATM transactions since the festive season in an effort to manage the cash shortage. Zimbabweans give Chinese Yuan thumbs down. Call for Govt to fund Women’s Bank. Zimbabwe: Mnangagwa Goes for Yuan. Photo: Ding Haitao/Xinhua Wang Jiarui head of the International Department of the Communist Part of China Central Committee, meets with visiting Zimbabwean Vice President Emmerson Mnangagwa, in Beijing. 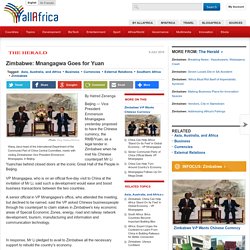 By Hatred Zenenga Beijing — Vice President Emmerson Mnangagwa yesterday proposed to have the Chinese currency, the RMB/Yuan, as a legal tender in Zimbabwe when he met his Chinese counterpart Mr Li Yuanchao behind closed doors at the iconic Great Hall of the People in Beijing. VP Mnangagwa, who is on an official five-day visit to China at the invitation of Mr Li, said such a development would ease and boost business transactions between the two countries. Zimbabwe Phasing Out Worthless Currency, Where 175 Quadrillion Zimbabwe Dollars Are Worth $5. As the value of Zimbabwe's currency diminishes to virtually nothing, people in the country will start to exchange local dollars for U.S. ones Monday, gradually putting an official and legal end to the old currency, Zimbabwe's central bank announced Thursday. 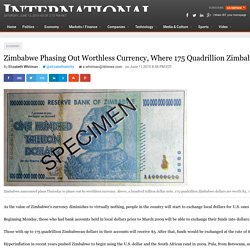 For 175 quadrillion Zimbabwean dollars, locals will be able to get $5. Eventually, Zimbabwean dollars will be sold as souvenirs, Reuters reported. Beginning Monday, those who had bank accounts held in local dollars prior to March 2009 will be able to exchange their funds into dollars. They’ll have until September to make those conversions. Those with up to 175 quadrillion Zimbabwean dollars in their accounts will receive $5. Dollarisation: Why Zimbabwe may have gone through the door of no return. THIS month marks six years since Zimbabwe adopted the multi-currency monetary system, popularly referred to as dollarisation, in response to the chaotic hyperinflationary period that had defined the country’s economy for almost a decade prior to February 2009. 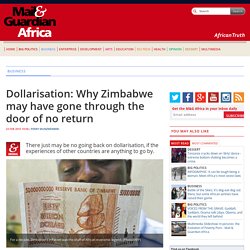 Most Zimbabweans are still haunted by the memories of that era when their legal tender, the Zimbabwe dollar, effectively lost its usefulness as a medium of exchange, store of value, unit of account and means for deferred payments—considered features that give any monetary currency its value. Looking back in history, it is interesting to note that there has not been any economy that has reverted back to its local currency once it has dollarised. Microfinance lending grows by 80% Investors ignore risk on Zimbabwe's bourse. Johannesburg - Zimbabwe's stock market has fallen so far from last year's peak that some investors are stepping back in to scoop up consumer-oriented African growth plays. 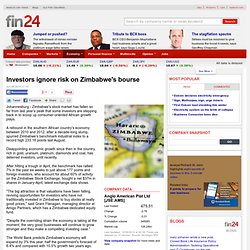 A rebound in the southern African country's economy between 2010 and 2012, after a decade-long slump, spurred Zimbabwe's benchmark industrial index to a record high 233.18 points last August. Russians take over Zimbabwean Bank. Zimbabwe Bill to Limit Institutions to Owning 25% of Banks. Zimbabwe has drafted a law that will prevent institutions from owning more than 25 percent of a bank without authorization from the southern African nation’s finance minister. 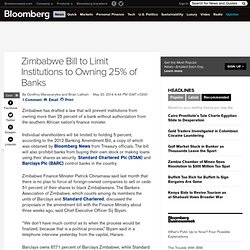 Individual shareholders will be limited to holding 5 percent, according to the 2012 Banking Amendment Bill, a copy of which was obtained by Bloomberg News from Treasury officials. The bill will also prohibit banks from buying their own stock or making loans using their shares as security. Standard Chartered Plc (STAN) and Barclays Plc (BARC) control banks in the country. Foreign inflows soar on Zimbabwe Stock Exchange. January 7th, 2014 by Tom Minney Foreign inflows on the Zimbabwe Stock Exchange rose by close to 40% in 2013, with more coming in the second half. According to an article in the Zimbabwe Herald newspaper, over the year foreign investors bought $291.0m worth of shares and sold $194.7m, compared to $211.6m of purchases and $152.8m of sales in 2012.

The government-owned newspaper reports that August 2013, immediately after the 31 July elections, saw an inflow of $33.3m. The main driver of foreign investment is the dollarization introduced by Finance Minister Patrick Chinamasa in early 2009. According to data from the ZSE, a total of $485.8m worth of shares were traded in 2013 (more in the second half), up 8.4% on 2012 and also more than 2011 and 2010. Zimbabwe to open a 'blacks only' stock exchange. Zimbabwe Stock Exchange Plans IPO as Index Rallies 38% Zimbabwe ’s stock exchange, whose main industrial index has jumped 38 percent this year, plans to sell shares through an initial public offering by the end of 2013, according to the country’s Securities Exchange Commission.

The market value of shares listed on the bourse may nearly double to $10 billion from the current $5.4 billion over the next 12 months as it plans to start automated trading to attract more investors, Chief Executive Officer Tafadzwa Chinamo said in an interview in Lusaka, the capital of neighboring Zambia , where he spoke at a capital markets conference. An IPO might value the ZSE at $15 million to $20 million, he said. Zimbabwe’s plans come as African bourses record some of the highest growth rates in the world this year. The Ghana Stock Exchange, which began automated trading in 2009, has seen its composite index rally a global-best 47 percent. Nigerian and Kenyan markets are among the top 10 best performers, according to data compiled by Bloomberg. Zimbabwe’s Econet launches debit card and POS terminals. Zimbabwe: Mobile Money Transfers - Country Drifts Towards Cashless Economy. ZIMBABWE's financial transacting public has been presented with a plethora of money transfer options, as the country moves towards a cashless economy.

Mobile money products on the market include; Kingdom CellCard, ZB Bank's e-Wallet and e-Mali, Econet's EcoCash product, as well as CABS' TextaCash. FBC has joined the bandwagon with Mobile Moola, a new Automated Teller Machine (ATM) card from which one can send money to anyone with a mobile phone on any network.