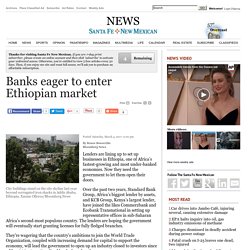 Now they need the government to let them open their doors. Over the past two years, Standard Bank Group, Africa’s biggest lender by assets, and KCB Group, Kenya’s largest lender, have joined the likes Commerzbank and Ecobank Transnational in setting up representative offices in sub-Saharan Africa’s second-most populous country. The lenders are hoping the government will eventually start granting licenses for fully fledged branches.

An online service is needed to view this article in its entirety. Need an account? Ethiopia earns $123m from electricity sales - Africa Review. ANDUALEM SISAY in Addis Ababa Wednesday, April 13 2016 at 13:19 comment Ethiopian earned $123 million (2.6 billion birr) in the first eight months of 2015/16 budget year from the sale of electricity locally and abroad, an official said. 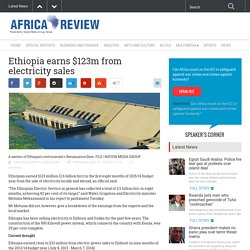 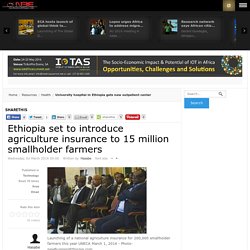 The national level vegetation index based crop insurance aims to insure the farmer against weather related risks. Labeled Normalized Difference Vegetation Index (NDVI), the new insurance uses a long standing index used by national and international agencies to monitor the occurrence of drought. “Ethiopian Insurance Corporation contemplates to promote and venture into rural micro insurance products in order to provide safety nets for low income and sections of the population in Ethiopia.

“So far these smallholder farmers, mainly engaged in rain-fed agriculture, were exposed to weather variation risks. Partners launch prepaid shopping card in Ethiopia. To boost the number of people in Ethiopia who use electronic payment systems, a technology firm and a local bank have introduced merchant loyalty prepaid shopping electronic card system. 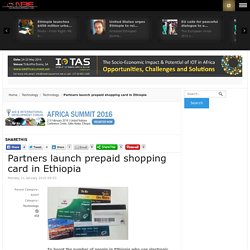 The new program to the country plans to enable merchants to get various benefit packages from major traders in the country. Fettan Limited, a United States based technology firm which has been operating in Ethiopia for several years has announced that it has partnered with Wegagen Bank Share Company of Ethiopia and introduced loyal customers card for Oil Libya and Shoa Supermarket and Great Abyssinia customers, among others.

“By introducing this program, we are building sustainable demand and supply-based ecosystems, which allow the customers to use electronic payment,” Yemiru Chanyalew, CEO of Fettan Limited told NATION Correspondent in Addis Ababa. “If we see the use of electronic card in Ethiopia, it doesn’t exceed more than 40% on average. Illicit outflows eating 5-10pc of Ethiopia's GDP - Business and Finance. ANDUALEM SISAY in Addis Ababa Thursday, December 31 2015 at 10:57 comment Illicit financial outflows are eating as much as 5 to 10 per cent of Ethiopia’s GDP, according to the country’s Customs and Revenue Authority (ECRA). 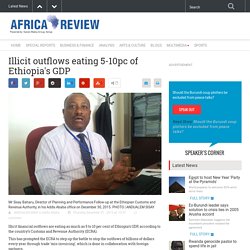 This has prompted the ECRA to step up the battle to stop the outflows of billions of dollars every year through trade ‘mis-invoicing’, which is done in collaboration with foreign partners. “As from last year, we are working hard to combat the practice, especially the under-invoicing by importers and local traders,” said Sisay Baharu, an official with the Ethiopian Customs and Revenue Authority (ECRA). A report by Global Financial Intelligence (GFI) states that close to two billion US dollars is leaving the country every year through trade under-invoicing. “In collaboration with Indian customs and excise, last year we replaced the old system and established a new customs database, which is linked to global price makers and updates itself automatically,” said Mr Sisay.

Interview: The State Of Private Equity In Ethiopia. From HowWeMadeItInAfrica In 2008 Schulze Global Investments (SGI), an American investment firm and family office, became the first international private equity firm to open an office in Ethiopia. 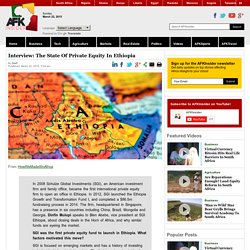 In 2012, SGI launched the Ethiopia Growth and Transformation Fund I, and completed a $86.5m fundraising process in 2014. The firm, headquartered in Singapore, has a presence in six countries including China, Brazil, Mongolia and Georgia. Ethiopia: The Banking Boom. By Brook Abdu Fortune Year shows Growth and Apprehension for Private Banks in Ethiopia The last fiscal year had been one of growth and expansion for Ethiopia's banking sector, though still dominated by the state owned Commercial Bank of Ethiopia (CBE) and although most of the private banks still face the challenge of meeting a paid-up capital minimum of 500 million Br by 2016, according to a decree by the central bank. 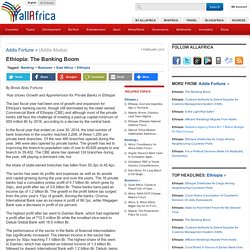 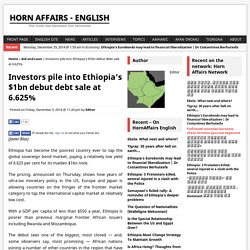 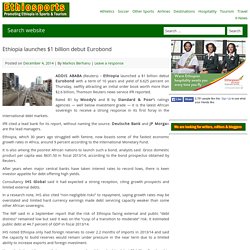 Rated B1 by Moody’s and B by Standard & Poor’s ratings agencies — well below investment grade — it is the latest African sovereign to receive a strong response in its first foray in the international debt markets. Ethiopia: New banking window aims to support SMEs transition to larger companies: MFW4A - Making Finance Work for Africa. The Development Bank of Ethiopia (DBE) has announced that it is about to launch a new financing window dedicated to small and medium-sized enterprises (SMEs) transitioning to a larger size. 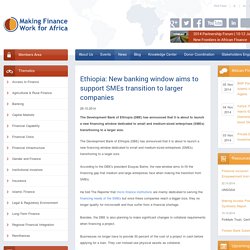 According to the DBE's president Esayas Bahre, the new window aims to fill the financing gap that medium and large enterprises face when making the transition from SMEs. He told The Reporter that micro finance institutions are mainly dedicated to serving the financing needs of the SMEs but once these companies reach a bigger size, they no longer qualify for microcredit and thus suffer from a financial shortage. Besides, the DBE is also planning to make significant changes in collateral requirements when financing a project. Ethiopia's banks selects BPC Smartvista for national switching operations. BPC Banking Technologies, the leading provider of Open System payment solutions, announces that EthSwitch has chosen SmartVista to power its national switching operations in Ethiopia. SmartVista was selected because of its comprehensive functionality, advanced technology and proven track record in helping payment businesses worldwide capitalize on opportunities presented by the changing payments landscape.

The bank will offer the service to individual customers as well as to companies. The new system operates on any device that is able to support an internet browser and makes use of anti hacking and anti E-theft systems building up on the experience of Asian and European banks said Solomon Mengesha, Assistant Vice President of Information Systems with CBE. The internet banking system put in place by the commercial bank also has strict customer authentication methods as well as building a significant Information Technology architecture according to Solomon.

Debub Global Bank, Ethiopia to begin Operations. Debub Global Bank is set to enter the banking sector in Ethiopia as the 15th private bank after receiving a license from the National bank and a trade permit from the Addis Ababa Trade Bureau at the end of the month. The bank expects to launch operations in July with two branches in Addis Ababa and one each in Hosanna and Hawassa according to Workku Lemma President of Debub. It is currently in the process of setting up offices, seeking companies to provide IT services and CORE banking solutions in particular as well as hiring staff. The bank will require a commencement letter from the central bank which will conduct a field inspection to affirm that it is ready to begin operations. The bank held its first shareholders meeting in September of 2010 after raising 266 million birr in capital from 5,481 shareholders and submitted its nominees for the board of directors to the central bank a couple of months later.