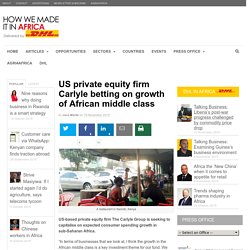 “In terms of businesses that we look at, I think the growth in the African middle class is a key investment theme for our fund. We like businesses that touch the consumer,” says Bruce Steen, senior associate at Carlyle advising on pan-African buyout opportunities. He was speaking during a panel discussion at the recent EY Strategic Growth Forum Africa in Johannesburg. “We are looking for businesses which are going to benefit from higher GDP per capita, increasing levels of urbanisation, and ultimately this demographic dividend which will occur when the young population matures and ultimately moves into the workforce and becomes consumers.” 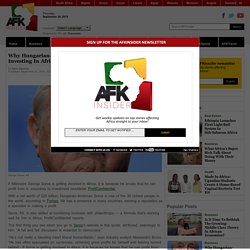 With a net worth of $26 billion, Hungarian-American Soros is one of the 30 richest people in the world, according to Forbes. He has a presence in many countries, earning a reputation as a specialist in making a profit. Soros, 85, is also skilled at combining business with philanthropy — a formula that’s working well for him in Africa, ProfitConfidential reports. 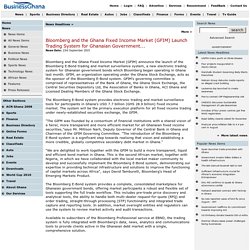 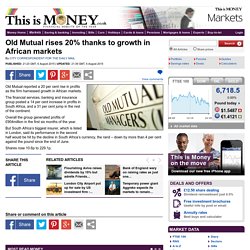 The financial services, banking and insurance group posted a 14 per cent increase in profits in South Africa, and a 31 per cent jump in the rest of the continent. Overall the group generated profits of £904million in the first six months of the year. U.S. fund managers tapping into African beer market. New York Pension Fund to Invest Billions in Africa. MasterCard passe le cap des 100 millions de cartes en Afrique et Moyen-Orient. Mastercard plans Sh1bn lab in Nairobi, braces for war against Visa - Business. Mastercard plans to set up its Sh1bn African research lab in Nairobi later this year, showing its rising interest in the regions payments market. 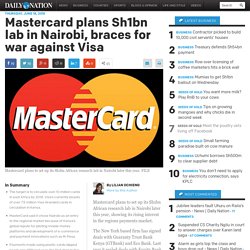 The New York based firm has signed deals with Guaranty Trust Bank Kenya (GTBank) and Eco Bank. Last year it sealed deals with Equity Bank and Kenya Commercial Bank, a move that is seen as a warm up ahead of its Sh1 billion research lab. Citigroup Sees Window for African Borrowers Before Fed Rate Rise. A window has opened for African countries from Senegal to South Africa to lock in low borrowing costs by selling Eurobonds before the U.S. raises interest rates, according to Standard Bank Group Ltd. and Citigroup Inc. 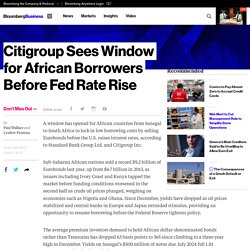 Sub-Saharan African nations sold a record $9.2 billion of Eurobonds last year, up from $6.7 billion in 2013, as issuers including Ivory Coast and Kenya tapped the market before funding conditions worsened in the second half as crude oil prices plunged, weighing on economies such as Nigeria and Ghana. Since December, yields have dropped as oil prices stabilized and central banks in Europe and Japan extended stimulus, providing an opportunity to resume borrowing before the Federal Reserve tightens policy. The average premium investors demand to hold African dollar-denominated bonds rather than Treasuries has dropped 63 basis points to 365 since climbing to a three-year high in December. Debt Demand Young Population ‘Low Base’ MasterCard launches initiative for poorer East Africans - EmergingMarkets.me. By Andrei Skvarsky. 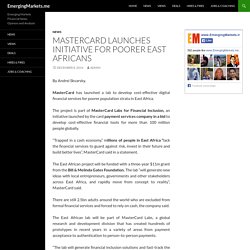 “Trapped in a cash economy,” millions of people in East Africa “lack the financial services to guard against risk, invest in their future and build better lives”, MasterCard said in a statement. The East African project will be funded with a three-year $11m grant from the Bill & Melinda Gates Foundation. The lab “will generate new ideas with local entrepreneurs, governments and other stakeholders across East Africa, and rapidly move from concept to reality”, MasterCard said. There are still 2.5bn adults around the world who are excluded from formal financial services and forced to rely on cash, the company said. Kenya: Bill Gates Offers MasterCard $11m To Grow Financial Inclusion In Kenya. 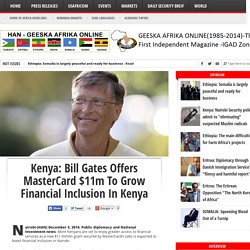 Public diplomacy and National Investment news. More Kenyans are set to enjoy greater access to financial services as a new $11 million grant secured by MasterCard’s Labs is expected to boost financial inclusion in Nairobi. The Bill & Melinda Gates Foundation is offering the endowment to support the new MasterCard banking program aimed at providing credit in East Africa. Through the grant over three years, the lab will generate new ideas with local entrepreneurs, governments and other stakeholders across East Africa, and rapidly move from concept to reality. “Too many people lack access to the most basic financial services, leaving them trapped in a cash economy that imposes greater risks and costs on those least able to afford them,” said Ajay Banga, president and CEO at MasterCard. MasterCard says the grant from the Gates Foundation will fund new markets entry, which may have been commercially too expensive. 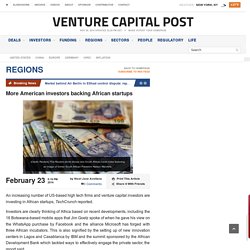 Investors are clearly thinking of Africa based on recent developments, including the 16 Botswana-based mobile apps that Jim Goetz spoke of when he gave his view on the WhatsApp purchase by Facebook and the alliance Microsoft has forged with three African incubators. This is also signified by the setting up of new innovation centers in Lagos and Casablanca by IBM and the summit sponsored by the African Development Bank which tackled ways to effectively engage the private sector, the report said. U.S. Proposes Major Debt Relief for Ebola-Hit Countries. By Carey L. 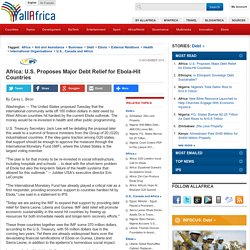 Biron Washington — The United States proposed Tuesday that the international community write off 100 million dollars in debt owed by West African countries hit hardest by the current Ebola outbreak. MasterCard and Visa look to woo Africa’s unbanked. Western Union, Angola Post Office Join to Expand in Africa - September 22, 2014. World’s leading money transfer company Western Union Co. (WU - Analyst Report) announced that it has tied up with the Angola Post Office, which provides postal and financial services in South Africa. Angola post will act as an agent for Western Union, which intends to provide its money transfer services in the country. Western Union has tied up with the post office since the latter will provide a ready customer base.

Visa pushing for electronic payments in sub-Saharan Africa. In most of sub-Saharan Africa cash dominates the payment system and only a small percentage of the population enjoy the convenience of online, card-based, and mobile payments. In Kenya, for instance, it is common for consumers to withdraw money from an ATM or mobile money agent, then walk into a supermarket to make payment in cash. Jabu Basopo Jabu Basopo, general manager for Southern and East Africa at payments technology company Visa Inc, says there is a need to create awareness among consumers and merchants on the benefits of electronic payments.

“It is important to educate everyone, especially shop owners who have the responsibility of taking cards. In Europe when you go to a cashier the first payment option they offer you is card. Carlyle Collects $698 Million for First Sub-Saharan Africa Fund. Carlyle Group LP (CG:US), the world’s second-largest manager of alternative assets such as private equity and real estate, raised $698 million for its first fund targeting investments in sub-Saharan Africa. The final amount was 40 percent above the $500 million targeted by Washington-based Carlyle for the strategy, according to Catherine Armstrong, a spokeswoman. The firm started a team based in Johannesburg and Lagos, Nigeria, in 2011, headed by Marlon Chigwende and Daniel Jordaan.

Jordaan stepped back from his role earlier this year and became a senior adviser. US insurance firm gets nod to establish centre in Morocco. US insurance corporation, AIG, is all set to launch its office in Morocco. (Image source: David Hilowitz/Flickr)American International Group (AIG), one of the largest underwriter of commercial and industrial insurance in the US, has received approval for the establishment of a servicing office in Morocco According to the company, the new centre in Casablanca Finance City (CFC), will support the strategic growth and expansion of its insurance business across North and West Africa. CFC serves as Morocco’s finance centre and an African hub for the development of business across the region, with a particular focus on financial services. Michael Whitwell, president for Middle East and Africa, AIG, said, “AIG’s commitment to Africa dates back over 50 years. Startup Stock Exchange Opens On June 10 To Help African Startups Sell Shares To Investors.

Startups looking to raise money from global investors by selling ownership shares in their companies can now do so through the Startup Stock Exchange, a regulated global public marketplace for startup investing pre-launched last July. The world’s first online stock exchange for startup investing and funding will open its marketplace on June 10, 2013 allowing shares in startup companies to trade freely on the exchange and investors of any level to buy ownership shares of vetted startup companies.

Already, two IPOs are expected to launch next week Monday on the exchange, which also allows anyone to become an Angel Investor using their online brokerage account to purchase any amount of shares in any startup company of their choice. “We are committed to provide a secure and transparent trading environment. I believe SSX will democratize the marketplace, opening opportunity to startups, early stage businesses and emerging companies,” said CEO Ian Haet.

Backed By Google And eBay's Founder, Crowd Funding Takes Off In Africa. M:lab is part of Nairobi's iHub, an open innovation space used by tech companies and investors and backed by, among others, Google and Omidyar Network, the investment firm created by Pierre Omidyar, the billionaire founder of eBay. Now It has teamed up with international crowd funding platform GrowVC to raise money from online supporters for its budding mobile app developers. M:lab hopes crowd funding will help its startups scale up into sustainable businesses. That is sorely needed; today even the region's best ideas can wither on the vine because bank loans and venture capital are hard to come by in East Africa. African banks lose out to US rivals on cross-border flows. A WHITE paper by Swift, the global financial messaging provider, says that African banks are losing market share even as trade volumes grow on the continent, because US dollar clearing banks have increased their dominance over cross-border transaction flows during the past decade.

The dollar remains the major trade currency in Africa, but a shift to other currencies such as the Chinese renminbi and Brazilian real is likely as regional groups and central banks push for more local currency transaction settlements. UBS Targets African Wealthy as Credit Suisse Takes Step Back. UBS AG (UBSN), the world’s biggest wealth manager, is targeting millionaire clients in oil-rich Nigeria and Angola as Swiss rival Credit Suisse Group AG (CSGN) withdraws from some African markets. “The amount of people on the continent that fall within our wealth-management bracket is increasing every day,” Sean Bennett, the Johannesburg-based managing director of UBS in sub-Saharan Africa, said in a Nov. 20 interview.

In her new role, Keisha will be tasked with expanding MasterCard’s business in Anglophone West Africa, a region of five countries, namely: Nigeria, Ghana, The Gambia, Sierra Leone and Liberia. In addition to expanding the business in West Africa, Keisha will also oversee the growth of MasterCard’s scope of products and number of customers, at a time when many governments in the region are highlighting the vices and cost of cash, thereby ensuring increased opportunities for the technology company in the payments industry, a statement by the firm on Sunday indicated.