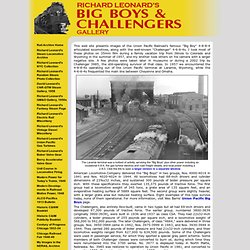 I took most of these photos on 35mm film during a family vacation trip from Illinois to Colorado and Wyoming in the summer of 1957, and my brother took others on his camera with a larger negative size. A few photos were taken later in museums or during a 2002 trip by Challenger 3985, the still-operating survivor of that class. In 1957 we encountered the 4-8-8-4s operating out of the Union Pacific terminal at Laramie, Wyoming, while the 4-6-6-4s frequented the main line between Cheyenne and Omaha. The Laramie terminal was a hotbed of activity, servicing the "Big Boys" plus other power including anoccasional 4-8-4, the gas turbine electrics and road freight diesels, and local power including a2-8-0. Click this link to open a larger version in a separate window. Dampf-Lokomotiven in USA - der Big Boy u.a. Für die schweren Last- und Kohlezüge auf den Gebirgs-Strecken in den Rocky Mountains, nach Vorgaben der Union Pacific, entstand ein Koloss auf Rädern: 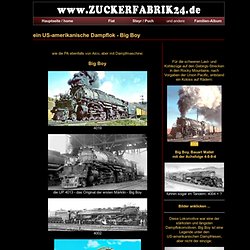 Big Boy 4023 Omaha. Big Boy 4023 is Getting Ready to Move to it's New Home in Omaha Photos by John Bush and Mike Connor 100 ton capacity crane in place to position beams alongside loco for placement on road axles. 4023's tender raised as preparations continue for placement of road wheel assemblies beneath beams. 4023 raised approx. 24" by simultaneous-pressure hydraulic jacks, operated in unison from power "manifold. 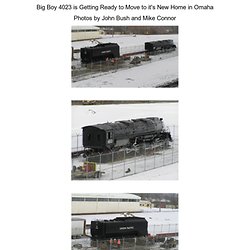 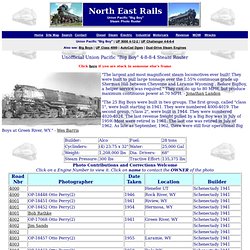 They were built to pull large tonnage over the 1.55% continuous grade up Sherman Hill between Cheyenne and Laramie Wyoming . Before BigBoy, a helper service was required. " They can do up to 80 MPH, but produce maximum continuous power at 70 MPH. - Jonathan Landon. Big Boy Main Page. Starting in 1941, Alco Locomotive Works built 25 of the biggest locomotives that ever lived. 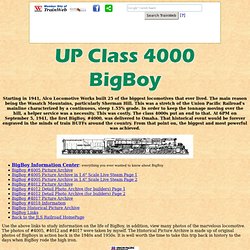 The main reason being the Wasatch Mountains, particularly Sherman Hill. This was a stretch of the Union Pacific Railroad's mainline characterized by a continuous, steep 1.55% grade. In order to keep the tonnage moving over the hill, a helper service was a necessity. This was costly. The class 4000s put an end to that. Use the above links to study information on the life of BigBoy, in addition, view many photos of the marvelous locomotive. This site was created by Jonathan Landon, if you have any questions or comments, click here to contact me. Big Boy Historical Pictures.

BigBoy Information Center. Everything you EVER wanted to know about BigBoy Below is an active schematic of BigBoy. 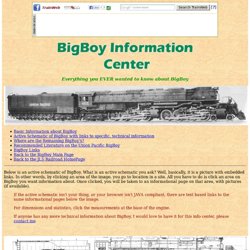 What is an active schematic you ask? Well, basically, it is a picture with embedded links. In other words, by clicking an area of the image, you go to location in a site. All you have to do is click an area on BigBoy you want information about. If the active schematic isn't your thing, or your browser isn't JAVA compliant, there are text based links to the same informational pages below the image. Basic Information on the Union Pacific BigBoy........ BigBoy, the largest successful engine ever created, was not only a technological achievement and trophy piece, rather a necessity for the Union Pacific Railroad. Alco Locomotive Works was commissioned to build the engine. BigBoy served as king of the hill for 21 years! The day came that all steam BUFFs refused to accept, September 4th, 1957, not a single BigBoy was dispatched west out of the Cheyenne yards. 8 survive today.

4-8-8-4 "Big Boy" Locomotives. During the late 1930s, the Union Pacific often used helpers to move trains from Ogden to Wahsatch. 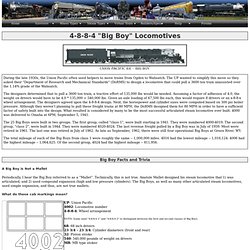 The UP wanted to simplify this move so they asked their "Department of Research and Mechanical Standards" (DoRMS) to design a locomotive that could pull a 3600 ton train unassisted over the 1.14% grade of the Wahsatch. The designers determined that to pull a 3600 ton train, a tractive effort of 135,000 lbs would be needed. Assuming a factor of adhesion of 4.0, the weight on drivers would have to be 4.0 * 135,000 = 540,000 lbs. Photo Gallery Page 14.