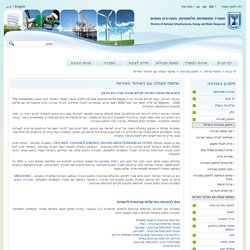 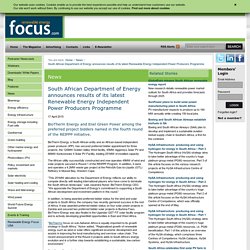 The African utility successfully constructed and now operates 49MW of wind and solar projects secured in Round 1 of the REIPPP Program. In addition, it owns and operates a 4.2MW waste gas project at the PetroSA Gas-to-Liquids (GTL) Refinery in Mossel Bay, Western Cape. “This 251MW allocation by the Department of Energy reflects our ability to compete directly with leading international players who have come to dominate the South African landscape,” said Jasandra Nyker, BioTherm Energy CEO. Texas city opts for 100% renewable energy – to save cash, not the planet. News that a Texas city is to be powered by 100% renewable energy sparked surprise in an oil-obsessed, Republican-dominated state where fossil fuels are king and climate change activists were described as “the equivalent of the flat-earthers” by US senator and GOP presidential hopeful Ted Cruz.

This city in Texas, USA is going 100% renewable energy in the form of wind and solar. Their decision is based on ECONOMICS. They found it to be cheaper to depend on solar and wind than traditional power. One reason for sustainability is protection against fluctuations in the price of fossil fuels. Another minor reason is that renewable energy also requires much less water to produce than traditional power generation. – ofer2

“I was called an Al Gore clone, a tree-hugger,” says Jim Briggs, interim city manager of Georgetown, a community of about 50,000 people some 25 miles north of Austin. 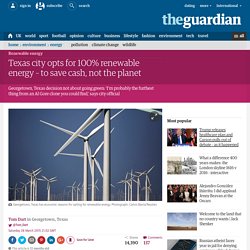 Briggs, who was a key player in Georgetown’s decision to become the first city in the Lone Star State to be powered by 100% renewable energy, has worked for the city for 30 years. He wears a belt with shiny silver decorations and a gold ring with a lone star motif, and is keen to point out that he is not some kind of California-style eco-warrior with a liberal agenda. In fact, he is a staunchly Texan pragmatist. “I’m probably the furthest thing from an Al Gore clone you could find,” he says.

“Sun will, though. A Town Saves Money with Renewable Energy (read comment) Scituate is the first town in Massachusetts to power all of its government services using only renewable energy. 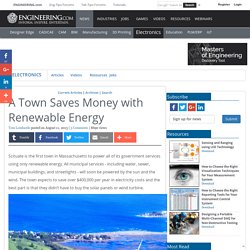 All municipal services - including water, sewer, municipal buildings, and streetlights - will soon be powered by the sun and the wind. The town expects to save over $400,000 per year in electricity costs and the best part is that they didn’t have to buy the solar panels or wind turbine. Cedar Hill, TX - (read comment) In July 2011, the City completed installation of a Solar PV system on top of the Government Center building with grant funding in the amount of $950,000.

This project's goal was to harness the energy received by the Earth from the Sun with a system totaling 152.64 kilowatts. 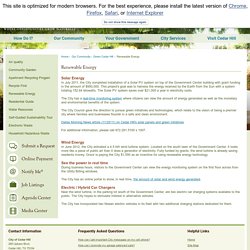 The Solar PV system saves over $21,000 a year in electricity costs. The City has a real-time monitoring system where citizens can view the amount of energy generated as well as the monetary and environmental benefits of the system. The City Council gave the direction to pursue green initiatives and technologies, which relate to the vision of being a premier city where families and businesses flourish in a safe and clean environment. 100% Renewable Electricity Goal Passed By Hawaiian Legislature. Clean Power Published on May 7th, 2015 | by Jake Richardson May 7th, 2015 by Jake Richardson The Hawaiian legislature just passed a new bill to set a goal to get 100% of its electricity from renewable energy sources in the state by 2045.

This demonstrates how we are beginning to shift economically. Now, renewable energies are getting to the point that they are sometimes more affordable than traditional energy sources. – ofer2 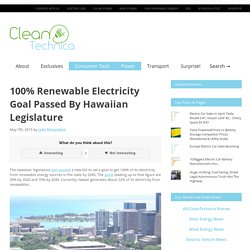 Currently, Hawaii generates about 22% of its electricity from renewables. “Local renewable projects are already cheaper than liquid natural gas and oil, and our progress toward meeting our renewable energy standards has already saved local residents hundreds of millions on their electric bills. “Passage of this measure is a historic step towards a fossil fuel free Hawaii. The governor, David Ige, still needs to sign the legislation to make it active. “Hawaii can be a bright spot—a story of hope for environmental stewardship around the world, Our islands will be some of the first to be deeply affected by climate change, and we have an opportunity today to take the lead for the nation. How to be 100% renewable - handbook. Go 100% Renewable Energy : Welcome. Municipal waste to biogas. European politicians across party lines call for long-term 100% target for renewable energy — World Future Council.

Fiona Hall, MEP and Member of the Alliance of Liberals and Democrats for Europe: “Europe must scale up its renewables share to ensure economic prosperity, industrial competitiveness and democratic stability.” 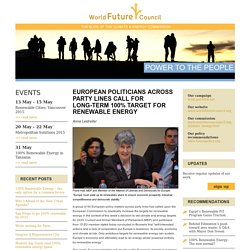 A group of 50 European policy makers across party lines has called upon the European Commission to drastically increase the targets for renewable energy in the context of this week’s decision to set climate and energy targets for 2030. How to Develop a BEI (Baseline Emissions Inventory) SEAP (Sustainable Energy Action Plan) in Southern Med. Partner Countries. Reduce Utility Bills for Municipal Facilities and Operations. Skip to main navigation Local Action Overview (Municipal Operations) 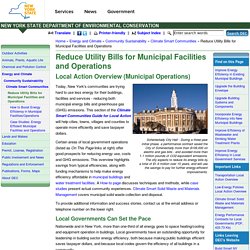 14 Israel Water Sector Water Saving. Stormwater Harvesting Systems, Custom Rainwater & Greywater System Design. Practiced for thousands of years across almost all cultures, the process of capturing and reusing rainwater and greywater (from showers and sinks) for non-potable use is fast becoming an important cornerstone for new sustainable practices in the U.S. 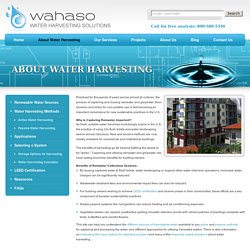 Why is Capturing Rainwater Important? As fresh, potable water becomes increasingly scarce in the U.S., the practice of using it to flush toilets and water landscaping seems almost ridiculous. Water Efficiency Strategies. Efficiency versus Conservation: What's the Difference? 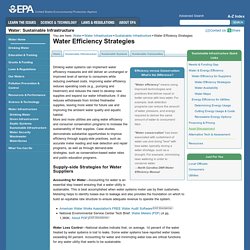 "Water efficiency" means using improved technologies and practices that deliver equal or better service with less water. For example, leak detection programs can reduce the amount of water, pressure, and energy required to deliver the same amount of water to consumers' taps. "Water conservation" has been associated with curtailment of water use and doing "less" with less water, typically during a water shortage, such as a drought.

The Gresham Waste-water Treatment Plant in Oregon, US, missed an important anniversary in January 2011. That was when the utility had expected its six-year old CHP system to have paid back its cost and to start turning a profit. There was no celebration, but no disappointment either, because the system actually hit that break-even date about 19 months earlier, in May of 2009. But this is more than a financial success story. The city's planners took some of their first steps on the path to sustainability in the late 1980s, with the commissioning of a biogas-fuelled CHP system at the wastewater treatment plant. Unfortunately, by 2003 the corrosive nature of biogas had taken its toll. CT WTE Economic Benefits.

The most tangible benefit seems to be the increase in local jobs which in turn will boost the local economy. It is unclear what the cost verses income numbers would work out to be, or how long it would take to reap the benefits of the investment. – ofer2

Economic Development Benefits of Waste. SMALL SCALE WASTE-TO-ENERGY TECHNOLOGIES (thesis) 2G CENERGY. Energy Recovery from Waste. Energy recovery from waste is the conversion of non-recyclable waste materials into useable heat, electricity, or fuel through a variety of processes, including combustion, gasification, pyrolization, anaerobic digestion, and landfill gas (LFG) recovery. RTI International - MSW Decision Support Tool. Economic_Benefits_WTE_WP.pdf. Alternative Energy Resources, News, eMagazine & Library. Energy Recovery Services by Chinook Energy LLC. 2014-Update-of-Potential-for-Energy-Recovery-from-Municipal-Solid-Waste-and-Non-Recycled-Plastics.pdf. Biomass Heating: a guide to medium scale wood chip and wood pellet systems. What is cogeneration? The principleCogeneration (Combined Heat and Power or CHP) is the simultaneous production of electricity and heat, both of which are used. The central and most fundamental principle of cogeneration is that, in order to maximise the many benefits that arise from it, systems should be based on the heat demand of the application.

This can be an individual building, an industrial factory or a town/city served by district heat/cooling. Through the utilisation of the heat, the efficiency of a cogeneration plant can reach 90% or more. Biomass Magazine - The Latest News on Biomass Power, Fuels and Chemical. CHPA: combined heat and power, district heating and cooling & energy services.

Welcome to the website of the BIOMASS Energy Centre. What is biomass? Biomass is biological material derived from living, or recently living organisms. In the context of biomass for energy this is often used to mean plant based material, but biomass can equally apply to both animal and vegetable derived material. (more …) Why use biomass? Biomass is a renewable, low carbon fuel that is already widely available throughout the UK. Renewable Energy Toolkit. Biomass Boiler and Component Products - Treco. Biomass Boilers. Energy solutions based on biomass and bio-fuels provide clean and renewable energy for large national and international companies. Green-thinking companies are now using biofuels to mitigate the impact their activities have on the environment by reducing emissions of greenhouse gases. This can also generate earnings for your company by saving money on energy costs, and by the sale of carbon credits.

Achieve energy independence, get off the Gas Grid, and no longer be at the mercy of the oil markets.