MacGyver. The show follows secret agent Angus MacGyver, played by Richard Dean Anderson, who works as a troubleshooter for the fictional Phoenix Foundation in Los Angeles and as an agent for a fictional United States government agency, the Department of External Services (DXS). Educated as a scientist, MacGyver served as a Bomb Team Technician/EOD during the Vietnam War ("Countdown"). Resourceful and possessed of an encyclopedic knowledge of the physical sciences, he solves complex problems with everyday materials he finds at hand, along with his ever-present duct tape and Swiss Army knife.

He prefers non-violent resolutions and prefers not to handle a gun, but will if necessary. MacGyver has used guns in the series, including an AK47 (actually a mocked up Valmet M71S), a Smith and Wesson .357 (used with the cylinder removed as a wrench), and a Berreta 92f (while amnesiac thus forgetting his aversion to guns).[1] Series overview[edit] Format[edit] Cast[edit] MacGyver's family is rarely seen. MacGyver Online: MacGyverisms. 001 PILOT (untitled) - Disarmed missile with a paper clip - Matches, string & rifle made timed diversion - Smashed flare-launcher barrel used as rocket thruster - Lit cigarette with hidden laser - Used Cigerette smoke to see laser - Mirror from binoculars reflected laser to 'sting' itself - Raised fallen I-beam with knotted fire hose filled with water - Tested heat on door with a stick (it caught fire) - Pulled wires out of control panel and joined together to start fans in gas chamber. 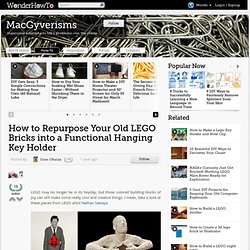 I mean, take a look at these pieces from LEGO artist Nathan Sawaya. While making something like that is undoubtedly impressive, it could be just a little too difficult for the common LEGO enthusiast—and expensive (LEGOs aren't cheap these days). So, for the regular LEGO-builders, usefulness is more important that extravagance. Like this handy LEGO key holder from Felix Grauer. As you can see, it's a lot less complicated to make than the above LEGO sculptures, and practically any person with keys can find it nice to have hanging by their front door.

How to Make the LEGO Key Hub To make your own LEGO key holder, just head down to your basement (or wherever you keep your LEGOs) and dig out your old blocks. Don't have any? Pieces for the Word "KEYS! " LEGO Base Plate One 16x16 Plate ($4) See Also. Macgyverisms. Miniature TP Tube Dioramas, Plus 4 Other Ideas for Reusing Toilet Paper Tubes.

Miniature TP Tube Dioramas, Plus 4 Other Ideas for Reusing Toilet Paper Tubes It may be surprising, but those cardboard toilet paper tubes are dead useful for so many things besides just keeping the circular shape of your TP roll. 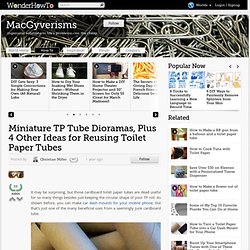 As shown before, you can make car dash mounts for your mobile phone, but that's just one of the many beneficial uses from a seemingly junk cardboard tube. You probably go through quite a bit of bathroom tissue over the course of a year, especially if you're using it for facial tissues, too. So, the next time you throw away that lonely little TP tube, make sure you think of the following five ways to reuse them. You might just end up holding onto it—even stocking up on them. Seed Starters As I mentioned before, seed starters are very useful if you're planning a home garden. Cord Holders We have all seen people use tubes as cord holders. Cord Organizer Faux Wrought Iron Clock This is quite possibly the coolest thing I've ever seen made using toilet paper tubes.