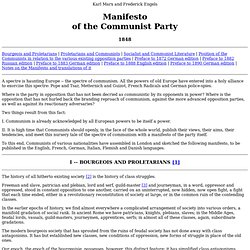 All the powers of old Europe have entered into a holy alliance to exorcise this spectre: Pope and Tsar, Metternich and Guizot, French Radicals and German police-spies. Where is the party in opposition that has not been decried as communistic by its opponents in power? Where is the opposition that has not hurled back the branding reproach of communism, against the more advanced opposition parties, as well as against its reactionary adversaries? Two things result from this fact: I. II. Portal:Politics. From Wikipedia, the free encyclopedia Politics are the process and method of gaining or maintaining support for public or common action: the conduct of decision-making for groups. 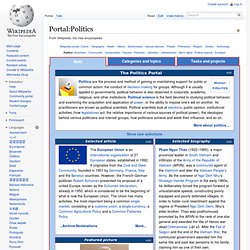 Although it is usually applied to governments, political behavior is also observed in corporate, academic, religious, and other institutions. Political science is the field devoted to studying political behavior and examining the acquisition and application of power, or the ability to impose one's will on another. Its practitioners are known as political scientists. Political scientists look at elections, public opinion, institutional activities (how legislatures act, the relative importance of various sources of political power), the ideologies behind various politicians and interest groups, how politicians achieve and wield their influence, and so on.

The European Union is an international organization of 27 European states, established in 1992. Purge server cache. Constitution of the United States - Official.

Government. Government of any kind currently affects every human activity in many important ways. 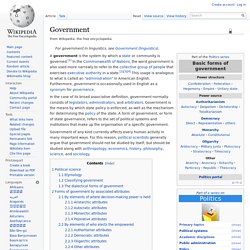 For this reason, political scientists generally argue that government should not be studied by itself; but should be studied along with anthropology, economics, history, philosophy, science, and sociology. Political science Etymology From Middle English government,[citation needed] from Old French government[citation needed] (French gouvernement), from Latin gubernatio ("management, government"). Democracy. According to political scientist Larry Diamond, it consists of four key elements: The term originates from the Greek δημοκρατία (dēmokratía) "rule of the people",[4] which was found from δῆμος (dêmos) "people" and κράτος (krátos) "power" or "rule", in the 5th century BC to denote the political systems then existing in Greek city-states, notably Athens; the term is an antonym to ἀριστοκρατία (aristokratía) "rule of an elite". 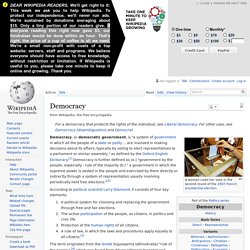 While theoretically these definitions are in opposition, in practice the distinction has been blurred historically.[5] The political system of Classical Athens, for example, granted democratic citizenship to an elite class of free men and excluded slaves and women from political participation. Democracy contrasts with forms of government where power is either held by an individual, as in an absolute monarchy, or where power is held by a small number of individuals, as in an oligarchy. 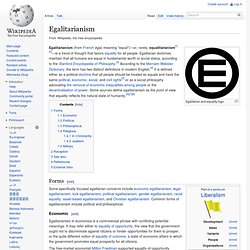 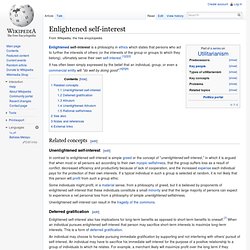 Unenlightened self-interest can result in the tragedy of the commons. Deferred gratification[edit] Enlightened self-interest also has implications for long-term benefits as opposed to short-term benefits to oneself.[7] When an individual pursues enlightened self-interest that person may sacrifice short-term interests to maximize long-term interests. Summum bonum. Plato and Aristotle[edit] Aristotle in his Nichomachean Ethics accepted that the target of human activity “must be the Good, that is the supreme good”, but challenged Plato's Idea of the Good with the pragmatic question: “will one who has had a vision of the Idea itself become thereby a better doctor or general?”. 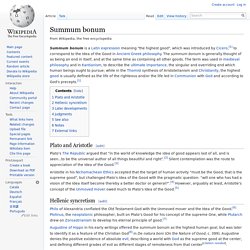 [4] However, arguably at least, Aristotle's concept of the Unmoved mover owed much to Plato's Idea of the Good.[5] Hellenic syncretism[edit] Philo of Alexandria conflated the Old Testament God with the Unmoved mover and the Idea of the Good.[6] Plotinus, the neoplatonic philosopher, built on Plato's Good for his concept of the supreme One, while Plutarch drew on Zoroastrianism to develop his eternal principle of good.[7]