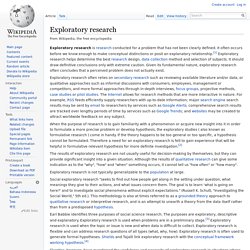 It often occurs before we know enough to make conceptual distinctions or posit an explanatory relationship.[1] Exploratory research helps determine the best research design, data collection method and selection of subjects. It should draw definitive conclusions only with extreme caution. Given its fundamental nature, exploratory research often concludes that a perceived problem does not actually exist. Exploratory research often relies on secondary research such as reviewing available literature and/or data, or qualitative approaches such as informal discussions with consumers, employees, management or competitors, and more formal approaches through in-depth interviews, focus groups, projective methods, case studies or pilot studies. The Internet allows for research methods that are more interactive in nature. 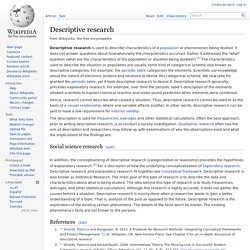 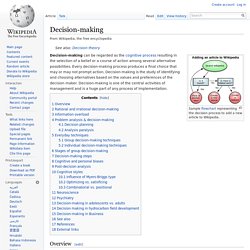 Decision-making can be regarded as the cognitive process resulting in the selection of a belief or a course of action among several alternative possibilities. Every decision-making process produces a final choice that may or may not prompt action. Decision-making is the study of identifying and choosing alternatives based on the values and preferences of the decision maker. Decision-making is one of the central activities of management and is a huge part of any process of implementation. Overview[edit] Edit human performance with regard to decisions has been the subject of active research from several perspectives: Decision-making can also be regarded as a problem-solving activity terminated by a solution deemed to be satisfactory.

Some have argued that most decisions are made unconsciously. Explanation. This description may establish rules or laws, and may clarify the existing ones in relation to any objects, or phenomena examined. 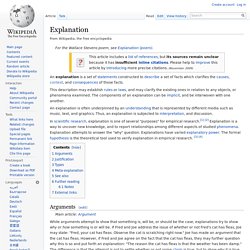 The components of an explanation can be implicit, and be interwoven with one another. In scientific research, explanation is one of several "purposes" for empirical research.[1] [2] Explanation is a way to uncover new knowledge, and to report relationships among different aspects of studied phenomena.

Explanation attempts to answer the "why" question. Explanations have varied explanatory power. The formal hypothesis is the theoretical tool used to verify explanation in empirical research. [3] [4] Arguments[edit] In this sense, arguments aim to contribute knowledge, whereas explanations aim to contribute understanding. Arguments and explanations largely resemble each other in rhetorical use. Prediction. A prediction (Latin præ-, "before," and dicere, "to say") or forecast is a statement about the way things will happen in the future, often but not always based on experience or knowledge. 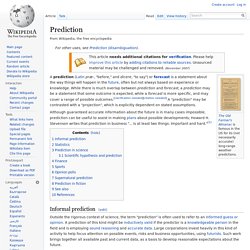 While there is much overlap between prediction and forecast, a prediction may be a statement that some outcome is expected, while a forecast is more specific, and may cover a range of possible outcomes. [clarification needed][citation needed] A "prediction" may be contrasted with a "projection", which is explicitly dependent on stated assumptions. Although guaranteed accurate information about the future is in many cases impossible, prediction can be useful to assist in making plans about possible developments; Howard H. Stevenson writes that prediction in business "... is at least two things: Important and hard. Informal prediction[edit] Outside the rigorous context of science, the term "prediction" is often used to refer to an informed guess or opinion. 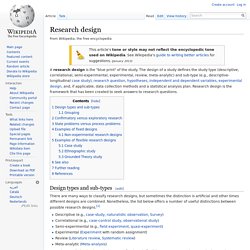 The design of a study defines the study type (descriptive, correlational, semi-experimental, experimental, review, meta-analytic) and sub-type (e.g., descriptive-longitudinal case study), research question, hypotheses, independent and dependent variables, experimental design, and, if applicable, data collection methods and a statistical analysis plan. Research design is the framework that has been created to seek answers to research questions. Design types and sub-types[edit] There are many ways to classify research designs, but sometimes the distinction is artificial and other times different designs are combined. Analysis. Analysis is the process of breaking a complex topic or substance into smaller parts in order to gain a better understanding of it. 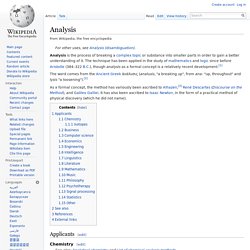 The technique has been applied in the study of mathematics and logic since before Aristotle (384–322 B.C.), though analysis as a formal concept is a relatively recent development.[1] The word comes from the Ancient Greek ἀνάλυσις (analusis, "a breaking up", from ana- "up, throughout" and lysis "a loosening").[2] As a formal concept, the method has variously been ascribed to Alhazen,[3] René Descartes (Discourse on the Method), and Galileo Galilei.

It has also been ascribed to Isaac Newton, in the form of a practical method of physical discovery (which he did not name).