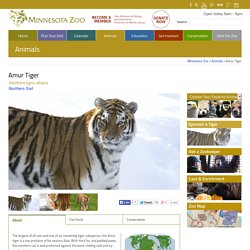 With thick fur, and padded paws, this northern cat is well protected against the bone-chilling cold and icy winds of winter. Amur tigers are carnivores. They eat mostly large mammals, especially wild boar and deer. But when food is scarce or a hunt goes badly (many do), they may turn to smaller prey such as rabbits or to carrion. Amur tigers thrive in temperate forests (similar to central and northern Minnesota) that are large and healthy enough to support abundant populations of deer and other prey. Tigers travel over extensive territories in search of food. The Amur tiger’s need for large areas of wild land, reputation as a threat to livestock and humans, and value to hunters caused its population to drop to between 20 and 30 in the 1930s. Asia Temperate Forest/Taiga Weight: 300–450 lbs Body Length: 6 to 9 ft Tail Length: up to 37½ in. 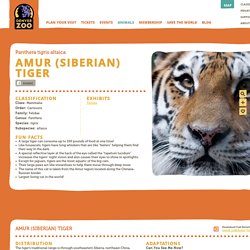 Although tigers are easy to see in most zoo settings, their distinctive stripes and coloration provide the camouflage needed for a large predator in the wild. The pattern of stripes on a tigers face is as distinctive as human fingerprints – no two tigers have exactly the same stripe pattern. Crunch Time! Tigers have canine teeth four inches long – longer canines than any other predator. Night Vision Tigers have highly developed binocular vision, which helps them gauge the distance to prey animals they are chasing. Amur tiger - Philadelphia Zoo. 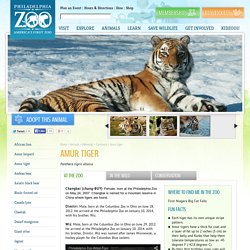 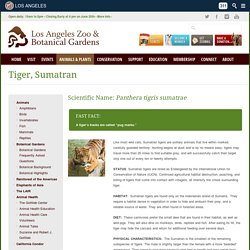 Hunting begins at dusk and is by no means easy: tigers may travel more than 20 miles to find suitable prey, and will successfully catch their target only one out of every ten or twenty attempts. Tiger Family Life. By Kathy Kranking; photos by Suzi Eszterhas/ suzieszterhas.com Check out how cute these cubs are. . . but don't get too close! 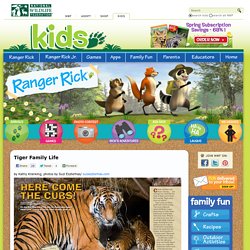 See the look on their mom's face? She's saying, "Back away from my babies! " Tiger moms are fierce protectors of their young. This mom, Rajberah (rahzh-BAIR-uh), began protecting her cubs, Nisha and Kumar, before they were even born. For the next month after the cubs were born, the family stayed in the cave. After the month they spent in the dim den, Nisha and Kumar enjoy hanging out with Rajberah in the sunshine just outside the cave's entrance. When Nisha and Kumar are about two months old, Rajberah begins taking them on short trips away from the den.

Rajberah keeps close to watch over her cubs, ready to fiercely protect them if need be. Small cubs face a lot of dangers. Even though it could be dangerous for the cubs, Rajberah has no choice but to leave them sometimes to go hunting. Tiger. Animals Mammals Panthera tigris Tigers are the largest member of the cat family. 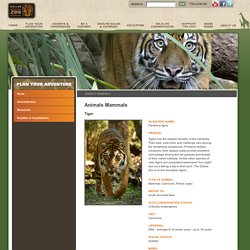 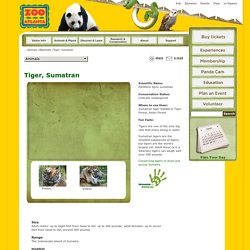 Sumatran tigers are the smallest subspecies of tigers, but tigers are the world's largest cat. Conserving tigers in Aceh and across Sumatra Size Adult males: up to eight feet from head to tail, up to 300 pounds; adult females: up to seven feet from head to tail, around 200 pounds Range The Indonesian island of Sumatra. Great Cats: Tigers. Class: MammaliaOrder:CarnivoraFamily:FelidaeSpecies: Panthera tigris A powerful hunter with sharp teeth, strong jaws, and an agile body, the tiger is the largest member of the cat family (Felidae). 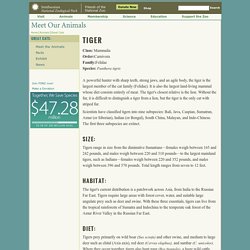 It is also the largest land-living mammal whose diet consists entirely of meat. The tiger's closest relative is the lion. Without the fur, it is difficult to distinguish a tiger from a lion, but the tiger is the only cat with striped fur. Tiger. There are currently six subspecies of tigers, each living in different habitats: flooded mangrove forests, arid forests, tropical forests, and taiga. 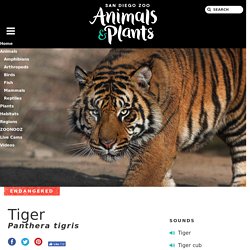