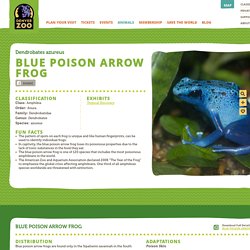 Habitat These frogs are found in warm humid rainforest areas surrounded by dry savannah and always near small streams among moss covered rocks. Physical Description The blue poison arrow frog is 1.2 to 1.8 inches (3-4.5 cm) long; females are larger than males.These frogs weigh about one-tenth of an ounce (3 grams).These frogs have azure blue on their legs, sky blue on the back and darker blue on the belly with an irregular pattern of dark blue and black spots covering their back and head. Diet What Does It Eat? In the wild: Ants, beetles, flies, mites, spiders, termites, maggots, caterpillars.At the zoo: Crickets and fruit flies. What Eats It? Adults are eaten by snakes and large spiders; tadpoles are preyed on by snakes and dragonfly larvae. 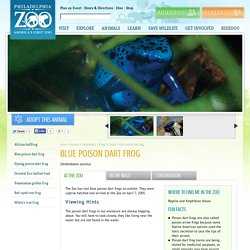 The bright blue colors of Dendrobates azureus serves as a warning to would-be predators. The skin of poison frogs is covered with toxic alkaloid poisons that can paralyze or even kill a naïve predator. The different tones of blue and the irregular pattern of dark blue and black spots covering the back and head are unique to each individual. The hands and feet of this frog also tell the story of a somewhat arboreal frog; each toe ends in a wide, flattened tip with a suction cup-like pad at each tip. 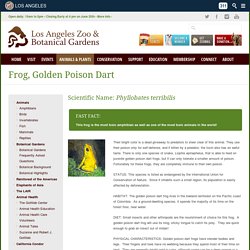 They use their poison only for self-defense, and if bitten by a predator, the toxin also has an awful taste. There is only one species of snake, Liophis epinephelus, that is able to feed on juvenile golden poison dart frogs, but it can only tolerate a smaller amount of poison. Fortunately for these frogs, they are completely immune to their own poison. STATUS: This species is listed as endangered by the International Union for Conservation of Nature. 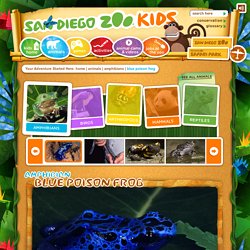 The poison frog's bright, eye-catching colors—shades of blue, red, orange, yellow, green, and black—are also a form of protection. To other animals, the colors mean "I am poisonous, so don't even think about eating me! " The Choco Indians in South America use the frogs' poison to coat the tips of the blow darts they use for hunting. You'll also hear poison frogs called "poison arrow frogs," but that's not accurate. The South American tribes that hunt with arrows usually coat their arrow tips with plant poisons, not frog poisons. The deadly poison is found in the frog's skin, making it too toxic to touch. Poison Frog. Female poison frogs lay small clutches of eggs, from 1 to 30 on average. 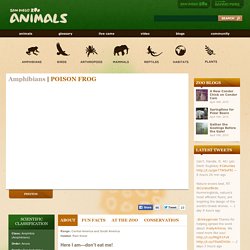 They usually deposit them in a quiet, dark, moist environment, such as in the base of a bromeliad leaf, the crook in a tree branch, or a small hole in a tree trunk. Both parents help keep the eggs moist and free from fungal growth and predators such as ants. Poison frogs are also unique among amphibians because they are very involved parents and contribute a lot of energy to caring for their eggs and offspring. For example, frogs in the Colostethus genus lay their eggs on the forest floor or on the edge of a leaf. The father guards the eggs until they hatch. Females of other species often return to their tadpoles to lay unfertilized eggs that serve as a food source for the growing youngsters.

Poison Dart Frog. Poison dart frogs are one of the planet’s most brightly colored animals. 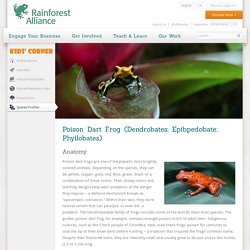 Depending on the species, they can be yellow, copper, gold, red, blue, green, black or a combination of those colors. Their showy colors and startling designs help warn predators of the danger they impose -- a defense mechanism known as “aposematic coloration.” Within their skin, they store natural venom that can paralyze, or even kill, a predator. Poison Dart Frog. Poison Dart Frog Facts. Taxonomy Order: AnuraFamily: Dendrobatidae Description: Vibrant but toxic, poison arrow frogs range from less than an inch to two and a half inches in body length. 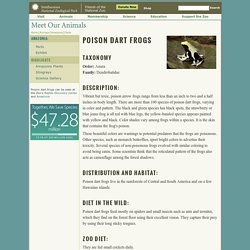 There are more than 100 species of poison dart frogs, varying in color and pattern. The black and green species has black spots, the strawberry or blue jeans frog is all red with blue legs, the yellow-banded species appears painted with yellow and black. These beautiful colors are warnings to potential predators that the frogs are poisonous. Distribution and Habitat: Blue Poison Frog. Poison dart frog. Unlike most frogs, these are active during the day. 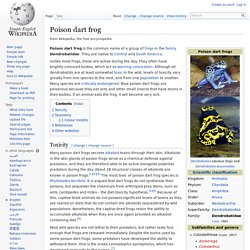 They often have brightly-coloured bodies, which act as warning colouration. Although all dendrobatids are at least somewhat toxic in the wild, levels of toxicity vary greatly from one species to the next, and from one population to another. Many species are critically endangered. Blue poison dart frogs are poisonous because they eat ants and other small insects that have toxins in their bodies. If an animal eats the frog, it will become very sick. Toxicity[change | change source] Many poison dart frogs secrete alkaloid toxins through their skin.

Most wild species are not lethal to their predators, but rather taste foul enough that frogs are released immediately. Taxonomy[change | change source] Dart frogs are the focus of major phylogenetic studies, and undergo taxonomic changes frequently. [8] Family Dendrobatidae was revised taxonomically in 2006 and contains 12 genera, with about 170 species.[9][10]