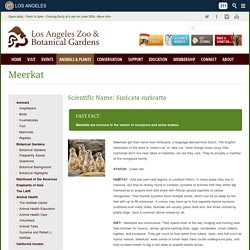 The English translation of the word is “marsh cat” or “lake cat,” even though these fuzzy little mammals don’t live near lakes or marshes, nor are they cats. They’re actually a member of the mongoose family. STATUS: Lower risk. HABITAT: Arid and semi-arid regions of southern Africa. In rocky areas they live in crevices, but they’re mostly found in complex systems of burrows that they either dig themselves or acquire from and share with African ground squirrels or yellow mongooses. DIET: Meerkats are omnivorous. PHYSICAL CHARACTERISTICS: Tannish grey fur with black stripes across the back.

The Great Society Meerkats live in matriarchal groups of 10 to 30 individuals called mobs or gangs. Meerkats. Meerkats are totally into togetherness. 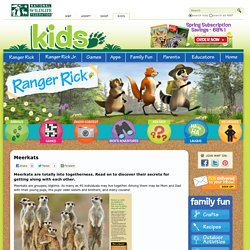 Read on to discover their secrets for getting along with each other. Meerkats are groupies, bigtime. As many as 40 individuals may live together. Among them may be Mom and Dad with their young pups, the pups’ older sisters and brothers, and many cousins! Meerkats make getting along in a group seem easy. What's a Meerkat? 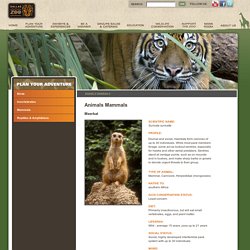 While most pack members forage, some act as lookout sentries, especially for hawks and other aerial predators. Sentries stand at vantage points, such as on mounds and in bushes, and make sharp barks or growls to denote urgent threats to their group. Mammal, Carnivore, Herpestidae (mongooses) southern Africa Least concern Primarily insectivorous, but will eat small vertebrates, eggs, and plant matter. Wild - average 15 years; zoos up to 21 years Social; highly developed interfamilial pack system with up to 30 individuals. Meerkat - HOUSTON ZOO - NATURALLY WILD. Seaworld. Meerkat. Scientific Name: Suricata suricatta Conservation Status: Lower risk, least concern Where to see them: Meerkat habitat, African Plains Fun Facts: Meerkats are immune to scorpion venom, and they can withstand up to six times the snake venom that would kill a rabbit. 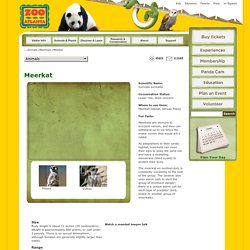 As adaptations to their sandy habitat, meerkats can close their ears to keep the sand out and have a nictitating membrane (third eyelid) to protect their eyes. The meerkat on sentinel duty is constantly vocalizing to the rest of the group. SizeBody length is about 11 inches (29 centimeters). Range Meerkats are found throughout the desert and semi-desert regions of southern Africa. Habitat Meerkats live in desert and semi-desert conditions. Lifestyle Meerkats are burrowing animals, and often make homes out of abandoned termite mounds or burrows dug by other animals. Meerkats live in a matriarchal society, which means that the dominant female is the leader of the group. Sentinel: Watches for danger. Population Status & Threats. Meerkat. Little Critter, Big Attitude Meerkats live in underground burrows in large groups of up to 30 individuals called a gang or a mob. 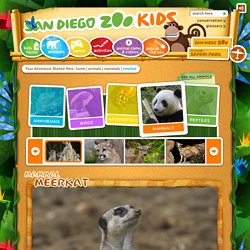 The mob is made up of several families, but one dominant female and one dominant male produce most of the babies. Adult meerkats take turns acting as guards while the others look for food. The guard climbs to the top of the highest rock, termite mound, or bush it can find. Then it stands upright on two legs to get a good look around. Meerkats have very long claws to help them dig their burrows and to uncover food. Meerkat. Unfortunately for meerkats, they are a tasty treat for larger carnivores, especially jackals, eagles, and falcons. 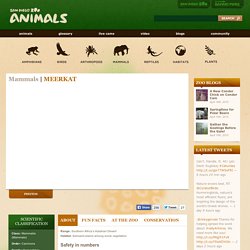 However, meerkats have developed a way to forage in relative safety: adults take turns acting as guard while the others can look for food without worries. The guard climbs to the highest rock, termite mound, or bush he or she can find, stands upright on two legs, and then announces the beginning of guard duty with a specialized call. A low, constant peeping, known as the watchman's song, is made when all is well. If a predator is spotted, the guard alerts the others with a bark or whistle. There are different calls for land predators and for those coming from the air.

Small Mammals: Meerkat. Suricata suricatta After emerging from their cool underground burrows, meerkats start each day with a sunbath. 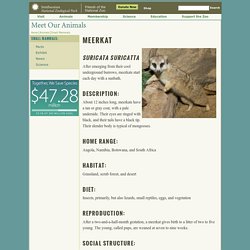 Description: About 12 inches long, meerkats have a tan or gray coat, with a pale underside. Their eyes are ringed with black, and their tails have a black tip. Their slender body is typical of mongooses. Home Range: