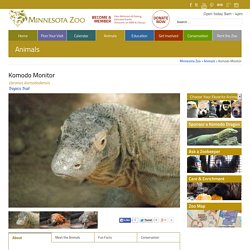 Their unusual size has evolved as the result of needing less food (a slow metabolism) and not having to compete with other carnivores on their island habitat. A top predator, their hunting strategy is based on stealth and power. Komodo dragons ambush their prey – typically boar, water buffalo, and deer – and inflict a venomous bite.

Then, using their long forked tongue to smell, they track their prey, which usually dies in a few days. Komodo Dragon - The Cincinnati Zoo & Botanical Garden. Emerging from its burrow, a Komodo dragon starts out the day with a soak in the sun. 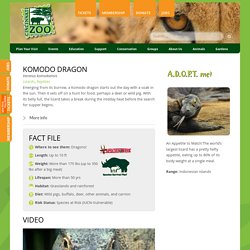 Then it sets off on a hunt for food, perhaps a deer or wild pig. With its belly full, the lizard takes a break during the midday heat before the search for supper begins. More info The Komodo dragon is the top predator on the Indonesian islands it inhabits. When it comes to a dragon’s menu, anything’s game as long as it’s made of meat, dead or alive.Tasting the air with its forked tongue, the dragon picks up the scent of prey and heads in that direction.Hiding along a trail, the dragon sits and waits. KOMODO DRAGON. Adaptations Primary Sense. 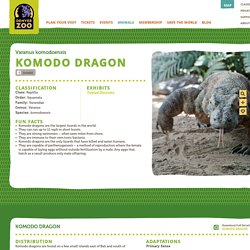 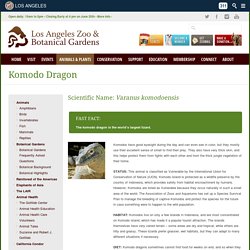 They also have very thick skin, and this helps protect them from fights with each other and from the thick jungle vegetation of their home. STATUS: This animal is classified as Vulnerable by the International Union for Conservation of Nature (IUCN). Komodo Island is protected as a wildlife preserve by the country of Indonesia, which provides safety from habitat encroachment by humans. However, Komodos are listed as Vulnerable because they occur naturally in such a small area of the world. The Association of Zoos and Aquariums has set up a Species Survival Plan to manage the breeding of captive Komodos and protect the species for the future in case something were to happen to the wild population.

HABITAT: Komodos live on only a few islands in Indonesia, and are most concentrated on Komodo Island, which has made it a popular tourist attraction. Komodo Dragons. By Marty Crump Thousands of years ago, some ancient sailors and traders visited faraway islands in the Indian Ocean. 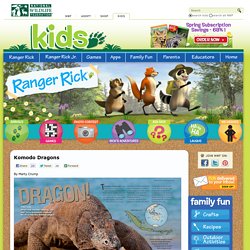 Imagine their surprise—and horror—when they saw reptiles like this one, nearly the size of gators. They probably returned home and told tales of monsters that flicked long, forked tongues in and out of drool-dripping mouths. These huge beasts might even have inspired stories of imaginary fire-breathing dragons. Komodo (kuh-MOH-doh) dragons are lizards—the largest lizards in the world. Komodo dragons eat just about any meat they can find—dead or alive—from rats to deer to huge water buffalo. Komodo Dragon - HOUSTON ZOO - NATURALLY WILD. Male Komodo dragons can grow up to 10 feet and weigh 170 pounds. 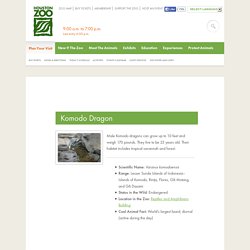 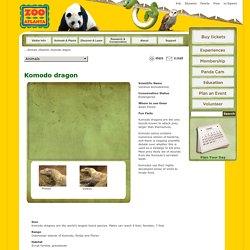 Komodo saliva contains numerous strains of bacteria, and there is ongoing scientific debate over whether this is used as a strategy to kill prey. Komodos use their highly developed sense of smell to locate food. Komodo Dragon. Meat Seekers Most lizards are omnivores, but not Komodo dragons. 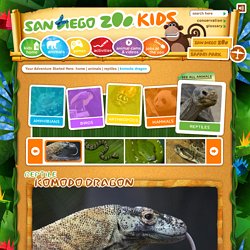 Meat is what they seek. Inside a Komodo dragon's mouth are about 60 short, sharp teeth that easily cut and tear flesh. Komodo dragons use their long, forked tongues to pick up smells in the air. An adult Komodo dragon hides along a trail and waits for an unsuspecting creature to walk by; then it attacks with its sharp claws and dangerous teeth. Komodo Dragon. A vulnerable dragon The magnificent Komodo dragon is vulnerable. 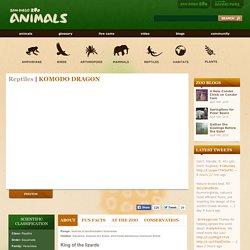 Some might think that the largest lizard in the world wouldn’t have to worry about its safety. One study estimated the population of Komodo dragons within Komodo National Park to be 2,405. Another study estimated between 3,000 and 3,100 individuals. On the much larger island of Flores, which is outside the National Park, the number of dragons has been estimated from 300 to 500 animals. What we've learned In 1994, the San Diego Zoo received six young Komodo dragons on loan from the Cincinnati Zoo.

Our research San Diego Zoo Global has a research and conservation program to help these carnivorous giants. Before we started this project, many basic pieces of information that are needed to manage and conserve Komodo dragons were unknown, including how many Komodo dragons live on each island, how different he populations are among the islands, and if the dragons move much among islands. Reptiles. Donate Now Shop Animal Index Related Resources. 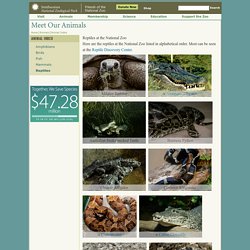