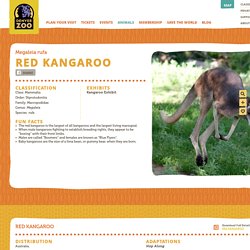 Habitat The open plains, scrubland, grassland and desert of central Australia. Physical Description Male red kangaroos stand about six feet (1.8 m) tall and females are smaller standing about three and a half feet (1.1 m) tallMales weigh up to 175 pounds (80 kg), and females seldom weighing more than 75 pounds (34 kg).Males have red-brown fur while females are more blue-gray in color.Kangaroos have powerful Z-shaped hind legs and a strong tail used to help balance the body as they hop.They have shortened upper limbs with clawed paws.They have a narrow head, long nose and long pointed ears.Females have a forward facing pouch and four nipples. Diet What Does It Eat? In the wild: Grasses, leaves, roots and low, herbaceous plants.At the zoo: Hay, grain and vegetables as well as vitamin and mineral supplements. 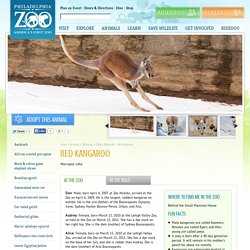 He is the largest, reddest kangaroo on exhibit. He is the sire (father) of the Bouncepants Dynasty: Irene, Sydney, Hunter Bounce-Pence, Urban, and Arlo. Audrey: Female, born March 15, 2010 at the Lehigh Valley Zoo, arrived at the Zoo on March 22, 2011. She has a dye mark on her right hip. She is the dam (mother) of Sydney Bouncepants. Red Kangaroos. By Kathy Kranking A red kangaroo may look like a blend of different animals, but it's a kangaroo, through and through. 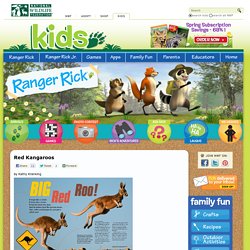 This hopper is the largest of all roos, standing about as tall as a human grownup. Its hops are big, too. With long, strong legs like pogo sticks, a red roo can travel 25 feet in a single leap. That's about as far as six 10-year-old kids lying head to toe along the ground. A red roo's thick tail is almost as long as its body. Kangaroos can't move their legs separately. Red kangaroos live in the grasslands and deserts of Australia. To keep cool in their warm home, red roos do a weird thing: they wet their arms with saliva. As the sun begins to go down, roos get up. Red kangaroos live in areas that get hot during the day and have little rain. Red roos also keep cool by "chilling out. " You might say that red kangaroos have this next trick "up their sleeves.

" And the last thing red roos do to stay cool? Kangaroo, Red. Scientific Name: Macropus rufus Conservation Status: Common Where to see them: Outback Station Fun Facts: The red kangaroo gets it name from the color of its fur. 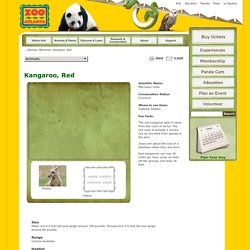 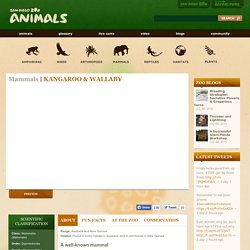 In fact, large kangaroos are the Australian equivalent of bison, deer, and cattle. All macropods use their hands to pull down branches to reach leaves and have a chambered stomach that works much like the stomach of ruminants like goats and sheep. They can bring the vegetation they've recently swallowed back up from one chamber, chew it as cud, and then swallow it again for final digestion. Larger kangaroos tend to feed in mobs, though the group size depends on the amount and quality of food that is available. Most kangaroos and wallabies are grazers, clipping grasses with their teeth as they roam the Australian savanna. At the San Diego Zoo, the tree kangaroos are offered herbivore pellets, a handful of high-fiber biscuits, vegetables, and daily browse.