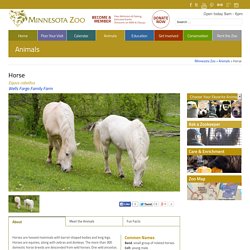 Horses are equines, along with zebras and donkeys. The more than 300 domestic horse breeds are descended from wild horses. One wild ancestor, the Asian Wild Horse, can be found on the Zoo’s Northern Trail. Horses are herbivores, or plant-eaters. With their long necks and specialized teeth, they graze for grasses in pastures or in the wild. 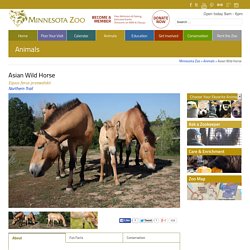 The Minnesota Zoo and other organizations around the world have cooperated to breed zoo animals and reintroduce their offspring to native lands. Today nearly 500 Asian wild horses again roam the grasslands of China, Mongolia, and Kazakhstan. Asian wild horses eat coarse, shrubby plants and tall grasses. The grassy steppes of Eurasia are the Asian wild horse’s historic range, though in recent years humans have forced it to the borders of the stony, sandy Gobi desert. Asian wild horses live in small herds, with a stallion, several mares, and young animals traveling together as they roam the grasslands in search of food to eat. Minnesota Zoo Horse - Minnesota Zoo. Przewalski's Horse Facts. Pronounciation: sheh-val-skee Physical Description: The coat of the Przewalski's horse ranges from brown to dun, with a pale underbelly and muzzle, a dark tail, a dorsal stripe, striped legs, and a dark, short mohawk–like mane. 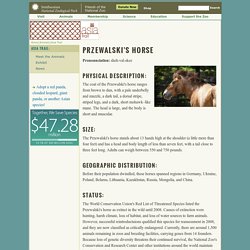 The head is large, and the body is short and muscular. Size: The Przewalski's horse stands about 13 hands high at the shoulder (a little more than four feet) and has a head and body length of less than seven feet, with a tail close to three feet long. Geographic Distribution: Przewalski's Horse. Galloping ghosts Przewalski's horses are native to a habitat called the steppe. 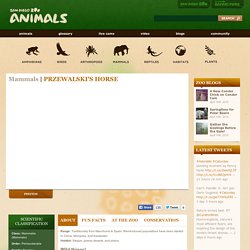 Until 15,000 years ago, this immense and hardscrabble, sparse grassland habitat stretched from the east coast of Asia to present-day Spain and Portugal. After the last Ice Age, however, the steppe gave way to woods and forests to which Przewalski's horses weren't well adapted. By the 19th century, the few animals that remained were confined to Mongolia, southern Russia, and Poland. In the early 20th century, farmers and livestock took over good grazing lands, forcing the Przewalski's horses into areas that weren't suitable for human use. Wealthy aristocrats and westerners were fascinated by the unusual horses and captured foals to keep as pets. Przewalski's Horse. Distribution This wild horse once roamed throughout Europe and Asia. 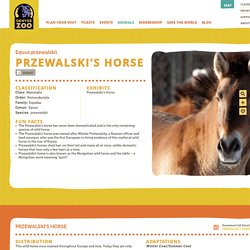 Today they are only found on reserves in Mongolia and China and in zoos around the world. Habitat They originally roamed the steppe regions of Eurasia, but the last wild herds retreated to the deserts. Physical Description They weigh 550-850 pounds (247-383 kg).Przewalski’s horses stand 12-14 hands or 48-58 inches (120-146 cm) tall at the shoulder.They have tan to reddish brown fur with white on the belly, dark brown on the lower legs and a white muzzle.They have a stiff, dark brown mane.Przewalski’s horses have a stocky build with short legs. Diet What Does It Eat? Miniature Domestic - Los Angeles Zoo. In the 18th century, miniature horses were used to pull carts in the coal mines in Northern Europe. 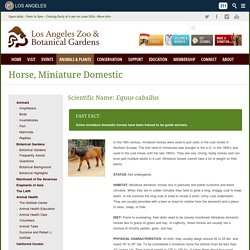 The first herd of miniatures was brought to the U.S. in the 1930’s and used in the coal mines until the late 1950’s. They are very strong, hardy horses and can even pull multiple adults in a cart. Miniature horses cannot take a lot of weight on their backs. STATUS: Not endangered. HABITAT: Miniature domestic horses live in pastures and prefer sunshine and warm climates. DIET: Prone to overeating, their diets need to be closely monitored. PHYSICAL CHARACTERISTICS: At birth, they usually weigh around 20 to 25 lbs. and stand 16” to 20” tall. Fit for a King Miniature Horses were first bred in the 1600’s for Europe’s nobility.