RIVER HIPPOPOTAMUS. Distribution Historically the river hippopotamus ranged through Africa south of the Sahara, however most populations have been reduced or exterminated. 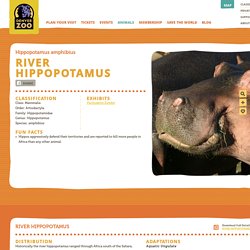 Most hippos are in the Nile river valley of east Africa. Habitat Swamps or grasslands that surround deep rivers and lakes. Physical Description Hippos have a head-body length up to 12 feet (4.3 m) long.Females weigh about 2,800 pounds (1260 kg), males are larger weighing 3,200-6,400 pounds (1,440-2,800 kg).Hippos have gray to slate brown skin that is up to two inches thick. Diet What Does It Eat? In the wild: GrassesAt the zoo: Grass, hay, grain, plus vitamin and mineral supplements What Eats It? Saint Louis Zoo. Fat -- but Fast! 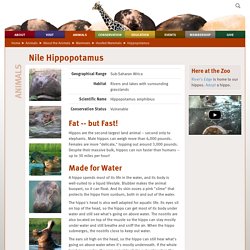 Hippos are the second-largest land animal -- second only to elephants. Male hippos can weigh more than 6,000 pounds. Females are more "delicate," topping out around 3,000 pounds. Despite their massive bulk, hippos can run faster than humans -- up to 30 miles per hour! Made for Water A hippo spends most of its life in the water, and its body is well-suited to a liquid lifestyle. The hippo's head is also well adapted for aquatic life. The ears sit high on the head, so the hippo can still hear what's going on above water when it's mostly underneath. And one more way a hippo is adapted for life in the water: it can hold its breath for up to five minutes. 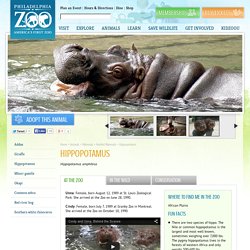 They have specialized pores that ooze an oily pink substance, which protects their sensitive skin from water loss and sunburn. Early explorers thought that hippos sweat blood, but what they were seeing was really this secretion. Their bodies are barrel shaped and their legs are short, but they are surprisingly quick both on land and in the water. Their eyes, ears and nostrils are all set up high on the top of their heads so that they can remain safely submerged, just barely breaking the surface to survey their surroundings. Hippos have enlarged incisors and long, curved lower canines (tusks) that grow continuously throughout the animal's life.

Longevity In captivity and in the wild, hippos are long-lived animals that mature slowly and have calves every other year. Reproduction After a gestation of about 8 months a female hippo gives birth to a single calf either on land or in shallow water. Behavior. Los Angeles Zoo and Botanical Gardens Hippopotamus - Los Angeles Zoo and Botanical Gardens. The hippo is the “King of the River,” spending most of its time in the water, coming out to graze at night on the grass. 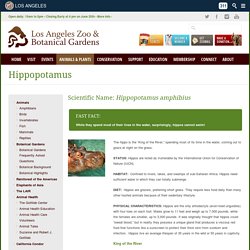 STATUS: Hippos are listed as Vulnerable by the International Union for Conservation of Nature (IUCN). HABITAT: Confined to rivers, lakes, and swamps of sub-Saharan Africa. Hippos need sufficient water in which they can totally submerge. DIET: Hippos are grazers, preferring short grass. They require less food daily than many other hoofed animals because of their sedentary lifestyle. PHYSICAL CHARACTERISTICS: Hippos are the only artiodactyls (even-toed ungulates) with four toes on each foot. King of the River Hippos live in pods of 10 to 150 individuals. Females give birth away from the herd, while submerged underwater. The hippo can remain submerged water for five minutes at a time, closing its ears and nostrils. A whole ecosystem depends on the mighty hippos; for example, their dung provides nutrition for many species, from invertebrates to fish. 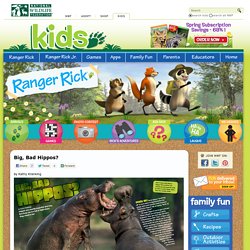 But they can be full of fight when they need to be! Check out these hippos “mouthing off” at each other! Seaworld. Hippo. Our first hippos Puddles was the San Diego Zoo’s first hippopotamus; born on July 8, 1935, at the Brookfield Zoo outside of Chicago, he arrived here in August 1936, becoming the first hippo to be exhibited by a zoo on the West Coast. 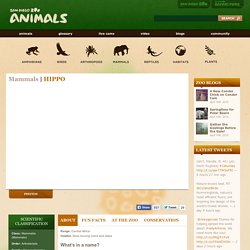 He became quite the viewing sensation. Rube and Ruby were popular from the moment they arrived in 1940 as youngsters from the Calcutta Zoo in India. The pair produced 11 offspring during their time together, with their first calf born in 1943. Hippos have an average life span of 25 to 30 years in the wild, but Rube’s 51 years made him one of the oldest hippos in zoos. A wonderful pool By 1986, the 50-year-old hippo exhibit was showing its age, and a decision was made to close it until it could be replaced with an up-to-date facility. Our hippos today We currently have a pair of these impressive giants. Our adult male, Otis, is a “lightweight” for an animal that can reach a weight of 4 tons (3.6 tonnes); he tips the scale at 3,900 pounds (1,770 kilograms).