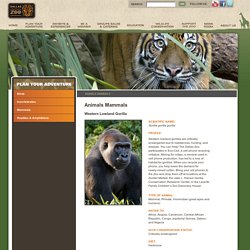 You can help! The Dallas Zoo participates in Eco-Cell, a cell phone recycling initiative. Mining for coltan, a mineral used in cell phone production, has led to a loss of habitat for gorillas. Gorilla. Gorillas have been a popular part of the San Diego Zoo and San Diego Zoo Safari Park’s animals. 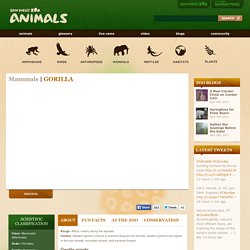 A 1936 issue of our member magazine, ZOONOOZ, stated, “More people ask for the gorillas than for any single exhibit, even more than inquire about the penguins.” We don’t have penguins here anymore, but we still have gorillas! Gorillas at the Zoo The Zoo’s first gorillas arrived here as youngsters in 1931, captured in the mountains of what was then the Belgian Congo in Africa in 1930 by famed explorers Martin and Osa Johnson and paid for by a generous donation from early Zoo benefactors Ellen B. Scripps and her nephew, Robert P. Scripps. Another famous gorilla resident at the Zoo was Albert. Gorilla. Scientific name: Gorilla gorilla gorilla Conservation Status: Western lowland gorillas are critically endangered, with approximately 100,000 remaining in the wild. 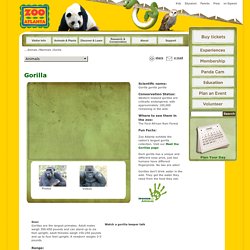 Where to see them in the zoo: The Ford African Rain Forest Fun Facts: Zoo Atlanta exhibits the nation’s largest gorilla collection. Visit our Meet the Gorillas page Each gorilla has a unique and different nose print, just like humans have different fingerprints. Gorillas don’t drink water in the wild. Size: Gorillas are the largest primates. Range: Western lowland gorillas live in the tropical forests of West Africa. Lifestyle: Gorillas live in groups called troops. Diet: Gorillas are herbivores (plant eaters). Lifecycle: Gorillas are born after approximately 9 months of gestation (just like humans). Both males and females often leave the group they are born in, usually at the time they reach sexual maturity (roughly 8-10 years old for females and 13-15 for males).

San Diego Zoo. In the very heart of the San Diego Zoo, you’ll find western lowland gorillas in a natural landscape of cascading waterfalls, an open meadow, and climbing areas. 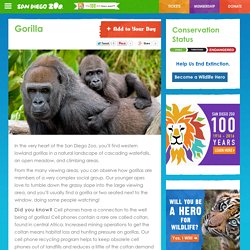 From the many viewing areas, you can observe how gorillas are members of a very complex social group. Our younger apes love to tumble down the grassy slope into the large viewing area, and you’ll usually find a gorilla or two seated next to the window, doing some people watching! Did you know? Cell phones have a connection to the well being of gorillas! Cell phones contain a rare ore called coltan, found in central Africa. Western Lowland Gorilla. Gentle Giants What’s one of the first things you notice about gorillas? 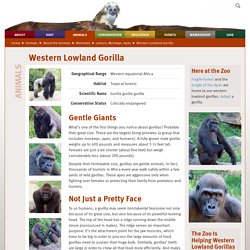 Probably their great size. These are the largest living primates (a group that includes monkeys, apes, and humans). A fully-grown male gorilla weighs up to 400 pounds and measures about 5 ½ feet tall. Females are just a bit shorter (about five feet) but weigh considerably less (about 200 pounds). Despite their formidable size, gorillas are gentle animals. Not Just a Pretty Face. Western lowland gorilla - Philadelphia Zoo. Los Angeles Zoo and Botanical Gardens Gorilla, Western Lowland - Los Angeles Zoo and Botanical Gardens. Gorillas are the strongest and largest of the great apes, a primate group that also includes chimpanzees, bonobos, and orangutans. 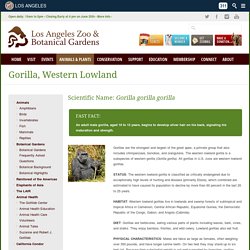 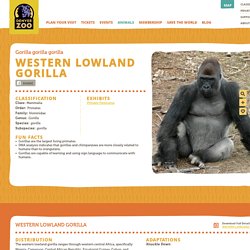 Habitat Lowland, swamp, tropical and montane secondary forests from sea level to 5,249 feet (1,600 m). Physical Description Western lowland gorillas are four and a half to five and a half feet (1.4-1.75 m) tall.Males weigh 300-600 pounds (136-272 kg), females are smaller weighing 154-300 pounds (70-136 kg).Their fur is predominantly black with a brownish tinge and a reddish-brown cap on top of the head.Adult males develop silver colored fur on their backs.They have an opposable thumb on their hands and an opposable big toe on their feet. Diet. Meet the Zoo's Western Lowland Gorillas. The Smithsonian’s National Zoo is home to six western lowland gorillas that reside in two groups at the Great Ape House. 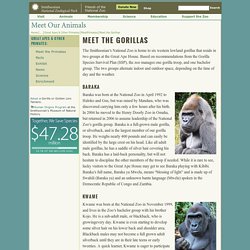 Based on recommendations from the Gorilla Species Survival Plan (SSP), the zoo manages one gorilla troop, and one bachelor group. The two groups alternate indoor and outdoor space, depending on the time of day and the weather. Baraka Baraka was born at the National Zoo in April 1992 to Haloko and Gus, but was raised by Mandara, who was discovered carrying him only a few hours after his birth. In 2004 he moved to the Henry Doorly Zoo in Omaha, but returned in 2006 to assume leadership of the National Zoo’s gorilla group. Kwame.