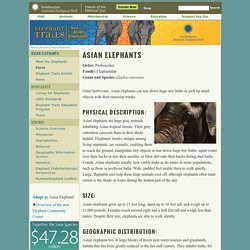 Physical Description: Asian elephants are huge gray animals inhabiting Asian tropical forests. Their gray coloration conceals them in their shady habitat. Elephants' trunks, unique among living mammals, are versatile, enabling them to reach the ground, manipulate tiny objects or tear down huge tree limbs, squirt water over their backs or into their mouths, or blow dirt onto their backs during dust baths. Size: Asian elephants grow up to 21 feet long, stand up to 10 feet tall, and weigh up to 11,000 pounds. Geographic Distribution: Asian elephants live in large blocks of forest near water sources and grasslands, habitat that has been greatly reduced in the last half century. Status: The Asian elephant is listed as endangered on the World Conservation Union's (IUCN's) Red List of Threatened Animals. 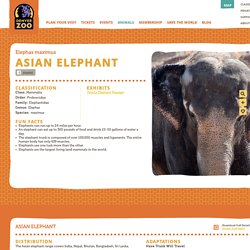 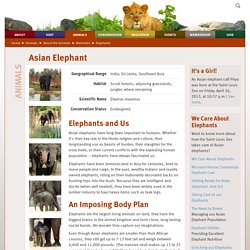 Whether it's their key role in the Hindu religion and culture, their longstanding use as beasts of burden, their slaughter for the ivory trade, or their current conflicts with the exploding human population -- elephants have always fascinated us. Elephants have been domesticated in Asia for centuries, bred to move people and cargo. In the past, wealthy Indians and royalty owned elephants, riding on their elaborately decorated backs on hunting trips into the bush. Because they are intelligent and docile (when well treated), they have been widely used in the lumber industry to haul heavy items such as teak logs. An Imposing Body Plan Elephants are the largest living animals on land, they have the biggest brains in the animal kingdom and form close, long-lasting social bonds. Asian Elephant - Los Angeles Zoo. The elephant is the world’s largest living land mammal. 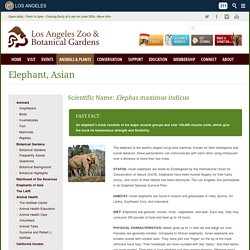 Known for their intelligence and social behavior, these pachyderms can communicate with each other using infrasound over a distance of more than two miles. STATUS: Asian elephants are listed as Endangered by the International Union for Conservation of Nature (IUCN). Elephants have been hunted illegally for their tusks (ivory), and much of their habitat has been destroyed. The Los Angeles Zoo participates in an Elephant Species Survival Plan. Asian Elephant. The Houston Zoo is home to a family of Asian elephants, who reside in the expansive McNair Asian Elephant Habitat. 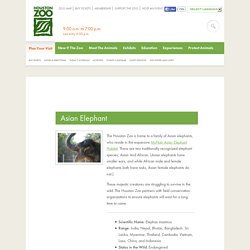 There are two traditionally recognized elephant species; Asian And African. (Asian elephants have smaller ears, and while African male and female elephants both have tusks, Asian female elephants do not.) These majestic creatures are struggling to survive in the wild. The Houston Zoo partners with field conservation organizations to ensure elephants will exist for a long time to come. How We Help Save Wild Elephants The Houston Zoo helps organizations in Africa who are working to stop elephant poaching and the illegal ivory trade. The Houston Zoo helps organizations in Borneo working to save the endangered Asian elephants there. Elephants. Not long ago, Ranger Rick ran a story about Marie Galloway, the elephant keeper at the Smithsonian's National Zoo. 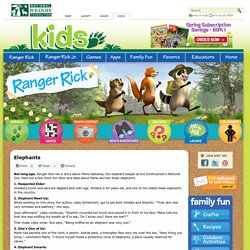 Here are a few more fun facts and tales about Marie and her Asian elephants. 1. Respected Elder: Ambika's trunk and ears are dappled pink with age. Ambika is 60 years old, and one of the oldest Asian elephants in the country. 2. Soon afterward," Libby continues, "Shanthi uncurled her trunk and waved it in front of my face. That made Libby smile. 3. 4. One time Shanthi wanted to get at a tasty-looking branch hanging high over her yard, but she couldn't reach it. " African Elephant. Animals Mammals Loxodonta africana The African elephant is the largest living terrestrial mammal! 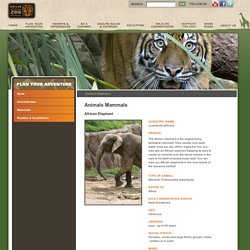 They usually only seek water once per day. When it gets too hot, you may see an African elephant flapping its ears to create air currents over the blood vessels in the ears to rid itself of excess body heat. You can view our African elephants in the new Giants of the Savanna exhibit! Mammal, Proboscidea (elephants) Africa Near threatened Herbivore zoos - up to 65 years Females - herds and large family groups; males - solitary or in pairs. African Elephant.